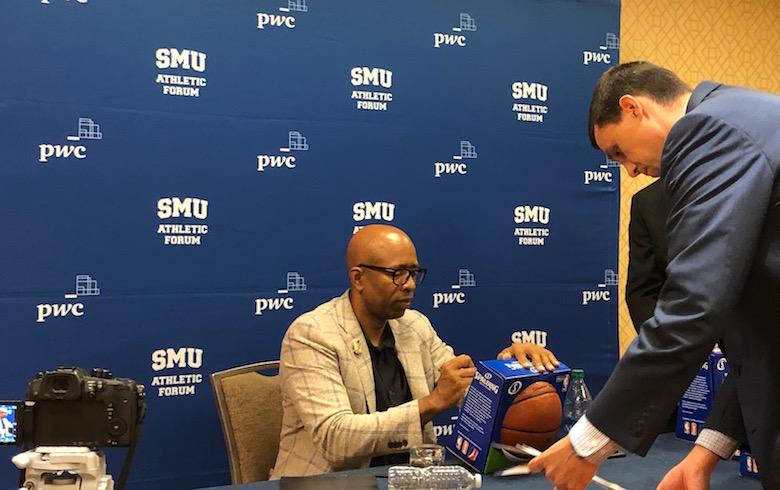 SMU Athletics and PwC hosted the 30th annual PwC SMU Athletic Forum at the Hilton Anatole downtown on Sept. 25, honoring former NBA first-round draft pick and Emmy-winning basketball analyst Kenny Smith. The forum, founded in 1989, is a celebration of individuals who have been successful in sports, and serves as a way to connect them with sports fans in the Dallas area.

Smith, nicknamed “The Jet” for his speed on the court, spoke about the current state of the NBA while also reminiscing about his own basketball career at the Athletic Forum.

As a player at the University of North Carolina, Smith played alongside basketball legend Michael Jordan. Smith called Jordan one of the best players he has ever seen.

“This is when you know you’re really good, when you put fear into players who you don’t guard,” Smith said. “Even centers were always like ‘Where’s Michael Jordan?’”

He also joked about the rivalry between his alma-mater UNC and their neighbor, Duke University, referring to Duke only as “that school in Durham.” However, he did compliment former Duke star and 2019 number one draft pick Zion Williamson.

“I think Zion is gonna have to find a niche, cause [sic] what he does doesn’t exist,” Smith said. “The way he plays, there’s no one in the history of the game that plays that way.”

Smith also complemented another young NBA player, Dallas Mavericks point guard Luka Doncic. Even after a stellar first season in which he was awarded the NBA Rookie of the Year award, Smith thinks Luka has even more potential as a player if he becomes more elusive and makes more 3-point shots.

“If he improves on those things he will take that next step to possibly being an All-Star,” Smith said.

“He’s Hall of Fame, obviously. Not too many guys play on one team anymore,” Smith said.

Smith himself played for six teams in his ten-year career in the NBA, winning two championships with the Houston Rockets before becoming a sports broadcaster in 1998. Smith currently works alongside Ernie Johnson, Charles Barkley and Shaquille O’Neal on “Inside the N.B.A” on TNT.

“It starts way before we even get onto the set,” Smith said regarding working with his friends on-air. “The conversation sometimes comes from the back and bleeds onto the show, and people watching are like ‘that has nothing to do with basketball.’”

As for his future, Smith said that he can see himself one day becoming a coach.

“I think coaching, front office is definitely something thats in the cards in the future,” Smith said. “I think I could put a championship team together.”

But for now, Smith is happy with his TV gig.

“I’m having a lot of fun messing with Charles and Shaq,” Smith said.