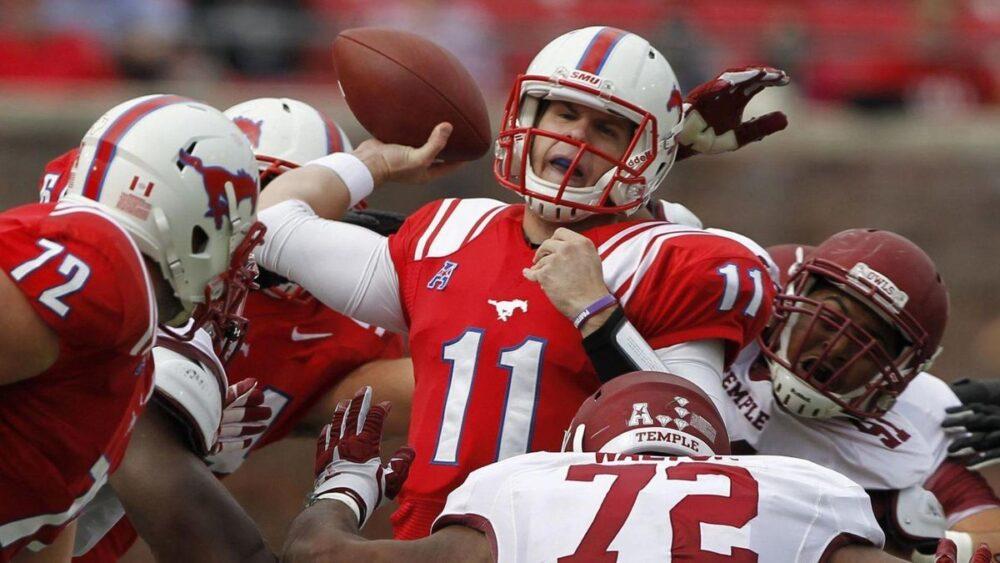 Former SMU quarterback Garrett Gilbert got his first career NFL start for the Dallas Cowboys today in a 24-19 loss to the undefeated Pittsburgh Steelers.

He completed 21-of-38 passes for 243 yards with a touchdown, while adding an interception. Gilbert had his team driving for the game-winning touchdown to end the game.

Gilbert got the start for the Cowboys after third-string quarterback Ben DiNucci struggled in his first career start against Philadelphia last week. The presumed starter Andy Dalton remains on the COVID-19 list, opening a unique door for Gilbert.

The former Mustang is the seventh quarterback to have played high school, college and professional football for a team in the state of Texas. This list includes SMU alumni Don Meredith and John Roach along with Wade Wilson, Stephen McGee, Case Keenum and Dalton.

Gilbert was the 2009 Gatorade Male High School Athlete of the Year at Lake Travis High School in Austin, Texas and decided to stay in his hometown to start his collegiate career with Texas. After playing sparingly in his freshman season, Gilbert earned the starting quarterback position in 2010. He led the team to a 5-7 record and was replaced the following season after a shoulder injury sidelined him.

Once it became apparent that his job was lost at Texas, Gilbert transferred to SMU for the 2012 season and immediately won the starting quarterback job under head coach June Jones. In two seasons for the Mustangs, he was 12-13 as the starter and led the Mustangs to the 2012 Hawaii Bowl against Fresno State where they won 43-10. Gilbert holds the SMU records for passing yards and total touchdowns in a game.

After he graduated, Gilbert was drafted in the sixth round of the 2014 NFL Draft by the St. Louis Rams. He was released before the season started and wound up on the team’s practice squad before being cut in October. He then bounced around to several teams including the New England Patriots, Detroit Lions, Oakland Raiders and Carolina Panthers, playing in just one game across his time with these teams.

Gilbert’s stock then rose in the Alliance of American Football (AAF) as the starting quarterback for the Orlando Apollos in 2019. He led the league in passing yards, completions and passer rating before operations were suspended after eight weeks. His play in the AAF was good enough to get another chance in the NFL as he signed with the Cleveland Browns shortly after the AAF folded.

In Cleveland, Gilbert’s tenure was also short-lived, playing in just one game for the team in relief of Baker Mayfield in Week 5 of 2019 in blowout loss. He stayed on the team’s roster through that season but was relegated to the practice squad on Sept. 6, 2020.

After Dak Prescott suffered a season-ending ankle injury against the New York Giants in Week 5, the Cowboys signed Gilbert from the Browns’ practice squad sending him back to the state of Texas.