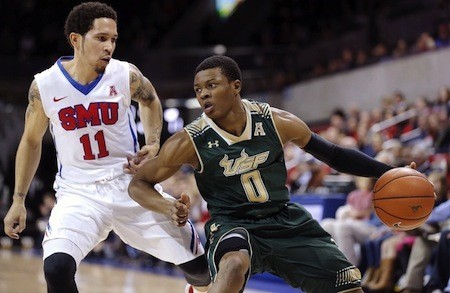 SMU basketball continues to hit the transfer jackpot with another high-profile addition.

Per CBS Sports Jon Rothstein, former South Florida shooting guard Jahmal McMurray committed to SMU on Friday afternoon. McMurray is the sixth player to transfer to SMU since Larry Brown took over the program in 2012.

Former South Florida guard Jahmal McMurray has committed to SMU, he tells me. Will be eligible in December of 2017. Currently in JUCO.

247Sports.com’s composite rankings listed McMurray as a three-star prospect when the 6-1 guard committed to the Bulls in October 2014. McMurray had also received offers from Southern Illinois, Texas-Pan American, Sam Houston State and Liberty, as well as interest from Kansas, Kansas State, Wichita State, Memphis and Creighton.

In his freshman season in Tampa, McMurray averaged 15.2 points per game and 2.5 assists per game while averaging 35 minutes per game – all team bests. McMurray was elected to the American Athletic Conference All-Rookie team.

McMurray is a great shooter on the ball. Was averaging 20 points per game when he left South Florida. Nice get for Tim Jankovich & Co. #SMU https://t.co/UJwtJmzDud

McMurray was suspended for the first six games of the 2016-17 season for an undisclosed violation of team rules. In three games, McMurray averaged 20.3 ppg. He announced he would leave South Florida in December. South Florida’s men’s basketball program is currently being investigated by the NCAA for alleged academic fraud.

McMurray will be eligible to play for the Mustangs in December of 2017. He will have either one and a half or two years of eligibility remaining depending on whether he sits out conference play of next season. McMurray is not enrolled at SMU at this time, electing to take online classes at a local college.