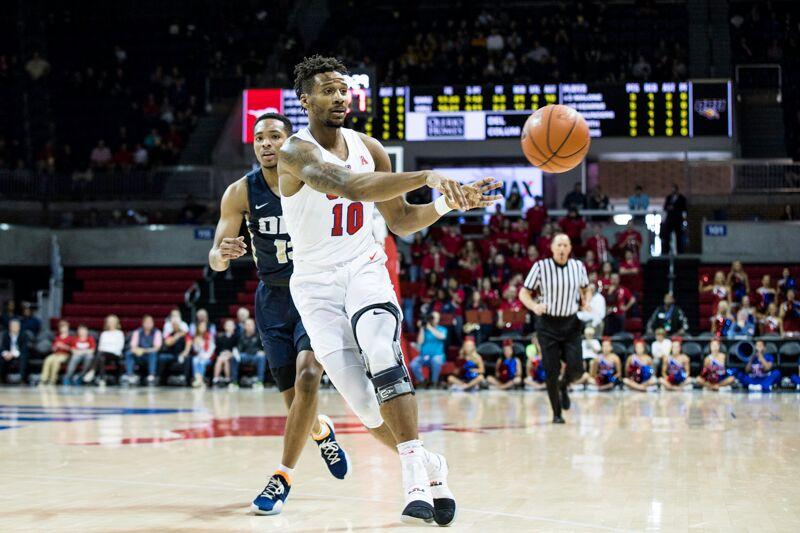 Jarrey Foster’s four-year career at Moody Coliseum included thrilling highlights and eruptions from raucous crowns; but it ended without much of either Sunday afternoon, as SMU lost 67-55 to Wichita State on senior day.

Foster returned Sunday after missing SMU’s last 10 games with a knee injury and played 20 minutes, scoring seven points. The Mustangs trailed by 17 in the first half and the contest never got much closer.

Meanwhile, Sunday’s loss was SMU’s eighth in nine games. The Mustangs sit in ninth place in the American Athletic Conference, behind schools like South Florida and Tulsa, schools they used to dominate. But for Foster, the bad times stand out as much as the good.

SMU honored seniors Jahmal McMurray, Nat Dixon and James Pyle along with Foster. McMurray and Dixon both transferred to SMU, while Pyle played three years on the Hilltop as a walk-on. The players spoke strongly of the bonds they formed while at SMU.

“There wasn’t a day (at SMU) where I didn’t feel like I was loved,” Dixon said. “These boys are like my family.”

Tim Jankovich started all four of his seniors. The group, along with Isiaha Mike, went down 7-2 before Jankovich pulled Pyle. The rest of the first half did not go much better for the Mustangs, as they went to halftime trailing 41-28.

After a stretch where SMU scored eight straight points, Wichita State went on a 17-4 run, scoring just about every time down the court. SMU’s defenders were late on rotations and soft inside, allowing the Shockers to get clean looks.

SMU was not able to get its deficit inside single digits in the second half, and a big reason why was its shooting. The Mustangs finished the contest 3-26 from 3-point range, despite getting plenty of good looks. The team’s offense has leaned on 3-pointers heavily the whole year, and its inconsistent shooting has been a big reason for its lack of success. Sunday, it wasn’t Wichita State’s defense that was giving SMU trouble. Open shots weren’t falling.

“We missed a lot of wide open shots,” Tim Jankovich said. “I think we’re pressing. If they were jacking double-teamed, guarded 3s that’s one thing but you look up and a guy’s pretty naked.”

SMU was also missing guard Jimmy Whitt with a shoulder injury. Whitt has been one of the team’s best players on both ends, averaging 12 points, 6.6 rebounds and 4.1 assists on the season. He was the team’s point guard and was often tasked with covering the opponent’s best perimeter scorer. Jankovich does not know if he will return.

The loss is another big blow for an SMU team that didn’t have Foster for much of this season. It also won’t have him or McMurray, who scores a team-high 18 points per game, next year. The program has a long way to go to re-attain the heights it reached at the beginning of Foster’s career.