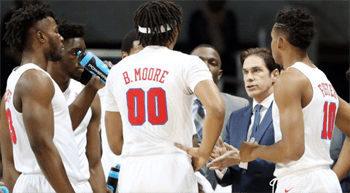 After drawing interest from top programs as a junior, Foster was poised for a breakout senior season. That is, until he tore his ACL. The Houston native rode the bench with injury his senior year, never receiving the interest he might have garnered if not for his injury. Foster committed to Rice in the summer before his final year of high school.

When Foster reopened his recruitment, Larry Brown came calling. The program had stolen the best recruit in the state that nobody knew about when Foster committed to SMU in October of 2014.

While the man that recruited him is gone, Foster’s dream of playing high major college basketball is being realized. On a Mustangs squad with a short bench, everyone is stepping up their contributions. Everyone including Foster, who has always prided himself in trying to be the best defensive player at SMU. But the sophomore guard is beginning to flourish in other areas, as evident in the Mustangs’ 84-65 win over South Florida on Saturday night.

Foster showcased his offensive potential against the Bulls, finishing with a double-double for the first time in his career. Foster’s 17 point, 12 rebound effort was highlighted by multiple three-pointers and scores off the lob.

“Jarrey is just such a good player,” SMU head coach Tim Jankovich said in the postgame press conference. “He’s a very good shooter. I love having him in the game and he makes me feel safe. I think he’s a total winner.”

Despite the big scoring night, Foster was quick to give credit elsewhere.

“I really want to credit the coaching staff,” Foster said postgame. “During Christmas break, we’ve been doing a lot of two-a-days and having shooting practices before our real practices. I feel like that has really helped me and the rest of the players out offensively. We’re just getting up a lot more shots we wouldn’t have got up if we didn’t have those extra practices.”

Foster said he thinks this was his best game at SMU and that finding confidence in his shot is helping him become a better player.

“I take pride in doing everything the right way,” Foster said. “The game will come to me, I never try to force anything, because I know that if we all play the right way, everyone will have a good game.”

It just so happens that every Mustang did have a good game. SMU shot 55 percent from the field and 50 percent from deep while taking more than half of its shots from three-point range.

“We never say, ‘let’s try to shoot X number of threes in a game,'” Jankovich said. “But we do definitely say when we’re open from three, we’re going to let it go. I love it when we’re shooting with this much confidence, I had a lot of fun.”

Four Mustangs scored in double figures, all of whom shot 50 percent or greater from deep, Foster included.

Forward Semi Ojeleye finished with a team high 21 points, eight rebounds and three assists. It was both his 6th game scoring more than 20 points and 16th double-digit scoring performance of the season. Ojeleye put together a highlight reel of his own, including this thunderous one-handed dunk that the big man could not help smiling for.

Senior guard Sterling Brown had scored only three points by halftime, but exploded in the second half, finishing with 19 points, five rebounds and five assists. Brown was hot from deep after halftime, hitting four straight three-pointers in the half.

Guard Ben Emelogu also had a great shooting night off the bench for SMU, finishing with a career high 11 points.

“Ben’s been playing very well in a lot of games,” Jankovich said. “I hope he builds on this, it’s only going to make us better. I was really happy for him.”

Like Foster, Emelogu is more concerned with making his teammates better than his own individual performance.

This Mustangs squad, like in past years, is showing that selfishness has no place at SMU. The players do not care about individual numbers or who is the star of the night.

“We just care about the W in the column after the game,” Emelogu said.