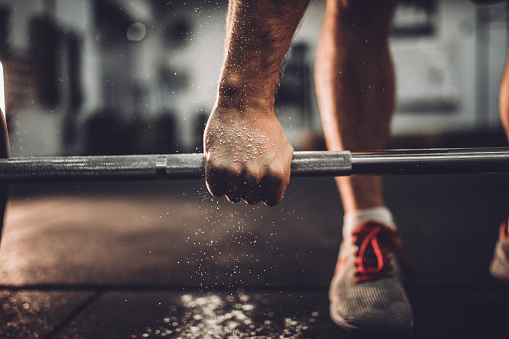 Brandon Huang recorded a score of 268 at the competition which was dubbed “Students vs Faculty Powerlifting Competition,” after he recorded a bench press of 285 pounds and a deadlift of 445 pounds. Huang Himself weighs 158.4 pounds.

Huang said his motivation for becoming strong comes from the idea of self-improvement.

“I just hope to be the best I can be,” Huang said.

The powerlifters participated in three rounds each of bench press and deadlift, with scoring following USA Powerlifting standards. It was very obvious from the start, though, that this was not a cutthroat competition to see who was strongest. It was about a community coming together to encourage each other to reach new heights, or weight, in their shared passion.

“I think there’s more of a community around powerlifting than just see who’s strongest,” said Jonathan Mitchell, president of Mustang Powerlifting. “You want to come out and watch your friends and see what they can do and get excited for them.”

Many of the powerlifters began lifting in high school, either as part of training for their sport or wanting to do something to keep them athletic.

“For me, powerlifting was the perfect combination of being able to go in the gym, but also get the kind of competitive spirit of playing in a sport,” said Bradley Gibson, treasurer of Mustang Powerlifting. “A lot of people play high school sports, and you graduate and never do it again. So, this seemed like a good replacement.”

The welcoming and supportive energy also boosts motivation and morale.

“The people you’re directly competing against want the best for you, they want you to lift the most,” Huang said. “Everyone pushes each other to be the best.”