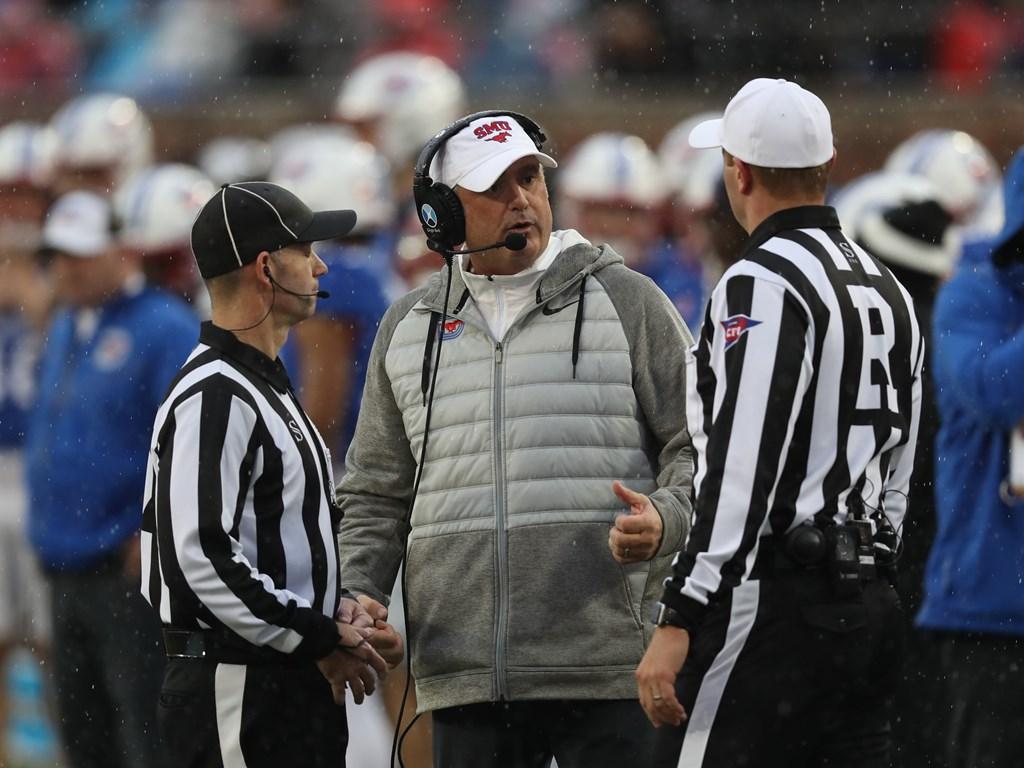 UNIVERSITY PARK — The line outside Chipper Haynes’ tent formed around noon, and didn’t dissipate until he ran out of inventory.

Haynes, as he has done every gameday for the last 20 years, was selling his red, “TCU Sucks” T-Shirts outside of Gerald J. Ford Stadium. Sometimes, he says, the shirts sell simply because TCU is SMU’s biggest rival.

But on Saturday, after news broke that SMU head coach Sonny Dykes would leave for TCU, Haynes expected to sell out.

“Are those anti-Sonny Dykes shirts?” one fan said as they walked up to Haynes. “Give me two.”

Haynes laughed, smiled and said, “See, might be our best-selling day. He shouldn’t have gone out like that.”

These are being sold outside of Ford Stadium.

Chipper Haynes said he has been selling these for 20 years, but today might be his best-selling day.

A customer came up to him and said, “the anti-Sonny Dykes shirt. I’ll get two.” pic.twitter.com/CtiV9BVIK2

And so began Dykes’ last day at SMU. A coach who for the better part of four years was built up by the program to be its leader, left Dallas heckled by fans who were confused and questioned by players who were hurt.

The root of their pain: Not only did Dykes go to TCU, but he spent the last month being less than forthcoming about his plans as SMU floundered its 7-0 start.

A 34-31 loss to Tulsa in a game where SMU saw a 17-0 lead slowly dissipate, accented that pain. SMU has lost four of five games since Dykes’ name has been linked to other jobs, a losing streak last duplicated in SMU’s history in 2017, when former head coach Chad Morris left for Arkansas.

“I hate the way it ended,” Dykes said, after thanking SMUs administration for the last four years. “I hate the way the whole season ended. I love those guys, always will.”

It was a surreal day as Dykes went through what will inevitably be his final game at Ford Stadium as SMU’s head coach. It was a day he nearly entirely manufactured himself. He evaded questions as reports of his departure circled. He declined to comment. He did not tell his team, even as the rumors stacked up to the point where the writing was on the wall.

Even down to the final minute on Saturday, after he gave a synopsis of his time at SMU, he continued to decline saying whether he would definitely leave for TCU.

“Yeah, we’re not talking about that right now,” Dykes said

The march to Saturday started in late October, as the Texas Tech job opened. Dykes at the time gave a starkly non-committal response about his interest in the job.

Days later, TCU opened up and Dykes again danced around the questions.

He didn’t address players in a team setting about the rumors. As SMU lost to Houston, and then to Memphis, Dykes maintained he didn’t need to do so.

Parents of players on the team admitted the rumors, and Dykes’ lack of communication, seeped into the team’s psyche as SMU fell off from inside the top 20 in the country to out of the American Athletic Conference race. Maybe it was not the reason the team lost, but it hurt.

“I understand it’s a business, but just wish there was more communication,” Jadarius Thursby’s parents, whose son is a freshman on the team, said.

As the losses piled up, and SMU dropped to 8-3, Dykes’ answers about the job oscillated. Two weeks ago he said he was “finalizing” a contract extension with SMU.

But a week later, in the final days of his tenure, it became evident that was far from true. Dykes’ non-answers caught up to him.

By Wednesday, six of SMU’s highest-rated recruits de-committed nearly all at once. By Friday, the news broke of Dykes’ departure while on the team bus, according to multiple parents and players. A scheduled team meeting forced Dykes to address it, but even then he did not commit to staying or leaving.

“It was hard to balance that out,” Senior Jimmy Phillips Jr. said. “You hear it everywhere. You see it on social media.”

All of that brought it to Saturday, where Dykes walked The Boulevard and coached a game that felt all but obsolete. SMU allowed 31-straight points at one point and allowed a five-win Tulsa team to become bowl eligible. SMU dropped another game, ending a regular season that hasn’t been on track since Dykes’ name was mentioned for other jobs.

Fans throughout the day made it known about their displeasure. They compared him to Judas. They questioned his legacy at SMU.

The SMU student section brought a sign that reads, “Thanks for nothing Judas.” It lists Sonny Dykes and Ra’Shaad Samples under it.

An official asked the fans to remove the sign when it was draped over the wall. So now it is prominently displayed on the lawn. pic.twitter.com/HA23AG0uzX

“He will be known as the man who left. Nothing more. Just like Chad Morris,” one fan said.

Whether that is shortsighted remains to be seen. What is known is Dykes went 30-18 as SMU’s coach. He brought the program to be nationally ranked each of the last three years. He won games at a clip not seen since The Death Penalty and, briefly, brought in recruiting classes that rivaled Big Ten power Michigan State.

“It’s been a really remarkable four years,” Dykes said. “I couldn’t be more proud of what we’ve accomplished on and off the field. We’ve got some really special players in this program. Obviously, a lot of success on the field.”

But this will also be a part of Dykes’ legacy, the way he left.

As he was walking down The Boulevard before the game, with fans chanting about TCU, Dykes exited early before the end of the road.

One fan shouted, “Taking the shortcut!”

For the way Dykes left the program, not talking as the season drifted away, it seemed to be a metaphor.

2 thoughts on “Heckled and hurt: Sonny Dykes bows out of SMU tenure with a loss to Tulsa”