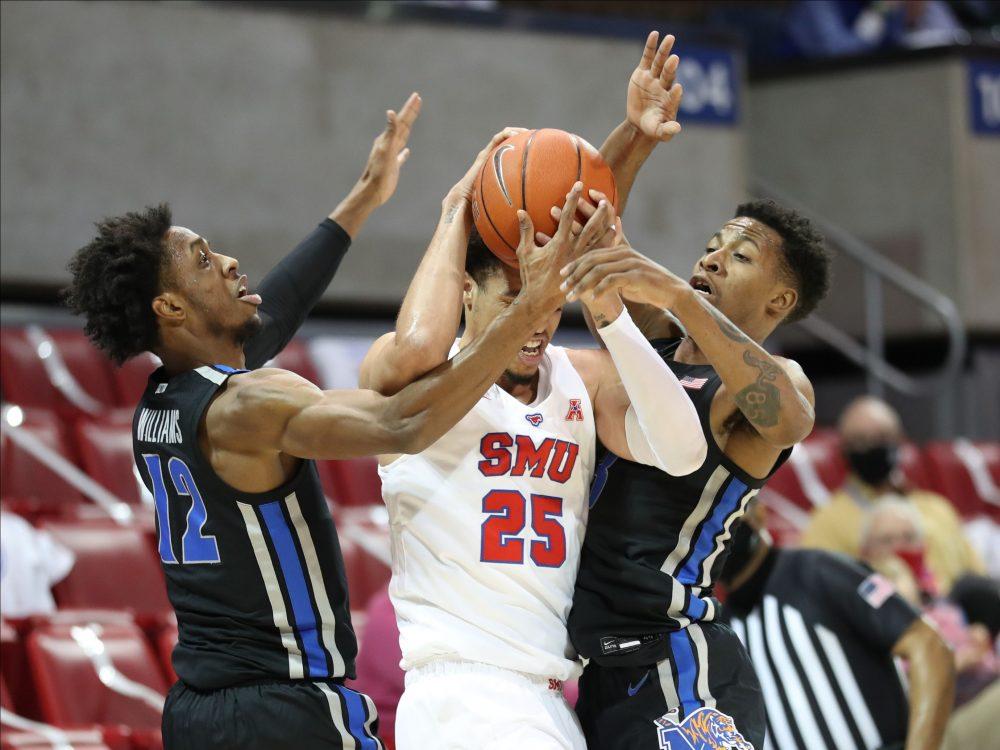 HOUSTON — The kick out pass was left wide open. Quentin Grimes had his best three-point look of the night, eyeing his second triple without a single SMU defender around.

And when the Houston guard found the bottom of the net, he turned to his own bench and let out a smile, obliging his teammates’ wishes to envelop him in a slew of chest bumps.

SMU was forced to call timeout on the next play. Houston, up 37-24, had broken a five-point game in a double-digit affair. The game would never become closer. Ultimately, it led to No. 6 Houston downing SMU 70-48 on the road.

“They kept coming and kept coming and we didn’t match that intensity, which I wish we would have because I think we could have hung in there, and I think a few shots would have eventually fallen,” co-head coach Yaphett King said after the contest.

This was a game that SMU was never supposed to win, but felt like the team’s last opportunity to pick up a quality victory before March. At the very least, it was the final chance for SMU to show it could at least compete with a nationally thought of team.

Houston, at 14-1, came looking to make its case for a No. 1 seed in not just the conference, but the country. SMU was in a position to make its stamp as a team deserving to be firmly on the bubble. But that did not occur in a 22-point loss.

For a while it looked as though SMU might keep it at least competitive. SMU kept the Cougars within arm’s reach for most of the first 20 minutes of the game, never trailing by more than five points. On two occasions, SMU slogged through poor shooting to take the lead.

But that, against this version of Houston, could only last so long. Marcus Sasser, Houston’s nationally ranked point guard, thrashed SMU with 19 points and four triples, three coming in the second half.

SMU, when the Houston offense found its form, simply did not have an answer offensively. It shot 15-47 from the field and an equally difficult 14% from three. Compounding issues was the rebounding margin, which was 28-11 in favor of Houston from the intermission on.

“It was stressed to us that Houston gets a lot of points off of second chances,” Feron Hunt said. “The game changed when they got a lot of 50-50 balls.”

If this was a game where SMU could have made its mark for a resume builder, it did the opposite. SMU carried its struggles offensively from the last three games into this Sunday. Playing four games in eight days, it looked tired.

Emmanuel Bandoumel and Kendric Davis continued their week-long struggle. Bandoumel finished 0-6 from the floor and 0-4 from three. He now is 1-10 from three in the last two games. Today, in 28 minutes, he only found a single point at the free throw line.

As for Davis, he looked like he could break out of his struggle early with two threes in the first half. But he finished 2-9 from the floor and nearly fouled out. He picked up four fouls with 12 minutes left in the game. Right on cue, a 10-point deficit ballooned into a 20-point affair.

His flagrant one foul early in the second half, which led to the free throws that allowed Houston to go up by double digits for the first time, was the dagger of the game.

“I don’t think him having three bad games — it’s not his fault at all,” Hunt said. “I don’t think every player can play their game every game. Even Michael Jordan didn’t do it, so I don’t expect him to do it. He’ll bounce back.”

When Davis came out for the final time in the last minute of the game, King hugged him.

Head coach Tim Jankovich remained out for his fourth-straight game after contracting COVID-19. Jay Duncan also did not travel with the team.

“He is battling,” King said. “He is following all the rules laid out by the American Conference and SMU to try to get back with the team.”

But with or without Jankovich, this was a blow. SMU has only winnable games left, according to Kenpom, but will still need to be nearly perfect down the strech to make it March.

Before all of that, though, it will need to make right the ship of its four best guards. Davis and Bandoumel are obviously struggling, but the bench has too. Tyson Jolly went 2-7 from the field in 31 minutes. Charles Smith IV went 0-1 and Darius McNeill did not play for the second-straight game.

“If it were me I would get some rest and get off my feet,” King said of the grueling week SMU had. “It is time to work smarter and not harder.