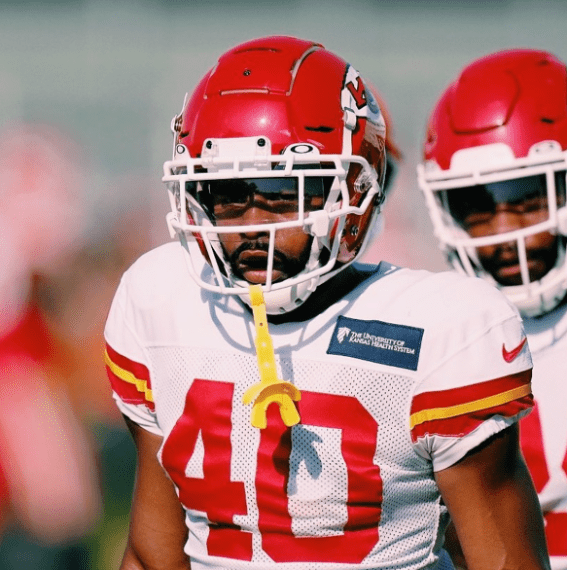 Rodney Clemons is driving home from the barbershop with his girlfriend in Kansas City. They’ve been living there together for a few months now and it’s finally starting to feel like home.

Kansas City is the farthest he’s ever been from his parents, who lived about four hours from his apartment near SMU’s campus. They helped their only son move into his new place in September. The star safety at SMU is wearing his NFL Players Association ball cap and practiced earlier that morning, as he continues preparing for his first NFL regular season.

At practice, Clemons is alongside NFL stars that he grew up watching, which is a dream come true. Pros that he played as on Madden NFL are now his teammates. Once the initial shock of meeting these legends fades, however, it’s time for Clemons to get to work to prove why he deserves to be one of the 53 men on the Kansas City Chiefs roster.

“I’m here to get a job, so you put the work in,” said Clemons “I’ve been given a great opportunity to learn from some great players and I’m just making the most out of it.”

At SMU, Clemons stood out among his teammates not only for his play on the field but also his leadership in the locker room.

“As he got better and had success, he never withered and was still the same guy,” said Trey Haverty, Clemons’s safeties coach at SMU. “When you’re dealing with 18-to-22-year-old young men, you respect guys like him because others follow him.”

Haverty came to SMU during Clemons’s junior year. The two met when former SMU head coach Chad Morris left SMU and took a large majority of his coaching staff with him. Haverty said that many players would have been unwelcoming and skeptical of a new coaching staff late in their college careers, but not Clemons.

“He was one of the catalysts who said, ‘Coach, whatever you need we’re here.’ The day we got here, it was open arms and ever since then, he worked his tail off,” Haverty said.

Haverty’s anecdote about Clemons is not out of the ordinary. His driven, mature character has been prevalent throughout his life.

Growing up in Katy, he was very close with his parents. Clemons and his father, Rodney Clemons Sr., always had a strong bond, especially when it came to football. Clemons said that the pair would always watch sports together. His dad is also the reason he got into football.

Clemons’ dad went to almost all of his football games starting with flag football at age four. Even while attending SMU, his parents made the four-hour drive from Katy for all of his home games.

“I knew if I went to [a different school] they wouldn’t be able to catch all my games. So, I decided to go to SMU to kind of stay home near family,” said Clemons.

This close-knit bond and support for Clemons continued during the past six months, while he was going through the NFL Draft process. In January, Clemons and former SMU wide receiver James Proche were invited to the NFL Combine. This is an exclusive ticket that only the top players from each rookie class receive.

The NFL Combine did not go exactly how Clemons had planned. He did not perform the way he wanted to, but his parents were there to pick him up along the way.

“He didn’t do so well at the combine and so knowing that and knowing him, it really affected him,” his father said. “It’s been a lot of ups and downs.”

In April, Clemons did not get drafted. After the 2020 NFL Draft ended, however, he received calls from multiple teams, inviting him to sign as an undrafted free agent.

After weighing his options, which included the Baltimore Ravens, Los Angeles Rams, and others, Clemons decided to sign with the defending Super Bowl Champion Kansas City Chiefs.

“Me and my agent felt like the Chiefs was the best option for me since they needed a safety,” said Clemons. “It’s a good team, so it’s not a bad situation to be in at all.”

Since coming to Kansas City, he has seen first-hand just how cutthroat the NFL can be. Competing with the top players for a limited number of spots is difficult, but Clemons has always been a fierce competitor.

“My aunt actually bought him a shirt that said, ‘If I can’t win, I don’t want to play.’ And that was pretty much him as a little kid,” said the elder Clemons.

His competitiveness tied with his work ethic has been what makes him succeed. His father said that Clemons has been an underdog throughout his life but has always risen to the challenge and exceeded expectations.

“It’s been amazing watching him go from level to level and at each level saying, ‘wow, he’s good he may be able to make it to the next level,” said Clemons’ father. “From flag football all the way to the NFL, it’s been totally amazing.”