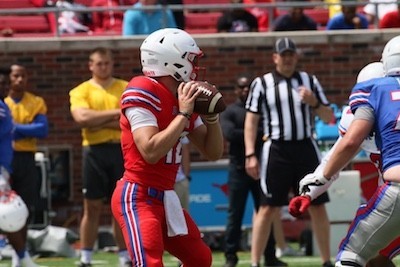 Asked to name the biggest difference between his old offense and his current offense, Rafe Peavey needed only two words: “We throw.”

SMU is by no means a pass-happy team, but the Mustangs’ offense looks like the Air Raid when compared to Arkansas’ pro-style, ground-based attack. The Razorbacks ran the ball 336 more times than they passed it in Peavey’s two years there.

The paces of the two offenses are opposite as well. Arkansas takes its time in the huddle and at the line pre-snap. SMU ideally wants to run at least 80 plays per game.

“Here, everything is tempo,” Peavey said. “We’re running a play and then we’re looking for the next play sometimes as the guy is getting tackled. Everything’s fast-paced.”

“We try to play fast and think slow.”

Peavey is one of two SMU players who sat out last season after transferring from an SEC school. Both he and former LSU wide receiver Trey Quinn are eligible to play for SMU in the fall and have two seasons left. In Saturday’s spring game, each put forth strong performances. Peavey completed 16 of 18 passes for 173 yards and a touchdown, while Quinn hauled in four passes for 61 yards and a score.

Each came to SMU from a run-heavy SEC team in search of a more active passing game and a better shot at earning snaps. SMU offered them both. Their paths to SMU, though, have little in common.

Peavey entered Arkansas’ camp in Aug. 2016 with no plans to transfer. He wanted to finish his career at the college he committed to as a sophomore in high school. He attended football camps at Arkansas every summer since he was in fifth grade. Arkansas was about a three-hour drive from his home in Bolivar, Mo. a 10,000-person town about two hours south of Kansas City.

But as fall camp continued, Peavey fell behind two younger quarterbacks on the depth chart. They were competing for Arkansas’ backup job. Peavey did not play in a team scrimmage on Aug. 20. A day later, he told Arkansas head coach Bret Bielema after a Sunday night team meeting that he would transfer.

Peavey had one large obstacle: classes were starting at most universities the next day. He had about four hours to figure out his next destination. He and his father talked with about 15 different schools during that time, gauging their interest.

That night, while eating dinner at Chili’s with his girlfriend, Peavey’s phone lit up with an incoming call from a number he didn’t recognize. The caller was SMU offensive coordinator Joe Craddock. He paused his dinner date and chatted with Craddock for about 15 minutes. Craddock’s message was simple and direct. He told Peavey that SMU had three quarterbacks and wanted to get to five. He had already watched film that Peavey’s father sent him and liked what he saw. Peavey told him he was in.

“It really wasn’t in the back of my mind the entire time,” Peavey said. “It was a split-second decision. But I felt overwhelming peace about coming to SMU. It was the same feeling when I committed as a sophomore at Arkansas.”

Yet uncertainty surrounded the move. Peavey knew no player, coach or student at SMU. He had never been to SMU before. He still had to be accepted into the school. But he needed to get to his new school quickly. Two days after his call with Craddock, he packed up his two-door Chrysler Crossfire and started the five-hour drive to Dallas.

While on the drive, Peavey looked up the acceptance rate at SMU. He found it was slightly above 50 percent.

“There’s a 50-50 chance I could get down here and not get accepted into school,” Peavey recalled. “So it was a huge gamble, but I had faith that God wanted me here.”

Peavey signed his scholarship papers shortly after arriving in Dallas. By Friday of that week, he was attending classes at SMU and living in an apartment. Since SMU allows students to freely add and drop classes during the first week of the semester, he wasn’t even behind on coursework.

In three days, Peavey went from Arkansas student to fully-enrolled SMU student. He said the woman who assisted him with the transfer admission process had never seen the system move so quickly in her 20-plus years working at SMU.

“She said it was a miracle,” Peavey said.

Quinn’s process, however, was anything but hectic and risky. He had an entire spring to find his future home. He had a pre-existing relationship with SMU head coach Chad Morris and several assistants. He didn’t need an application process miracle.

The former four-star recruit from Lake Charles, La. came to LSU with plenty of hype. He set a national record for career receiving yards (6,566) at Lake Charles’ Barbe High School. He started seven games at LSU as a true freshman in 2014 and finished with 17 catches, tied for second on the team. In 2015, he started two games but finished with just five catches. His role diminished as his career continued. In Feb. 2016, he met with the LSU coaches to talk about his future. Earlier that month, LSU signed three freshman receivers who were all at least 6’3”.

“At the end of the day, they almost agreed with me that they’re not looking for a 5’11” guy,” Quinn told DatBoot.com last summer. “I’m not the prototypical receiver that they’re looking for.”

Quinn said he left LSU on good terms. His picking SMU was not a question of whether he would come to SMU, but rather when he would announce it. The Mustangs were early favorites for one reason: Quinn’s relationship with Chad Morris. Morris recruited Quinn when he was the offensive coordinator at Clemson. Morris formed a strong relationship with Quinn and his family on two visits to Clemson, but it wasn’t quite enough to secure his signature. He picked LSU over Clemson right before his senior year of high school.

Once Quinn became available as a transfer two years later, Morris and staff pounced. Quinn was receptive. He liked SMU’s fast-paced offense that threw the ball more than LSU’s run-heavy attack. More importantly, he visited SMU for a spring scrimmage and found Morris preaching the same message that he did at Clemson.

“They do a really good job with the family atmosphere,” Quinn said. “We’re one big extended family, from the defense to the offense to the coaches.”

That made his decision not much of a decision.

“Before I got my release, I pretty much knew where I wanted to go,” Quinn said. “Wherever coach Morris was, odds were high that I was going to end up where he was at.”

The family atmosphere stood out to Peavey from the start as well.

“A lot of places preach that, but they don’t really live it,” Peavey said. “Here, look around, all the coaches’ families are here. It starts from the top with coach Morris. Chandler (Morris’ son) is always out at practice. So it Mrs. Paula (Morris’ wife).”

Naturally, Quinn and Peavey became close during their redshirt year last fall. Forced to sit out, the two bonded as they found ways to distract themselves from their temporary banishment from games. Each, in a way, was the other’s remedy.

“If he wasn’t here, that would have been miserable,” Peavey said. “Sitting out, it’s not a whole lot of fun.”

Quinn and Peavey threw together regularly after practice last fall. They called it “overtime.” They established their goal of a New Year’s Six bowl in 2017 and broke the task down into steps to reach it. Not wanting to focus solely on the end goal, they figured out how best to start on it.

“We try to reverse engineer that and start from the back, thinking of how we’re going to get there,” Peavey said.

NCAA rules prevented the pair from traveling with the team for road games, so they drove together to SMU’s contests at North Texas and Baylor.

Peavey and Quinn were not handed starting roles simply because they came from the SEC. Peavey is competing with Ben Hicks to be the starting quarterback. The pair split snaps evenly in the spring, but Morris said after the spring game that Hicks holds a slight edge. The battle will expand to three quarterbacks in fall camp, when Wisconsin quarterback D.J. Gillins is cleared for full participation. He suffered an ACL injury last fall while at a junior college.

“Once he picked up on the offense, it was just a matter of playing fast,” Craddock said of Peavey. “He’s done a heck of a job this spring, really coming on, learning the offense and playing at a fast pace.”

Quinn looks like a favorite to start, but SMU’s top receiver is Courtland Sutton. He spent the fall and spring working at both the receiver spots opposite Sutton. SMU likes its receivers to play multiple positions, which creates more options for personnel combinations. That’s one reason Quinn is oozing excitement about the receiving corps’ potential.

“We’re stacked,” Quinn said. “I’d like for any DBs to come up and challenge us.”