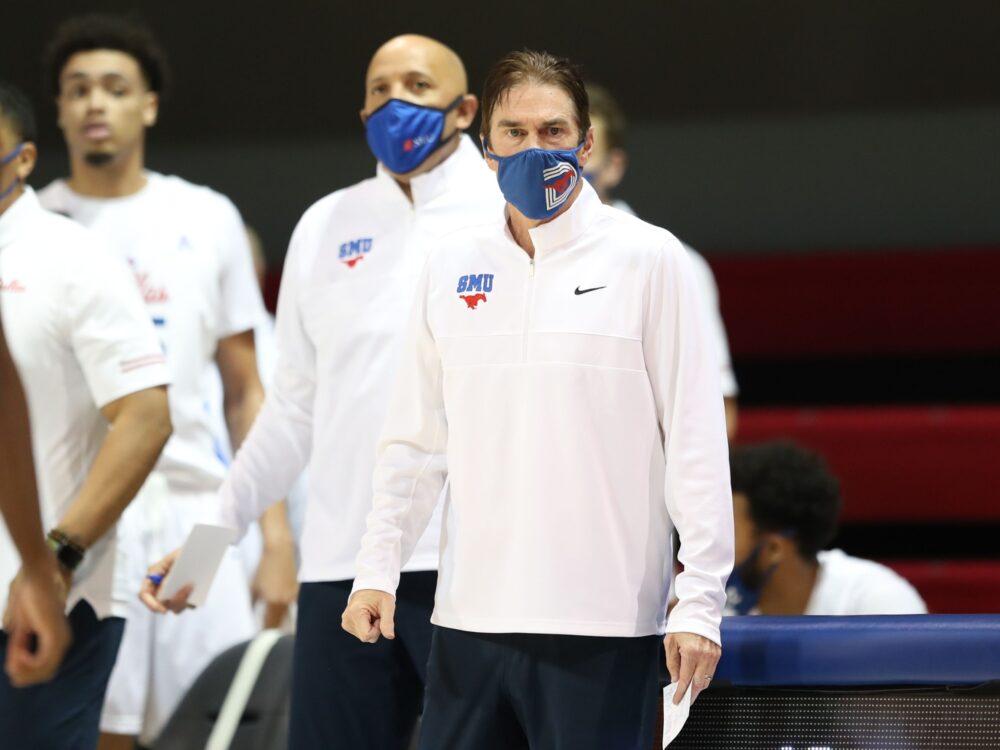 UNIVERSITY PARK, Texas — Tim Jankovich has had a tough week.

It started with a once-in-a-hundred-year snowstorm that paralyzed the city of Dallas.

That, in it of itself, was enough to set off a chain of events that had Jankovich simultaneously scrambling to find food for his players and getting a crash course in plumbing. Electricity went out, temperatures plummeted and games were postponed.

“You haven’t really lived until it all goes dark when the sun goes down,” Jankovich said on Monday, trying to make light of the rolling power outages that forced SMU to postpone its Wednesday game against Tulane.

And then, right when he thought he was out of the woods, the week ended with a visit from the other once-in-a-hundred-year event: the pandemic. SMU basketball shutdown again after recording positive COVID-19 cases. Four more games were wiped away — USF on Feb. 20, UCF on Feb. 23 and Wichita State on Feb. 25 and Feb. 28.

In sum, one week, five games, two unforeseen disasters that have forced the season to come to a grinding halt in February. All of it during what was supposed to be SMU’s stretch run to a potential NCAA tournament birth.

“I can’t comprehend it,” Jankovich said. “Hasn’t that been the story starting in the very beginning when our preseason schedule just got the legs knocked out from under it. Cancel, cancel, cancel, really that has been the big story of the season. For the whole country really, but we have been hit hard.”

If fact, SMU, by number of days missed, has been hit the hardest in the American Athletic Conference. No other team has had as many 10-day layoffs as SMU, with four.

This current stretch, of at least 25 days in between games, is good for the second-longest period of time off only to USF — which had 32 days off from January to February.

And Jankovich is the perfect embodiment of this trend. The team’s current shutdown, coupled with his own bout with COVID-19 that forced him to miss six games, has led Jankovich to have at least 52 days in between coaching a game. And 52 days is the minimum, only met if SMU is able to play on March 4 against Cincinnati.

“I can’t comprehend how many days this team has gone in between games all year long,” Jankovich said.

But what makes it tougher to swallow is that SMU, in the 15 games it has played this season, played itself onto the bubble.

At 11-4, and 7-4 in conference, these games against Wichita State represented its best chance to get a quality win on its resume heading into March. Sitting at No. 53 in Kenpom and No. 59 in the NET, SMU was just outside the tournament field.

Any win against the Shockers, a fellow bubble team with a lone quality win against Houston, could have been the nudge it needed into the field.

Instead, those games may never be played.

A win against Cincinnati, and presumably the regular-season finale against Tulsa, will likely not move the needle enough. A team that once thought it could make its case before the conference tournament — an event that is riddled with minefields with COVID-19 — now sees the tournament as its only recourse to get into the dance.

“It has been the story of our season. No more than right now. We are literally on the bubble. You know, a few wins and we are in the NCAA tournament. We need to be full strength and playing these games,” Jankovich said.

“But at the same time they don’t punish you for not playing since you can’t help it. We are just hoping that whenever we do get a chance to play, with whomever we have available to play, we can still find a way to win games,” he continued.

But right now there are more caveats than firm answers. SMU has been shut down for six days and does not know when it will come out.

Beyond that, the schedule that lies ahead is an unknown. SMU did not build in an open week to its schedule before the conference tournament to make up games that were postponed. Instead, it had two weeks off in December.

That may come back to burn SMU, as it simply does not have the time to make up many games before March 11 when the AAC tournament begins. Currently, SMU is scheduled to finish the regular season on March 7. Maybe it can reschedule one or two games, but rescheduling all five will be all but impossible.

Then there is also the uncertainty of the tournament itself. Unlike other conferences, like the MAAC and the Atlantic 10, the AAC only left four days before Selection Sunday to play a conference tournament. Any COVID-19 outbreak, presumably, could effectively derail the entire event and take out SMU’s chances of a win there.

So, for SMU, an uncomfortable present only leads into an uncertain future. A once promised sprint to March is now on hold. And who knows when, if, or how it will begin again.

“This was the week. These last few weeks, we were poised to put ourselves in position. And now we are not going to get them. I don’t know how many games we will get, or how many players we will have,” Jankovich finished.