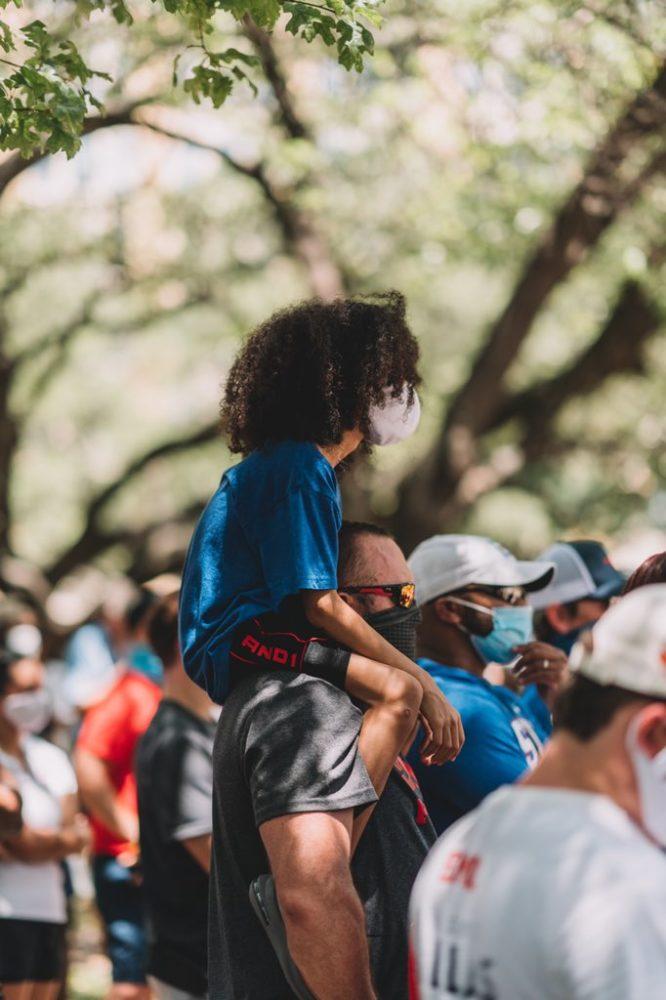 Standing with three water bottles in hand, cooling towel slung over his neck and donning a black shirt that featured a cascade of names starting with Emmett Till and ending with George Floyd, Scott Nady watched the sea of protesters file past him. He was people watching — a skill he had honed over years of going to protests like these.

Nady first hit the pavement in 1991 when Rodney King was beaten by police in Los Angeles. Similarly, the SMU special teams analyst marched when Trayvon Martin was shot and killed in 2012. But this, with the anthem “no justice, no peace” reverberating off the Dallas skyline, was different.

“It felt, looked and sounded different…,” Nady said. “At this point in my life, it is incredibly advantageous that I took the path to this spot, this moment. I think I can do a lot of help in this moment both with bridging the gap between two groups and helping empower people that feel powerless.”

Part of the reason Nady, a middle-aged white man, feels so at ease being at the forefront of SMU’s response to the death of George Floyd stems from his natural platform as a coach. He believes the program can make a difference. But the other, more personal side, of the equation is that Nady is raising two African American children, an 11-year-old son and 15-year-old daughter.

“My wife is African American… I immediately saw my son, as a grown man, in that video. That is a devastating image,” Nady said. “It terrified me.”

Nady now finds himself in a time when his home life and his work life are colliding onto one another. When he saw the video of George Floyd dying at the hands of police in Minneapolis, he admits he cried. He didn’t look at his phone at first, collecting his thoughts. When he did, the conversation amongst the team and the coaching staff had already begun.

But even as the emotional conversations took place via text and call, Nady’s first priority was his family. He showed the video to both his children. He says he never shields them from the realities of the world.

“Being in an interracial marriage is very interesting. We have been together a long time and had umpteenth stories of overt racism,” Nady said. “But if I get tired, I can just go to Home Depot by myself. My wife and kids don’t get the chance (to do that), nor would they ever want to.”

Yesterday the demonstration downtown was AGAIN, beautiful & inspiring & peaceful! Our staff was led by @CoachDykesSMU & had over 30 SMU football coaches & players present handing out hundreds of waters to demonstrators on a very hot day for 4 hours. Proud to be a Mustang! pic.twitter.com/y01aPJwGLH

At work, though, Nady must contend with another reality. Floyd not only could have been his son, but one of his players too.

In a Zoom call meeting with the entire team, SMU decided to have players draft a statement themselves. It was also encouraged for players and coaches to use their social media platforms to get the message out, something running backs coach Ra’Shaad Samples credited to head coach Sonny Dykes. The program became the first college team to join the Players Coalition, a group whose mission statement is to “end social injustice and racial inequality.”

“We want our players to have a voice and we also want them try to affect change,” Dykes said. “We felt (the Players Coalition) could provide us with resources, ideas to help direct our players’ action.”

The other tangible effort the team decided upon was attending protests. Nady, among others, led that charge. He first went out to protest with his family, so they could see everything when it was “raw and hot.” In the middle of the week he went with quarterback Shane Beuchele, linebacker Shaine Hailey and cornerback Chevin Calloway. He finished off the week by attending Saturday’s protest with nearly every coach and a handful of players.

Nady notes, however, that while his he is proud of the current response there is a certain “irony” to it all.

“I think it is a cruel irony that these boys often play in stadiums all around the country that cheer them as demigods in the moment. But as soon as the gear comes off, helmet comes off and they are back in society, they treat them in a way no one would want to be treated,” Nady said. “Our boys deserve a voice. They deserve to be appreciated, recognized, applauded off the field the same way they are on the field. If you just look at our African American players, I could tell you things that would blow your mind.”

1/3 As a coach I have a responsibility to equip and inspire!
Leadership is not circumstantial or convenient.I have a platform & I must use it!#BlackLivesMatter is not a movement saying that black lives are more important than any other race. It is a movement bringing awareness pic.twitter.com/N7EqoDaZkS

Nady sees his current platform with SMU as a chance to share his perspective that has been formulated over backyard barbecues in Dallas, football practices at Cal Berkeley, and listening to his own family and players. He said he nearly cried when one player on the team’s Zoom meeting said he just wanted his teammates to make sure nobody “talked bad about him” when he wasn’t around.

“That is as basic as starving man asking for a glass of water,” Nady said.

Whenever memory he recalls, Nady believes his efforts are motivated by his players and his children. He doesn’t pretend to predict the future. He wants to contribute to it though.

“Whether or not we change is substantively in my lifetime, I don’t know. It doesn’t change my effort,” Nady said. “My son’s life, my daughter’s life and the lives of their children are worth my consistent, constant effort.”

“You are growing into consciousness, and my wish for you is that you feel no need to constrict yourself to make other people comfortable.” Ta-Nehisi Coates pic.twitter.com/O7e8Ss7EwH

Nady said he rarely rests since it all happened. He made phone calls to his friends on a drive to Bishop Heart, where he was picking up food from a black-owned vegan restaurant, urging them to download an app that tells people where African American restaurateurs are. He likes doing the little things and relishes his new role in the program. But, he says, players are first. And he likes the prospects of what they can do.

“Our players are a big part of this community. Are we going to change the landscape of Chicago, Tampa or Brooklyn? Nope. But I will be damned if we can’t make a massive impact on Dallas, Texas,” Nady said.