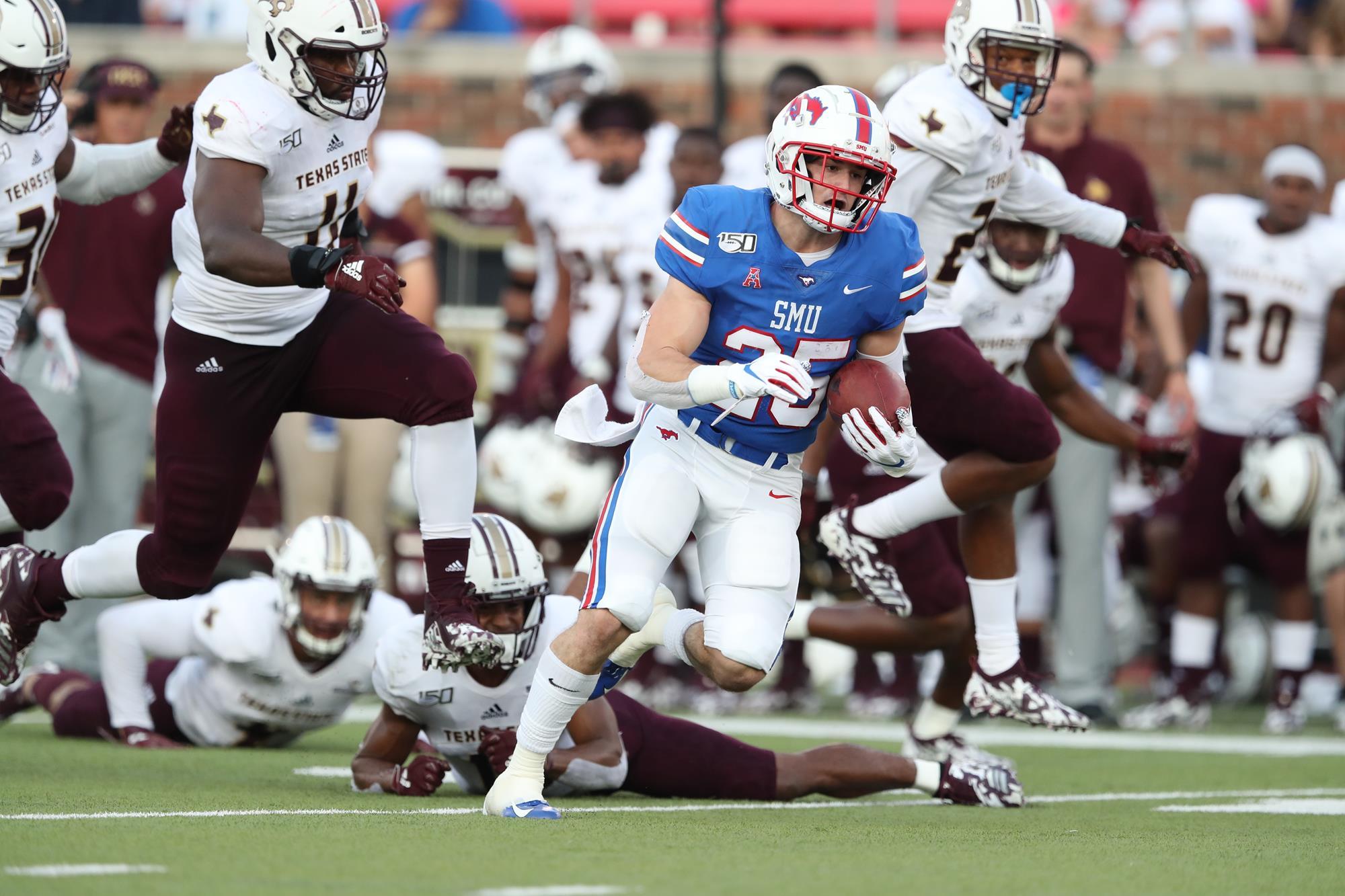 Lying on the turf of Gerald J. Ford Stadium, T.J. McDaniel saw his foot pointed in the wrong direction.

SMU’s starting running back had just fractured his fibula and dislocated his ankle on the first play of the Oct. 3 game against Memphis. He ripped the foot back into place before the medical team came out, trying to release the pressure built up in his leg.

By the time he was being carted off the field, McDaniel heard doctors talk about surgery. It is the standard protocol for a severe injury like this. And, for several days, he was resigned to that reality.

“People obviously look down at an injury like mine and think surgery,” McDaniel said.

But in the days after, McDaniel went all in on an alternative recovery path, at the urging of his brother. It was a decision that would ultimately change the direction of his collegiate football career. Instead of surgery, McDaniel decided to use an electrical machine made by his brother’s company to heal his injury. The device, normally used to stimulate muscles, was untested on severe injuries such as broken bones, and his brother had no medical background.

Surgery would have entailed a standard recovery of four to six months, followed by a return to football. Now, more than a year later, McDaniel remains sidelined and may never play football again.

Ultimately, SMU head coach Sonny Dykes signed off on the decision by McDaniel to forgo surgery and follow an alternative path. Dykes said that he supported McDaniel’s medical choice, even though the treatment was unproven, and that the athlete and his family told him the decision not to have surgery was made in part because of religious reasons.

Dykes, though, said he was fully aware that medical professionals would call for surgery with the sort of relatively ordinary injury that McDaniel sustained.

“It is an injury that is pretty common,” Dykes said. “There is a normal, kind of regular, way to deal with it that is surgical. There is a body of work that I think people are comfortable with, most doctors.”

However, Dykes added, “everyone has the right to choose how they want to have their medical stuff done. He is in charge of his body and can do whatever he wants.”

McDaniel, then a sophomore, said he made his decision not to have surgery despite meeting with SMU team doctors and orthopedic surgeons, all of whom recommended surgery and were skeptical of the alternative path the athlete proposed. Still, McDaniel says he did not have to sign a medical waiver from the school, and SMU has kept him on scholarship.

The decision to forgo surgery was made in part because of his trust in his brother and his belief that the electrical device would aid in his full recovery, McDaniel said.

“The human body just knows the human body. It’s scientifically proven,” he said. “That’s the whole reason why, whenever you have an open wound, it scabs over, and you have that brand new layer of skin. Your body knows that scar isn’t supposed to be there. It’s no different with, with my foot. That’s kind of what I trusted.”

Today, there is no timeline for McDaniel’s return. McDaniel’s recovery is currently at the point where he can walk and run. However, he has not been cleared for any impact training, a pivotal step for any eventual return to football.

McDaniel’s calculus changed quickly in the days after his injury. Cam McDaniel, McDaniel’s brother, who had been a philosophy major on a football scholarship at Notre Dame, drove to McDaniel’s Southlake home on the Monday after the injury to propose a non-surgical option that amounted to an unheralded medical practice.

Cam McDaniel, who’s also the CEO and co-founder of a company called Atom Technologies, suggested McDaniel use his company’s “Atom Machine” to facilitate the healing process. It would pulse electrons through his lower leg for 15 to 18 hours a day.

After consulting with his family, McDaniel met alone with Dykes to explain his recovery plan.

“Nothing was 100 percent. And I told them that. I said, ‘Look I have no clue if this is going to work,’” McDaniel said. “A lot of doctors were very confused on what I was doing. A lot of doctors told me I probably wasn’t making the best decision. It brings a lot of a lot of doubt to the decision that you’re making. I chose to go the natural route.

Dykes said he was supportive.

“Doctors suggested surgery and he wasn’t comfortable with that,” Dykes said. “I don’t know if it is any different than a doctor says, ‘Here, take this.’ And you say, ‘Well I’m not sure if I’m really comfortable taking that.’”

Dykes also noted that he talked on the phone with McDaniel’s father. A sticking point, according to Dykes, was that McDaniel did not want to have metal in his body. Metal is often in the screws used to heal a severe break of the bone.

“I was told that he didn’t want metaline in his body for religious purposes,” Dykes said.

After Notre Dame, Cam McDaniel went on to play in the Canadian Football League where, in 2017, he injured his groin in preseason training camp. During the process of recovery, he met Mike Montoya, a self-proclaimed “neurotherapy expert.”

Montoya led him through a series of electrical-based therapies. According to Cam McDaniel, an injury that should have taken four-to-six weeks to recover from took him 10 days.

Throughout the 2017 season, McDaniel became engrossed with Montoya’s theory that “all disease in the body amounts to a lack of correct electrical flow.” Montoya is not a doctor. He was a global studies major at Wilfrid Laurier, a Canadian university.

When McDaniel retired from football at the end of that season, he and Montoya started Atom Technologies. They created the “Atom Machine” that falls in line with the FDA classification “Class Two muscle stimulator”.

The FDA says these machines should be used on a “prescription” basis to treat, “muscle re-education, relaxation of muscle spasms, increased range of motion, prevention of muscle atrophy, and for treating other medical conditions which usually result from a stroke, a serious injury, or major surgery.”

When T.J. McDaniel got hurt, Cam McDaniel and his business partners saw an opportunity to expand the machine’s function and prove it could work to heal a bone and ankle. It could also, they thought, get McDaniel healthy enough to play Division I college football.

They were aware that T.J.’s was not a soft-tissue muscle injury but maintain that the Atom Machine is “versatile” in its application. Cam McDaniel noted in an interview with The Daily Campus that some doctors were “considerate of the possibility” his approach could work.

He says combinations of electrons and sound waves have been used in the past to help bone development.

“We’ve grown up watching movies where these crazy medical-like technology things happen, you know in Hollywood or on TV or whatever,” Cam said. “And I always go back to Marvel. Marvel and Wakanda and the med-bed scenarios that they have. But what I’m saying is that is not as far off as most people might think.”

McDaniel believes this application on his brother is a testimony to what his company can do on a minimal budget.

T.J. McDaniel’s recovery has been monitored by his brother, Montoya, Steve Bodanis and Scot Prohaska. Prohaska is a biomechanics specialist in California who worked with a number of NFL draft prospects in the leadup to the 2021 NFL draft. Bodanis is a kinesiologist who works for a company called “AthleteX.” It lists Cam McDaniel as one of its testimonial athletes.

The recovery process never had a firm timeline, according to both McDaniel brothers. Originally, the plan was to test the machine for the first couple of months of T.J. McDaniel’s recovery and, if it didn’t work, the athlete might reconsider surgery. However, the National Library of Health notes the ideal timeline to have surgery is a week after injury.

“A delay of more than one week gives a significant rise in infectious wound complications, which significantly lowers functional outcome and patient satisfaction,” the organization says.

T.J. McDaniel spent the first several months sleeping with the Atom machine. He then began sitting in a tub of water with the current flowing through the tub. The FDA warns this practice can be unsafe and there is potential for “shocks, burns, bruising, skin irritation, pain.”

By April, nearly six months after the original injury, McDaniel flew to California to train with a couple of life-long trainers. He spent two months there but returned to Dallas and felt something “missing” in his recovery.

He adopted a regimen of jumping off an 18-inch box to train his ankle how to “absorb gravity.” McDaniel says it helped him cut while running without pain. McDaniel says SMU doctors agreed he could ease into running but continued to say he was not cleared for impact.

McDaniel remains confident that he will return to the field and he believes the natural route will have paid off.

Cam McDaniel says his brother’s recent MRI results show improvement. He believes his brother could be a “pioneer” in how athletes with severe injuries are treated.