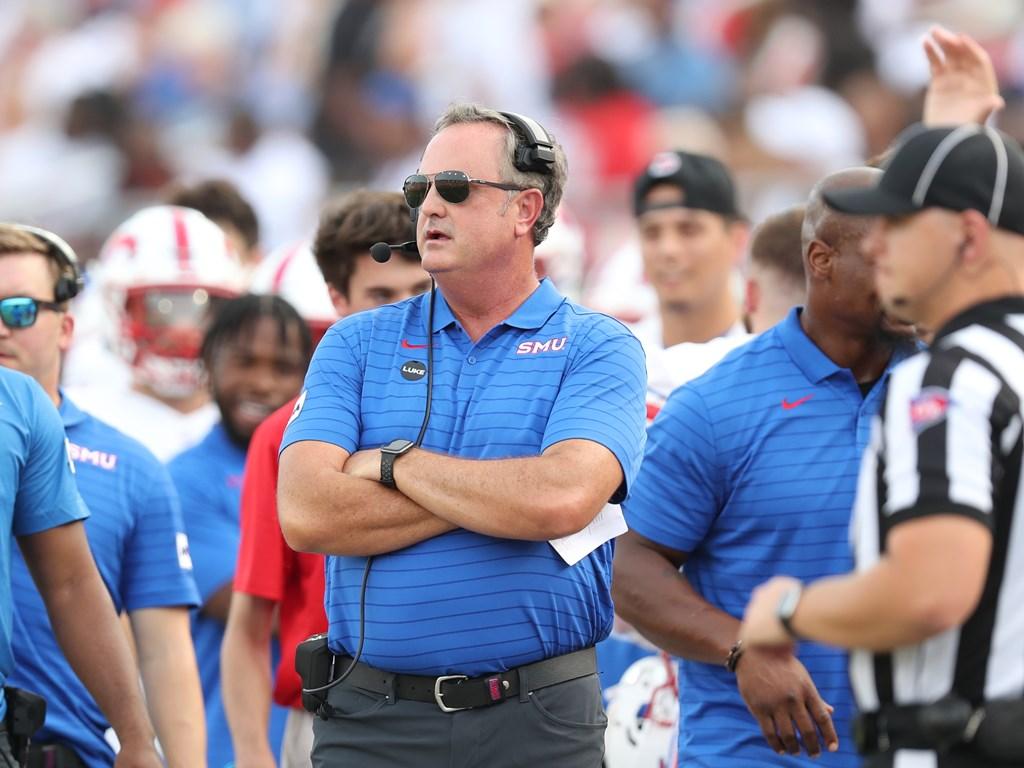 UNIVERSITY PARK, Texas — Sonny Dykes has been down this road before.

Multiple times, in fact, has SMU’s head football coach been involved in reports that have Dykes leaving for Power Five schools.

This week, reports have centered on Dykes’ candidacy for Texas Tech, a place where Dykes’ father coached and where Dykes himself worked for six years.

But even as the rumors of Dykes’ departure from SMU have become more commonplace, this latest linkage between Dykes and the Red Raiders is taking on a different feel than times past. He has more connections to this job.

He also, when asked about it on Tuesday, took a starkly different tone than the last time he talked about Tennessee.

“Look, we’re focused on getting ready for Houston, and I’m not ever going to talk about other jobs,” Dykes said at a media availability. “I just don’t think it’s fair to anybody. Look, our guys are excited to play, we’re focused to play, we know how big of a game this is for our program, and no one’s worried about anything other than playing well Saturday night.”

For reference, this is what Dykes said when talking about Tennessee in February.

“As a young coach, sometimes you chase jobs, and those logos are important to you and all that. And I’m way past that,” Dykes said. “I have a really unique situation here in terms of my family. We love it. Dallas is my home. Texas is my home.”

But Dykes’ more professional, standard response is to be expected. This Texas Tech job is much more plausible for Dykes to take than at Tennessee.

Texas Tech has made it clear it wants a coach with Texas connections. Dykes’ father, Spike Dykes, was the head coach in Lubbock for 13 seasons. He won four coach of the year honors from the conference and retired as the winnest coach in Texas Tech history.

Dykes then coached at Texas Tech from 2000-06, working his way from a wide receivers coach to the co-offensive coordinator.

Tech also had said it is targeting someone who can recruit in the Lubbock area. And although Lubbock is much different than Dallas, Dykes’ track record of recruiting in Texas would make him as qualified as anyone to fulfill Texas Tech’s vision.

Since coming to SMU, Dykes’ has brought in multiple recruiting classes that have been considered by 247Sports, a recruiting database, among the best in Texas.

More importantly, Dykes has commandeered the transfer portal to bring in over 20 starters in the last three years, amassing a 24-6 record in that time frame. Notably, Shane Buechele and Tanner Mordecai have both been transfers from Big 12 schools.

There will be other candidates that also make sense to fulfill Tech’s priorities. Jeff Traylor, the head coach at the University of Texas at San Antonio, has also been mentioned as an option.

Traylor has UTSA ranked in the Top 25 and 8-0. He is from Texas, coached at Texas and SMU, and has proven he can recruit in a difficult Texas environment — a Conference USA school in San Antonio.

Regardless of the other options, though, Dykes will be a major figure in the race to fill Texas Tech’s job.

Dykes, in the past, has talked about finding the right fit when looking at Power Five offers.

This job, by far, is where Dykes has familiarity.

He also has relationships.

Time will tell what will happen with Dykes and Texas Tech. For now, he is focused on Houston.

One thought on “‘I’m not ever going to talk about other jobs’: Sonny Dykes takes starkly different tone in his response to Texas Tech job vacancy”