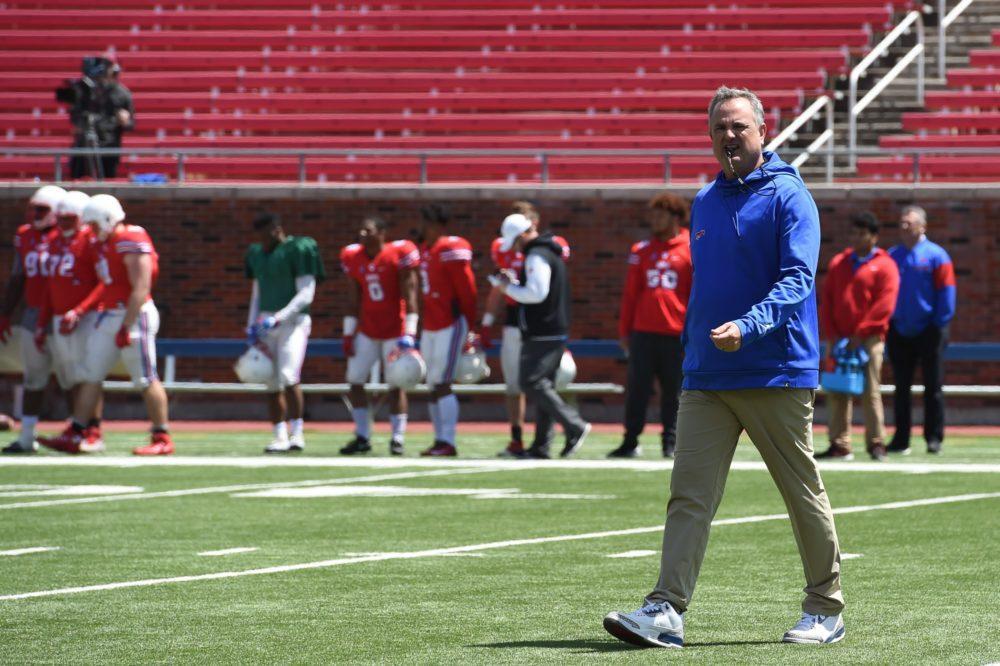 Sonny Dykes has never been in love with the transfer portal. But just leaving it at that would be a grave oversimplification. It is a far more complex relationship.

SMU’s third-year head coach has at times questioned the message the portal sends to student-athletes. As a college football lifer, the son of a college coach, it is predicable the transfer portal could at least strike some chord of discomfort for Dykes.

But there is also the reality that SMU has used the transfer portal more effectively, and more frequently, than almost any other college program over the last two seasons. Arguably Dykes’ greatest asset in leaping from five wins in his first campaign to 10 wins in year two was his program’s aggressive use of the portal.

Last season’s roster touted 31 transfers, most notably SMU’s all-conference quarterback Shane Buechele from Texas. On down the list, some of SMU’s most visible stars from a year ago came by way of another school. Reggie Roberson Jr. was a West Virginia product. Richard McBryde made the trip from Auburn.

“I don’t know necessarily that [the portal] is sending the right message to guys,” Dykes said last year. “But at the end of the day, you want players to have a good experience … If someone is some place and they’re not happy, I think they ought to go some place where they are happy.”

Dykes’ personal feelings about the portal may never fully square. Is it the necessary evil of 2020 college sports, or the undercurrent of positive change for student-athletes?

The good thing, at least for Dykes and SMU, is that neither one of them have to answer that question. And it looks like they won’t. Instead, both will simply continue to use college football’s newest innovation to fill roster needs.

Dykes indicated that as the 2020 season nears, at least for the time being, he expects to welcome several more transfers to his roster. While last season was about getting a volume of players in the program, this time around will be centered on filling out depth and holes.

“I’m excited about some transfers that we could get here in the next couple of weeks. They might be able to contribute to us [this year] as well,” Dykes said on Thursday afternoon.

SMU was widely praised for how it used the transfer portal in 2019 to overhaul a roster that was in upheaval when Dykes came on board. This season, the innovation for Dykes will be slightly different. It will instead have more to do with using the pandemic to his program’s advantage. With players looking to travel less, it will be a chance for local players to stay in Dallas.

“Keeping Dallas kids in Dallas will always be our priority. I think there is a shift [with kids wanting to do that]. I think we could see this even before COVID. I think they understand staying home creates a lot of opportunities to create a brand for themselves,” Dykes said.

“We want [them to see] you can get an education from a school like SMU and also have your friends and family come watch you play. We want to have enough credibly to say you don’t have to play in the SEC or Big 12. You can come to SMU and have the best of both worlds,” Dykes continued.

One of those players, a graduate transfer from Stanford, is Michael Williams. Williams fits the mold in just about every way for how SMU wants to attack the portal this year. He is a local player, an All Saints Episcopal graduate in high school — a school right outside of Dallas. He is also a needed defensive tackle, where SMU lost all three of its primary players at that position from a year ago.

Williams will be added to the fold with another defensive lineman Junior Aho, a transfer from New Mexico. The Stanford graduate admitted in an interview back in March that part of the attraction was coming to play at home, where he thinks his family watch party could be close to a 100 people strong.

“We will have some new faces that I think people will be excited about,” Dykes said.

The other positions that SMU is looking to add to this season are still up in the air. Dykes did not specify where else he sees a transfer coming in. The defensive side of the ball is where he hinted.

Regardless, it appears that 2020 will play out as another ruffle in SMU’s plan to use the transfer portal to shape the program. Ideally, Dykes said, SMU will not have to search the portal to reel back in local talent in the future. Instead, he would prefer high school players in Dallas to choose SMU the first time around.

But, with Dykes in his third recruiting cycle as head coach, that vision is still in progress. The 2021 recruiting class will be closer to the ideal form, with almost ten local players in the recruiting haul.

Until the day Dykes feels comfortable with SMU’s local stamp on Dallas, though, the Mustangs will be content with players finding their way back to their hometown anyway they can. Right now, that includes the portal even if Dykes’ doesn’t necessarily love it.