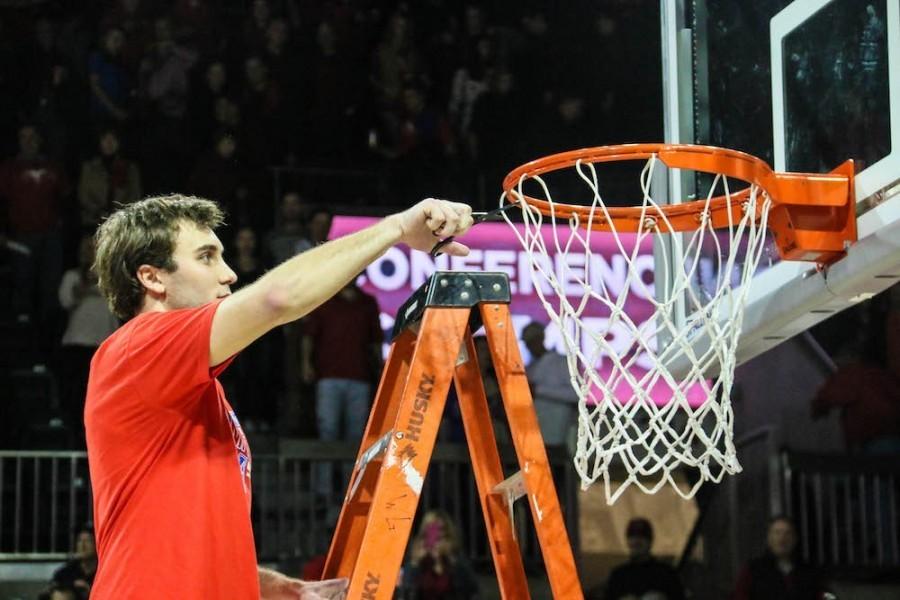 Beneath all the confetti that marked SMU’s second outright American Conference title in three seasons, and the 3-pointers and the dunks that helped clinch it Saturday, Tim Jankovich solved a problem.

Call it a senior day reward, but also gesture of trust that resolved an issue that had been eating at Jankovich for much of the season.

SMU’s head coach has told Wilfong to be ready for a game where he needs to play major minutes this year. With seven guys, SMU is an injury or ejection away from needing him. Prior to Thursday’s win vs. Tulsa, that scenario arose four times in conference games this year. In those four games, Wilfong played a grand total of one minute.

“He has deserved to play,” Jankovich said. “His tough thing is that he’s on such a good team. There are guys that are hard to take out of the game. Jonathan has worked his way up into a guy that can play legitimate minutes in Division I basketball.”

In those four games, SMU’s main rotation players were exactly that: too crucial for Jankovich to sub out. SMU won three of those games by single digits: a 65-60 win at UCF, a 60-51 win vs. Cincinnati and a comeback 80-75 win vs. Tulane. The fourth was a 66-50 win at Temple that SMU didn’t comfortably put away until the final three minutes.

“He showed up, day after day, and did it with almost no reward,” Jankovich said. “You can talk about all the positives and all the happy things this year, but the toughest thing for me has been him. You come home and think, ‘gosh, he’s just working so hard. He’s gotten so much better. He can play and help us. But I barely play him.”

A few times this season, Wilfong has played right at the end of the first half. But not for more than a minute, and in situations where Jankovich wants to rest his starters or keep them out of foul trouble.

This year is not the first acknowledgement of the matter. It came up after the game that gave Wilfong his most famous moment, 777 days prior to his final game at Moody. He put the exclamation point on SMU’s 77-54 win vs. East Carolina that day. He picked off a lazy pass at the top of the key, and scooted toward the hoop unobstructed. Then he rose up, and dunked it with one hand.

His first, and only, dunk to date at SMU, as a result of his first career steal.

He calmly ran back down the court to play out the final six seconds. The SMU bench and the crowd was anything but calm. Ben Moore and Sterling Brown leaped from their seats, onto the court, flashing mile-wide smiles. Nic Moore let out a yell as he almost fell to his knees. At the buzzer, his teammates ran the length of the floor and mobbed him.

“He’s better than people think. I need to start to realize that we might need to use him.”

That need didn’t arise, though. He played three games and six minutes the rest of the season.

He started one game in 2015-16, on the road in his hometown of Memphis. He played the first four minutes, recording one assist and one personal foul. He didn’t enter the game after the first TV timeout.

When the chance came Saturday, also vs. Memphis – not out of need, but out of trust – Wilfong proved trustworthy.

Wilfong made his first start at Moody, on Senior Day. He played the first five minutes of the game. The score when he came out of the game? SMU 17, Memphis 6. He dished out two assists in the first three minutes. One of them came on a dribble-drive, where he collapsed a defender with him for a couple steps after initially passing up an open 3, then passed back to an open Ben Moore along the baseline. Moore drilled a mid-range jumper.

He played 10 minutes in the second half, with Ben Emelogu sitting out to rest an ankle injury sustained Thursday. That’s when SMU fans got their favorite reason to cheer.

With 6:14 left in the game, Wilfong pulled up for a baseline jumper, and sank it. Three minutes later, he made a layup.

Sitting at a dais next to fellow seniors Ben Moore and Sterling Brown after the game, he admitted his appreciation for the crowd and its countless “We Want Wilfong” chants that echoed Moody in the last four years, usually when SMU is about to close out a blowout win.

“It’s nice to hear the roar,” Wilfong said, conference title trophy resting in front of him. “Sometimes you just want to get in the zone of a game, because everybody is yelling at me to shoot. But it’s nice to get that bucket and let them cheer. Then I can just play.”

His final stat line read four points and three assists, plus one starting lineup introduction. All are career highs.

“The fans know he puts in the work,” Brown said. “They want to see him do good out there. They’ve loved him since we were freshman.”

And even if the minutes didn’t always reflect it, so has the coaching staff.