As Jordan Wyatt sprinted into the end zone with 18 seconds left, the Mustang faithful could finally let out a sigh of relief. After a game full of squandered opportunities, SMU had locked up a win.

The sloppiness of the game could be epitomized in one play. On an SMU extra point attempt, the snap went through the hands of holder Sean Tuohy and came screaming towards midfield. A Liberty player kicked the ball out in front of him, towards the SMU end zone. Liberty picked the ball up and ran it for what would have been two points, but the play was called back for an illegal kick of a loose ball.

The Mustangs got off to a hot start in the first quarter, as running back Braeden West scorched the Liberty defense consecutive 26 and 23-yard runs to get SMU into the end zone. The Flames marched right back down the field on the next possession to score a touchdown to tie the score 7-7. SMU later picked up a pair of short field goals to take a 13-7 lead at halftime.

In the first half, quarterback Ben Hicks continued to struggle in the red zone, throwing two interceptions. He played a turnover-free second half and completed 19 of his 32 pass attempts for 209 yards, with no touchdowns and 2 interceptions. He would have had even more yards Cortland Sutton had he not dropped a deep ball that Hicks threw to him.

In the third quarter, SMU got a quick score on just their second offensive snap of the half as West shed a couple of tackles and broke out a nasty spin move en route to a 66 yard touchdown. West was productive and efficient throughout the game, totaling 220 yards and two touchdowns on 24 carries.

After starting Liberty quarterback Stephon Masha threw his third interception of the game, Liberty coach Turner Gill put in Calvert. Calvert took the Flames down the field for a touchdown on his first drive of the second half.

Liberty had one last chance to tie it up with 47 seconds left and no timeouts remaining. Jordan Wyatt intercepted Calvert and returned it for a touchdown.

SMU’s corners Wyatt and Horace Richardson combined for three picks. Wyatt let another interception slip through his hands as he jumped a slant route on fourth-and-two.

Cortland Sutton had a big first half, catching 3 balls for a 62 yards, including a 47 yard catch-and-run in that featured a filthy stiff arm.

Posted on September 17, 2016 by Daily Campus Contributor
ShareTweetShare on Google+Pin on PinterestSend with WhatsApp
12 recommended

After working out with Trevor Lawrence and Jordan Palmer, Buechele looks to capitalize on being unconventional prospect 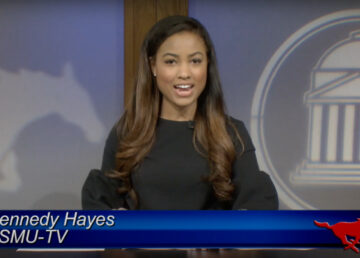 SMU-TV’s Jenny Rudolph and Kennedy Hayes anchor this Monday edition of The Daily Update. Kennedy updates us on the Johnson & Johnson vaccine and Jenny updates us on Derek Chauvin’s sentencing. SMU-TV’s Hannah Jones joins to tell us about this year’s Oscars. Al... END_OF_DOCUMENT_TOKEN_TO_BE_REPLACED

Feron Hunt signed with the Dallas Mavericks as an undrafted free agent on Friday night. END_OF_DOCUMENT_TOKEN_TO_BE_REPLACED

A rare super senior, Richard Moore’s seventh year of college football will play out as both a personal triumph and interesting case study