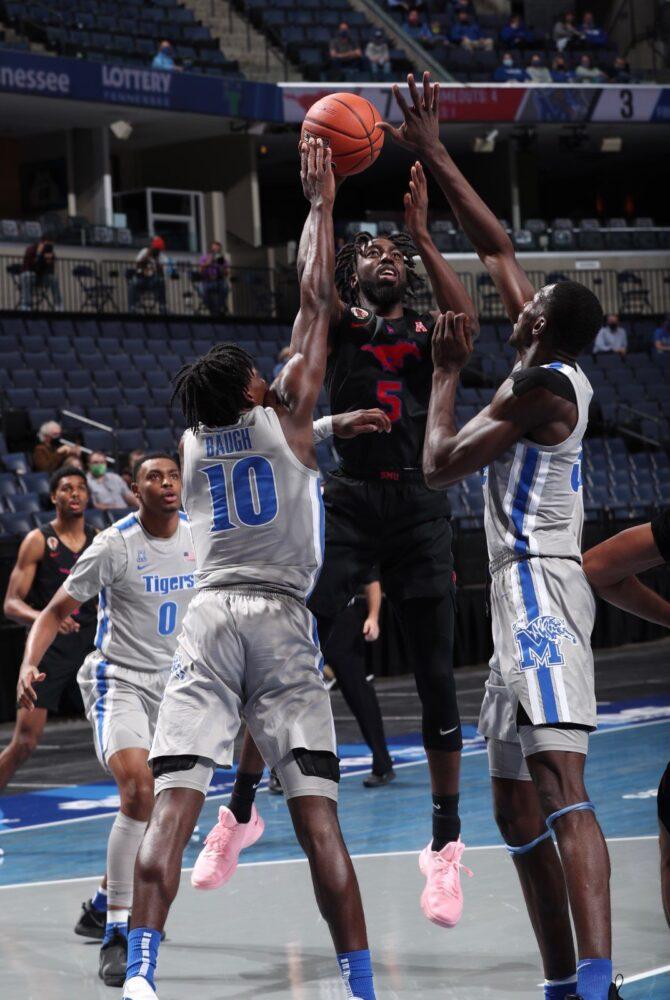 The shot clock was ticking down. Kendric Davis was in trouble. He had a defender on his right and another converging on his left.

So, the junior point guard did the only thing he could do with SMU down three and less than two minutes to play: He hung in the air until his vision cleared and heaved the ball in the vicinity of the basket. This time, though, it went in.

But, minutes after the ball hit the ground, that same basket was waived off. Officials deemed that Davis’ potential game-tying three-pointer was shot after the shot clock expired.

“It happened so fast, the shot went up, and obviously we wish for a different outcome,” Yaphett King, SMU’s co-head coach in the interim with Tim Jankovich out, said after the game. “But those officials are good officials, and we trust their judgment. That’s what they’re paid to do, and we have to live with the result.”

Davis had a different take.

“Never been the one to question refs ever, but the (three) I hit to tie the game was absolutely a basketball and they waved it off,” Davis tweeted after the game in a post that has since been deleted. SMU did not make players available after the game.

“They went and watched it and they still said no basketball. Wow makes me wonder,” Davis finished.

Either way, the swing of emotions left SMU grappling with its first road loss of the season, 76-72.

And, even for all of Davis’ last-minute exploits, the closing act of this game was not necessarily indicative of SMU’s uneven performance on the night.

Davis himself nearly recorded more turnovers, six, than points, eight. SMU was haunted by foul trouble in the front court. And, as has been the case this year as well, SMU went on stretches of being efficient juxtaposed with durations where it looked painfully mortal.

It culminated in SMU dropping a game where it had a 13-point lead in the first half. Perhaps, above all, it meant SMU fell to a Memphis team that is jockeying for second place in the conference with the Mustangs ahead of a Thursday night rematch in Dallas.

“We had our opportunities, we had our chances,” King said.

And that might have been the quote that better defined the night, even when the final minute gets the headlines.

SMU raced out to take a double-digit lead in the first ten minutes of the game, only to be followed by an equal counter by Memphis. That proved to be a trend.

The ebb and flow of the game resulted in each team going on long runs, until the final minutes where a bevy of threes fell on both sides.

Tyson Jolly, playing in his second game back, led the way with 15 points and three triples of his own. He played 21 minutes off the bench.

“Tyson was good today. For the second game back, to be able to go out there and compete with these guys, and do what he’s capable of doing,” King said. “ We’re excited to have him back.”

SMU went on a 15-3 run in the first half, but went into the locker room down by three. Equally impressive in the second half, it scored nine consecutive points to tie the game at 52. Then, Memphis finished the game on a 28-8 run.

The issue didn’t seem to be with the offense. SMU scored over 70 points and hit a season-high 11 three-pointers. It was more that SMU just didn’t have an answer for the Tigers.

Five Memphis players scored in double-figures, including two players off the bench. DeAndre Williams, who finished with 10 points, hit the dagger three down the stretch.

SMU lost for the first time this year when scoring over 70 points, making it 7-1 in those spots.

In a rare home-and-home series with Memphis, SMU will play the Tigers again in less than two days. The teams left the court almost nodding at each other, knowing their paths would cross again with only the city changing.

“We will go over the film with Tim [Jankovich] on Zoom and figure it out,” King said.