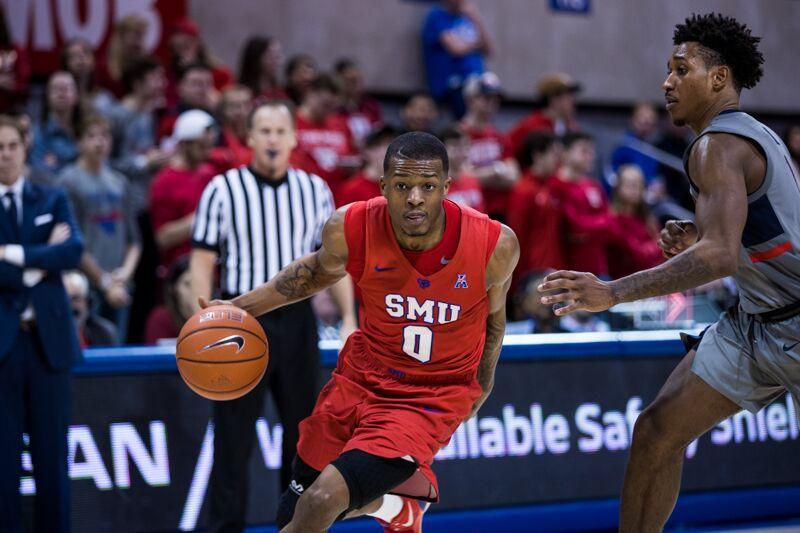 Every time SMU needed a bucket in its AAC Tournament opener in Tulsa, Jahmal McMurray delivered. The senior guard had 27 points in SMU’s 74-65 win over the Golden Hurricane, consistently coming through in big spots.

With 2:43 remaining in the game, Tulsa had cut an SMU lead that had once ballooned to 20 points, down to six. The Golden Hurricane was starting to find success against an SMU defense that stifled it most of the night. But as SMU’s lead seemed shakiest, McMurray struck.

He bought himself space with a slick turnaround move and buried a jumper. After SMU got a stop, he rocketed down the baseline for a catch-and-shoot corner 3-pointer. He drained it. SMU’s lead was back up to 11 points and Tulsa never got close to overcoming it.

“I know I’m a scorer, so making big shots is something I can do,” McMurray said. “But just really stayed poised and not rushing in my shots, not getting sped up is what allowed me to play good tonight and make shots.”

While it took some late-game heroics from McMurray to seal the win, the game looked like a blowout in the making early. SMU was red-hot in the first half, making 61.5 percent of its shots, and the gaudy percentage wasn’t just on layups. The team made six 3-pointers and Jimmy Whitt rained in several mid-range jumpshots.

McMurray and Chargois were both offensive hubs; McMurray creating space for jumpshots with his dribble and Chagois operating out of the post, going up strong for layups.

SMU’s defense has consistently been better with Jarrey Foster in the lineup, and Thursday was no exception. Tulsa did not score in the first seven minutes of the second half. The Mustangs operated their 2-3 zone flawlessly, contesting shots inside and outside the arc. While the defense was stifling, SMU did not do anything differently to trigger the improvement.

“We didn’t really make adjustments,” Tim Jankovich said. “We just kind of stayed the course. It had been working pretty well (in the first half), but not as well as it did for the first six or seven minutes of the second half.”

But the Golden Hurricane did not roll over after its cold stretch. With its half-court offense not working, Tulsa found a way to beat SMU zone, outrun in. It pushed the pace after rebounds and took quick shots off of inbounds passes before SMU could set up its zone, going on a 13-3 run to cut SMU’s lead to nine. But McMurray was there, knocking down a mid-range jumpshot to halt Tulsa’s run. After another short Tulsa run, McMurray’s big shots sealed the game.

While McMurray’s shot making won the game for SMU, Jarrey Foster also provided the Mustangs with a shot in the arm. Foster has been in and out of the lineup this season, nursing an injured knee. Thursday he gave the Mustangs 25 quality minutes and scored 10 points: his third time in double digits on the year.

“I was kind of putting my injury and everything that’s been going on this year in the past and kind of playing for me and for my teammates, and play to win and see how long we can keep this going,” Foster said.

SMU’s next test will be much harder. It takes on No. 24 Cincinnati, which has beaten the Mustangs twice this year and knocked them out of the Tournament last season. That game tips off at 6 p.m.