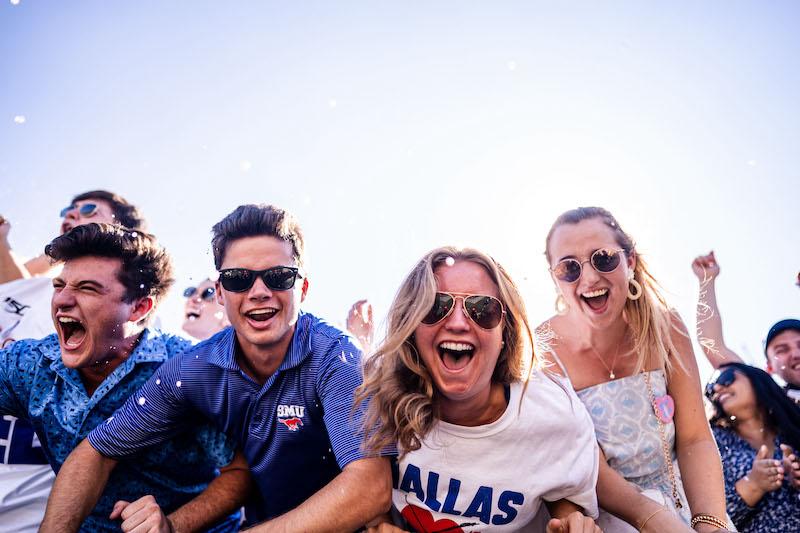 The loud slam of a dresser drawer echoes throughout the hallway of the Chi Omega sorority house as senior Claire Schmidt looks for her well-worn, lucky, game-day jersey. The framed picture of Southern Methodist University’s Gerald J. Ford Stadium on her wall clatters from the force of her frustration. Two hours stand between her and kickoff.

Known for never missing an SMU football game, Claire’s face burns a fiery color as she continues to drudge through her clothes. After spending four years on campus, she refused to be marked absent for her last, on-campus SMU football game against the University of Houston. With 58 minutes to spare, her arms yank the beloved, wrinkled mess from behind her bed, and she slips it over her head. “It’s game time,” she announces.

For Claire, being a female sports fan comes with a few high fives and a lot of sideways glares. Despite the side-eyes, she refuses to march to anyone else’s beat. “I have never been afraid to try new things,” she says. “I just don’t want to do the same things as everyone else.” As a child, Claire ignored the stereotypical female experience of ballet shoes and tutus for cleats and a lacrosse stick. At 4, she made a splash on her competitive swim and dive teams. As she grew older, she embraced her “tomboy” identity, but the stigmas that surround female athletes rose faster than she could swim.

Other female sports enthusiasts know the challenges and excitement of being the loudest and most loyal fan in the bleachers. Anne Osborne, the lead author of Female Fans of the NFL: Taking their Place in the Stands and director of media studies at Syracuse University, discovered through her research that society is socialized to view sports in a general way as a masculine endeavor. “It is hard for women fans to find a place in sports and a place where they are taken seriously because sports leagues tend to talk to women in a patronizing way,” Osborne says. “Instead of always being women who happen to be fans, they should be seen as fans who happen to be women.”

As a young girl, the search for a better fan experience sent Claire to other schools’ stadiums. She often traded the hushed cheering of the Grapevine Faith Lions for a seat on the more vocal bleachers of the Southlake Carroll Dragon Stadium, a place where her friends played football and that delivered a more rambunctious sports experience. “I played lacrosse for Southlake and went to church there, so I was friends with the players on the team,” Claire says. “I ended up at those games because they were more of a football school than mine.”

Claire’s father, David Schmidt, played a key role in her deep love for athletics. They bonded over their shared passion, and he encouraged her to participate in the vast number of sports she explored growing up. As a former Creighton University baseball player, he understood the benefits of athletic involvement and cheered on her participation. When she was growing up, the dynamic duo often traded the fuss of a daddy-daughter dance for the comfort of an NFL game on the plush leather couch in their family room. “I really found my love for football and baseball when I would watch games with my dad,” Claire says. “It was something that we did together that was super special.”

Her father describes Claire as curious and highly dedicated to what she has in front of her. “For Claire, sports are more of a passion,” he says. “She has a passion for being part of the community and being a part of something bigger than herself.”

Claire brought all of those qualities to SMU. Her infectious laugh and friendly banter deliver a welcomed alternative to the traditional gameday smack-talk. Chloe Chatham, a fellow senior, is one of many in Claire’s circle of friends at SMU, and she enjoys how Claire amplifies the excitement of a game. “Claire is upbeat and has a ton of energy on a gameday,” Chatham says. “She is always cheering before even stepping foot in the stadium.”

Her spirit stands out regardless of the venue. Even on the Boulevard, the epicenter of go-Mustangs energy and SMU’s version of tailgating, Claire’s fandom is obvious. “The pre-ritual aspects of a game are special to me. So I get to the stadium before kick-off to watch the band, the rushing of the field, and the prayer,” she says. “I always stay for the entire thing, and I never miss a home game.” In fact, it’s easy to find Claire with a beaming grin on gameday because she’s always a leader in the charging of the student section wall in Ford Stadium each weekend on home games. And sometimes she takes the charge on the road. “I flew all the way to Tennessee my freshman year for ESPN College GameDay for the SMU v. Memphis game,” she says. “I pushed my way through the crowd to get to the front row –– it was only a 24-hour trip.”

Her big grin and energy also mean she frequently earns the attention of photographers seeking to document the game. Ella McDonald, an SMU football staff photographer, captures gameday moments shared between students, and she remembers Claire as a student with notable spirit. Her jumping up and down, her clapping along to the music and her magnetic excitement stands out. “Claire, and students like Claire, change the energy of the games for the better,” McDonald says. “I wish there were more students like her because the more engaged they are, the more fun content I get to share with the community.”

But Claire shows up to sports events with more than enthusiasm. She also brings a bit of a mission, seeking to break the stereotype of female ignorance of sports. “I love a learning opportunity,” she says. “I want to give other girls the chance to feel confident around men, instead of inferior when talking about sports.” And she wants other female sports fans to embrace their authenticity and share in her confidence. That’s what she did. Claire learned to seek out people who admired her authenticity, goofy jokes, and booming laugh that often arrives at inopportune times.

Her friend Chatham describes her as an upbeat, energetic storyteller who enjoys narrating her good and bad days on the regular. Daily, Chatham hears the text chime of her phone and comes face to face with videos of Claire’s “finest moments” sent from well-meaning, mischievous friends. A favorite was the time a friend captured her tripping into a bush. But she’s also known for her belly-busting laugh that she sometimes tries to stifle in her throat. “She’s an engaged friend, always making everyone smile and laugh,” Chatham says. “Claire genuinely wants to help people become their best selves.”

Claire’s dedication to her passions inspires those who cross her path –– in the student section or not. “I’m always going to be myself,” she says. “I’ve learned that you can’t make everyone happy, just yourself.”

As the last home game of the season before Thanksgiving break comes to an end, Claire rests her right hand over her heart during the National Anthem and pridefully throws the SMU hand sign in the air at the game’s close. The once sweltering August heat of the start of the football season has turned into a crisp November breeze, signaling the end of Ford’s football events. The SMU Mustangs beat the Houston Cougars 77-63 in a historic win — it was the highest-scoring regular-season game in college football history.

As the daylight turns into a starry, deep blue sky, Schmidt walks home. Back in her room, she slips off her beloved cobalt blue jersey and neatly hangs it in the closet. 301 days stand between her and the ring of the referee’s whistle, and, hopefully, by then she will know where to find it even though it will rest in a post-grad closet. “I feel like over the last four years I have grown with the team,” Claire says. “It’s bittersweet to know I’ll never spend another SMU game from the student section, but I’ll always be a fan, and I’ll have those memories forever.”