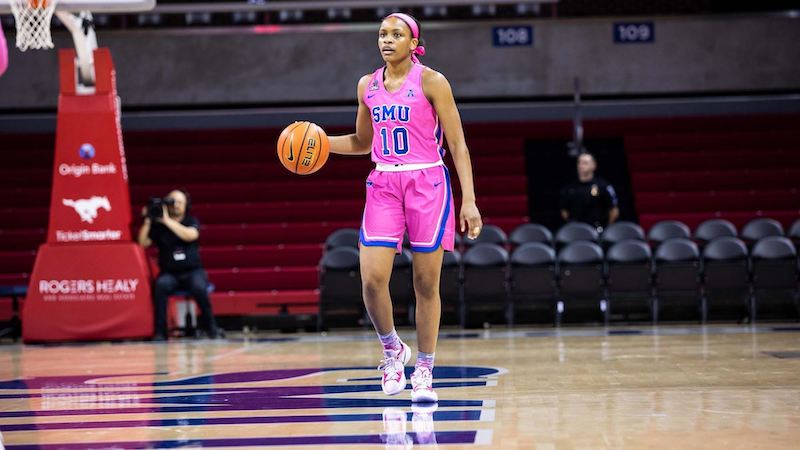 The Memphis Tigers held off the Mustangs 72-54 in Moody Coliseum on Wednesday night through balanced guard and forward play, despite SMU guard Jasmine Smith scoring a game-high 20 points.

The game started with a 7-0 run from the Tigers, resulting in an immediate timeout from SMU.

As the quarter passed, the lead extended, and SMU failed to rattle Memphis as the Tigers took control of the game early. The Tigers were up 25-11 at the end of the first quarter.

SMU did try to rally back against Memphis in the second quarter behind a sequence of buckets from Kayla White, but the lead continued to hover around 14.

Memphis continued its control in the second half. The team connected on 54% of its three point attempts, and shot 49.1% from the field overall. The Mustangs zone stood little resistance in the way of hot shooting.

SMU also shot just 38.2% from the field and 31% from three. The team was out-rebounded by 16, as Emani Jefferson of the Tigers brought down seven rebounds, more than any other SMU player. She attacked the basket relentlessly, and chipped in with 13 points in the night.

Still, there were some bright spots from the Mustangs. Senior Guard Jasmine Smith put up 20 points shooting 50% from three on her ten attempts.

Her backcourt partner Kayla Smith had 15 herself, putting her only 24 shy from her 1000th point at SMU. She continues an impressing scoring season, where she averages 13.9 points per game, a career-high for her in a career-low 23 minutes a game.

Forward Alan Davis dominated the paint for the Tigers. She had a team-high 18 points and also knocked down two three-pointers as a stretch four.

SMU is now 11-10 overall in the AAC. It will face its next challenge on the road this Saturday against Tulsa at 1pm.