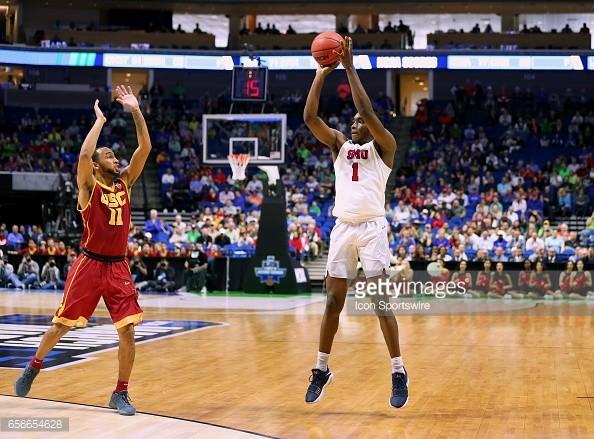 SMU men’s basketball will play its season opener Friday against UMBC, looking to follow one of the best seasons in the program’s history. The Mustangs went 30-5 last year, winning the American Athletic Conference regular season title and the conference tournament before falling to USC in the first round of the NCAA Tournament.

Repeating the success will be a challenge for the Mustangs. They lost three key contributors to the pros and will have to rely heavily on freshman to fill voids. Let’s take a look at how their roster breaks down for the upcoming season.

SMU will be without three-fifths of last season’s starting five. Semi Ojeleye now plays for the Boston Celtics, Sterling Brown is on the Milwaukee Bucks and Ben Moore plays for the G-League’s Fort Wayne Mad Ants.

With Ojeleye, Brown and Moore departing, SMU lost some of its best talent and leadership. Ojeleye was the best player not only on the team, but also in the conference last year. He paced SMU in points, averaging 19 per game and finishing second on the squad in rebounds with 6.9. He also worked efficiently, shooting 48.7 percent from the field and 42.4 percent from the three-point line — impressive marks for a high-volume scorer. Ojeleye received AAC Player of the Year honors at the end of the season.

Brown and Moore were also extremely valuable as seniors. Both players featured diverse skill sets, they were capable of passing, rebounding, scoring and defending at a high level. In addition, they had been with the program for four years and provided valuable senior leadership.

In addition to the three stars, role-playing guards Dashawn McDowell and Jonathan Wilfong left the team. Wilfong, a walk-on and fan favorite, graduated, and McDowell transferred to University of Seattle.

SMU’s returning players will have to shoulder a much larger load with the exits of Ojeleye, Brown and Moore. The Mustangs will have to replace over 45 points per game that were scored by now-departed players.

Junior Shake Milton will be asked to play a much larger role. He started every game last season and averaged 13 points, 4.1 rebounds and 4.5 assists per game. This season, he was named the preseason AAC Conference Player of the Year and is widely regarded as a potential first-round pick in the 2018 NBA Draft. To reach those lofty expectations, Milton will likely have to improve his numbers. He is a good three-point shooter, knocking down long balls at a 42.3 percent clip last year, but will have to produce volume scoring from both inside and outside the arc this season. With Ojeleye gone, Milton will likely take his spot as the team’s go-to scorer with the game on the line.

SMU’s other two returning players are Jarrey Foster and Ben Emelogu. Foster started all but two games for the Mustangs last season and took a major step forward from his freshman year. He averaged just less than 10 points per game and played solid defense for the team. Like Milton, he will have to pick up his scoring as he becomes an upperclassman and one of the team leaders.

Emelogu is entering his senior season, and while his numbers are not impressive, he fills an important role as a defender and ball-handler for SMU.

SMU is bringing a boatload of fresh faces to the team this season. Arkansas transfer Jimmy Whitt will be able to take the court this season after redshirting last year. Whitt is an athletic guard who can handle the ball and could start for SMU in his first season playing for the team. While Tim Jankovich’s play style does not funnel players in to specific positions, Whitt will likely share point guard duties with Milton this season.

Another transfer that will be important for SMU is Georgetown graduate transfer Akoy Agau. Moore and Ojeleye were SMU’s only forwards to receive significant playing time last season, and Agau will be the only non-freshman with the size to replace them at that spot. Agau will not be a big scorer for this team – he averaged just 4.5 points per game last year – but he will be tasked with guarding opposing centers for much of the game.

A transfer who can and will score is former South Florida guard Jahmal McMurray. McMurray averaged 15.2 points per game for the Bulls two seasons ago and averaged 20.3 last year in the three games he played before transferring. McMurray will debut for SMU Dec. 18, when the Mustangs face Boise State. He will pack a powerful scoring punch in the backcourt.

Featuring only Agau as an experienced big body, SMU will rely heavily on freshmen forwards Everett Ray and Ethan Chargois.

Ray’s muscular frame should make him an effective rebounder. He snagged 17 in one of SMU’s exhibition games in Canada this summer. Chargois, while two inches taller, is the more skilled of the two.

SMU’s other two freshmen, William Douglas and Elijah Landrum, will be joining a crowded backcourt. Landrum is a 6-0 bundle of speed who averaged 25 points and nearly four steals as a senior in high school. Douglas stands at 6-5, and the Memphis native was a four-star recruit when signing to SMU.

The Mustangs will have a tougher schedule than last season, as they could face four of the top 12 teams in the nation if they match up with No. 3 Arizona in the Battle 4 Atlantis. The Mustangs’ most meaningful non-conference battle will be a showdown with No. 10 USC in Moody Coliseum, when SMU will look to avenge last year’s season-ending loss.

Despite winning the AAC regular season title and the tournament last season, SMU was picked to finish fourth in the preseason coach’s poll. The teams selected to place ahead of them are No. 12 Cincinnati, newcomer No. 7 Wichita State and Central Florida.

The Mustangs caught fire in conference play last year, coasting to a 17-1 record with the lone loss coming by two points in Cincinnati. This year, the AAC should be better and offer SMU more challenges on a game-by-game basis.

The Mustangs are no lock for the NCAA Tournament; they must prove that they can replace the talent that they lost. But with some improvement from returning players, contributions from freshmen and transfers, and a touch of Tim Jankovich’s coaching magic, this team could be headed back to the Big Dance in March.