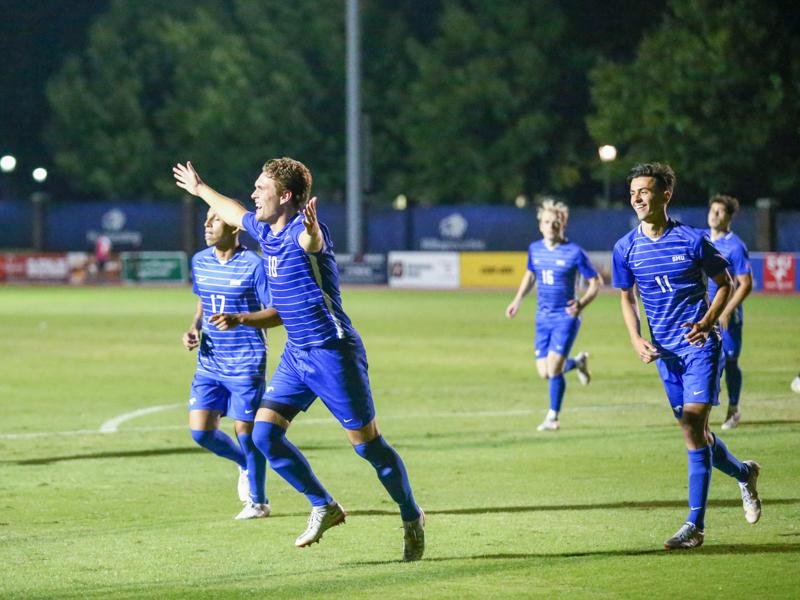 DALLAS, TEXAS – SMU Men’s Soccer added another win to the books on Sunday night as they defeated the University of Alabama-Birmingham 1-0 at Washburne Stadium.

“I told the guys at the beginning of that stretch, this is a very important stretch in 10 days, what can we get out of it?”, recalls head coach Kevin Hudson. “So if you would have said nine points, I’m obviously very pleased.”

Coming into the game, UAB (now 2-7-2, 0-3-2) had not won a game since August. It may not have come as a surprise, then, that in many ways SMU dominated the game – controlling most possession, outshooting their opponents 19-9, and earning 10 corner kicks to UAB’s 1.

Although UAB had the first real chance of the game (coming in the 6th minute), SMU quickly gained the front foot. Midfielder Harvey Castro had his 11th minute shot saved, while forward Jose Ortiz scored an acrobatic close-range goal in the 16th minute, but was ruled offside.

SMU continued to pile on the pressure, as winger Alexander Petraeus, forward Bailey Sparks, and right-back Nikola Djordjevic all found themselves with good opportunities to score. UAB goalkeeper Jack Hudson made several saves to end the first half, finishing the game with eight.

SMU’s patience paid off as they found the breakthrough just two minutes into the second half, as Petraeus made a dangerous run into the 18-yard box, leading to a penalty. Midfielder Knut Ahlander stepped up to take the kick, calmly slotting the ball towards the bottom left. It was Ahlander’s tenth goal of the season, a team-high.

KNUT getting it done 👏 pic.twitter.com/nDOYmuG6Xx

UAB responded quickly, however, forcing a big save from SMU goalkeeper Bram Kaarsgaren three minutes later. In the 69th minute, UAB thought they had earned a penalty kick of their own, but after a video review of the foul, a free kick was awarded instead. UAB continued to create chances with a close-range shot in the 78th minute just missing wide, as the Mustangs were able to hang on and keep the clean sheet.

“I’m happy with the result”, reflects Coach Hudson. He added that the gritty win showed a lot of maturity from a young SMU team, as they handled the frustrations of a scoreless first half in which they had the upper hand, and then fought to keep their slim lead.

“There’s more belief and confidence within the group”, Hudson said, speaking of building their winning streak.

However, he points out there is still much room for growth. “We have not put a whole complete 90-minute performance together”, he notes, “so we don’t have [our] full identity, but we’re getting closer.”

Their identity will soon be put to the test as the team travels to face Charlotte this Saturday, hoping to retain their place at the top of the AAC.