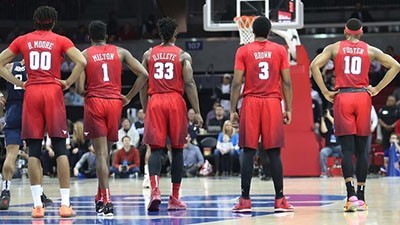 From the moment that former SMU head coach Larry Brown and staff saw Shake Milton play for the first time, they knew he would be special.

Considering the interest Milton garnered as a prospect out of high school, so did many others. During his junior and senior years, the four-star guard may have been the biggest attraction in Owasso, Oklahoma.

When Milton committed to SMU in October of 2014, the program gained a player a future could be built around. Milton, though just a sophomore, is currently playing beyond his years. His 27 point performance in the Mustangs’ 85-64 win over Houston on Saturday night showed off Milton’s capacity to score from everywhere. For a team with so many interchangeable parts, Milton is becoming a constant.

“My teammates did a great job of feeding me,” Milton said in the postgame press conference. “Them having that confidence in me really helps my game and allows me to be confident in my shot.”

Milton has finished in double figures 17 times this season. Coming off a season high 23 point performance against Connecticut on Thursday, Milton’s 27 against Houston set a new career high. He shot 67 percent (10-for-15) from the field and 75 percent (6-for-8) from three-point range.

“Did anyone have a better week in America than Shake?” SMU head coach Tim Jankovich asked postgame. “His confidence is sky high.”

Jankovich attributed much of Milton’s success to the sophomore’s mature in-game vision.

“We knew when we recruited him he was an outstanding player,” Jankovich said. “Great players see the game and play the game in slow motion. Shake has that naturally, we saw that in high school, that is a talent. You put on top of that his I.Q., his dribbling, passing, shooting skills and size – that’s a real player right there.”

Milton’s vision may be rubbing off on his teammates as the Mustangs methodically dissected a Cougars squad that is playing some of its best basketball in years. SMU’s crisp passing led to high-percentage shots that kept the Mustangs in the lead the entire way. SMU shot 57 percent from the field and 48 percent from three-point range.

On the defensive end, SMU set up shop on the perimeter, making the night tough for a Houston team with the best collection of three-point shooters in the conference.

“I thought we guarded tremendous the first half,” Jankovich said. “I couldn’t have been happier…that was really important.”

Offense may have been SMU’s best defense against Houston. Whenever the Cougars would cut into the lead with deep shots, the Mustangs would answer. Five Mustangs scored in double figures. Both teams combined for 27 made three-pointers – Houston sunk an extra three, but SMU shot a higher percentage.

“We’re a very unselfish team,” Milton said. “So whoever’s hot is going to get the ball.”

Seniors Ben Moore and Sterling Brown added 10 points apiece and showed great poise on the defensive end. SMU won the rebounding margin by 12 (35-23), eight of which were brought down by Brown.

Sophomore guard Jarrey Foster finished with five points after playing only 18 minutes in the first half. Foster did not return from the locker room following halftime after suffering an undisclosed injury. Jankovich gave no updates on Foster’s condition postgame, but did say Foster wanted to play. Foster did take a couple stiff shots on the defensive end in the first half and was already playing with an illness.

Guard Ben Emelogu, who absorbed most of Foster’s minutes, finished with a season high 13 points on 83 percent (5-for-6) shooting from the field and 75 (3-for-4) percent shooting from deep.

Taking down a conference rival by 21 at home is not just enjoyable for the fans, but also the players. As SMU continues to hit its stride in conference play, the Mustangs will try to make the most of every moment.

“You don’t get too many of these – playing at home, playing in a city like Dallas,” Ojeleye said postgame. “I think we need to try to have more fun and try to just let it all out while we’re out there.”