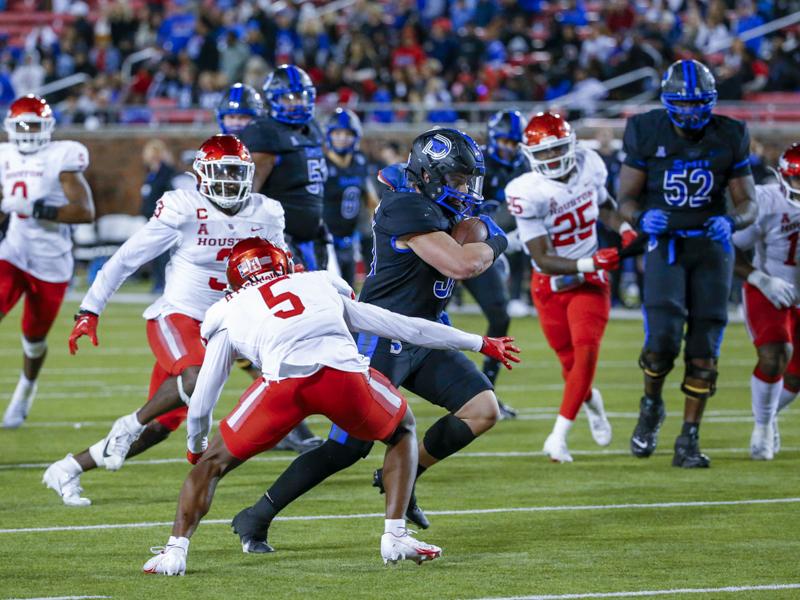 UNIVERSITY PARK — Quarterback Tanner Mordecai tied the record for most touchdowns by an SMU player with nine touchdowns against Houston in Dallas on Saturday.

For the first 22 minutes of the game, visiting University of Houston played toe-to-toe with SMU in what seemed to be the last ever conference game between these two at the Gerald Ford Stadium.

But on a free-scoring night where everything seemed to be going swimmingly for both offences, two key defensive plays made the difference, and ensured a victory for the Mustangs.

“I have never seen anything like that before,” SMU head coach Rhett Lashlee said after the game.

But Tanner Mordecai stole the show.

In his first game since a 8-day injury hiatus, Mordecai displayed all of his skills, tieing a school-record nine touchdowns, including one rushing TD that put the Mustangs into the lead before the half. At he end of the game, he had 379 yards on 28 of 37 pass completions.

For Mordecai, this game was much of a refresher.

Sitting out last week gave me a new perspective going into this game, he said.

“Sitting down helpless made me take a step back and remember never to take my place for granted.”

SMU running back Tyler Lavine had 147 yards and one touchdown in the game while star receiver Rashee Rice had 86 yards and two touchdowns. Tight end Ben Redding finished the game with three touchdowns.

Four days before the game, Lashlee was already very confident his team was going to win.

Many of our guys looked confident and ready to play in the days leading up to the game, Lashlee said.

“We felt very good about the game plan since Thursday when I talked to the guys about getting their mindset right for the game,” he said.

This is the last we would see of this matchup since Houston are moving to the Pac-12 conference next year.

The combined 140 points on the night broke the NCAA single-scoring game record for two teams in regulation when Pitt beat Syracuse 76-61 on Nov. 26, 2016 to combine for 137 points. This game also broke the record for most points by SMU in a single football match, with the previous record being 72 against Houston in 2012, the same opponent.

The Mustangs are now 5-4 in the season, and 3-2 in the Conference. One more win, and the team would reach bowl eligibility.