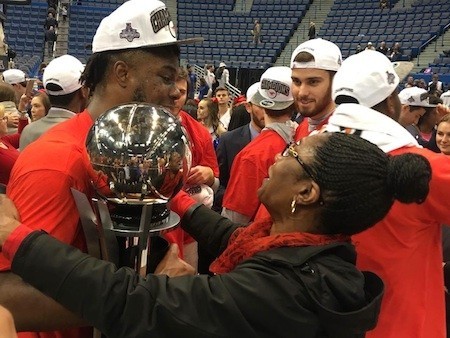 HARTFORD, Conn. — When SMU’s Ben Emelogu hit a 35-footer at the halftime buzzer of Sunday’s championship game against Cincinnati, the expression on the faces of both Mustangs and Bearcats fans read the same:

“What is going on right now?”

Some were visibly elated, others seemed very confused. Neither team was following the script. The American Athletic Conference Tournament final was supposed to be a brawl. We were promised “Armageddon, Part 3.”

Instead, No. 12 SMU led Cincinnati by nine. Eight minutes into the second half, the Mustangs had extended that lead to 17.

SMU led the Bearcats wire to wire, minus a 37 second stretch in the opening minutes when the score was tied at two. The Mustangs never trailed in the game.

In SMU’s 71-56 win over the Bearcats on a neutral floor at the XL, the lead changed exactly zero times. The Mustangs opened the game on an 11-2 run and never let up.

“We had to get off to a good start, jump on them early,” SMU senior guard Sterling Brown said. “From that, there was no looking back. We were ready for this game.”

Tim Jankovich, who was recently named AAC Coach of the Year in his first season with the Mustangs, shared Brown’s sentiment.

“They’ve been absolutely fabulous all season long,” Jankovich said. “They never cease to amaze me, including today, and I’m just happy for everyone in our camp.”

“I’ve been telling people how good they [SMU] are for a long time,” Cincinnati head coach Mick Cronin said postgame. “They made it look easy, which is hard to do against our defense. That’s a credit to them, their talent, their execution. They were just the better team today.”

Cronin was right, the Bearcats did not have it and the Mustangs wanted it more. The momentum SMU built in the first half became insurmountable. The Mustangs shot 50 percent (26-for-52) from the field on the game to Cincinnati’s 31 percent (19-for-61). The Bearcats shot a dismal 17 percent (4-for-24) from the arc.

It did not feel like a contest for most of the game, which again, is strange considering both teams entered Sunday’s game with similar resumes and 29 wins.

Why was the outcome so surprising? Because before the season began, nobody knew if SMU would be good enough to make the NCAA Tournament, let alone the conference championship.

The offseason had been eventful. Head coach Larry Brown ditched the program following a contract dispute. Coach-in-waiting Tim Jankovich was quickly thrust into the position. On top of that, the Mustangs were coming off a postseason ban with limited scholarships.

To make things worse, SMU had to replace Nic Moore, Markus Kennedy and Jordan Tolbert. They did so with three freshman, two of whom later transferred, plus Duke transfer Semi Ojeleye, a high school basketball prodigy that somehow played only 143 in two seasons with the Blue Devils. Jankovich’s team was undersized, undermanned and supposedly not as talented as Cincinnati.

Despite all of this adversity, the Mustangs won 30 games, a program record, with just seven scholarship players. It was not easy, but like Cronin said, they made it look easy.

Sunday’s game was not even close. Few of SMU’s games this season have been.

The Mustangs averaged a winning margin of 16.8 points in their 20 wins against conference opponents. SMU lost only one conference game, and that was to Cincinnati.

SMU’s biggest asset might be the Mustangs’ bizarre composition: a team with no scholarship players taller than 6’8 that is still the 10th tallest team in the NCAA by average height. Small numbers have allowed for incredible synergy and balance.

“Our chemistry is as high as any team in the county,” Ojeleye said. “It was only a matter of time until we hit our stride in tournament play.”

“This is not normal,” Jankovich said. “This is not just a bunch of guys that had a good year and they’re going to the tournament. It runs deeper than that.”

Ojeleye was named AAC Player of the Year and voted to the All-Conference First Team earlier this week. He also was the MVP of the tournament.

SMU has been unconventional this season, but made up for it in the aggregate. The Mustangs are a perfect example of a team that got overlooked for being different – a 30 win team still going unnoticed by some.

SMU showed Sunday that it was ignored way too long and how dangerous it could be down the line in March. The Mustangs also proved that if the season ended today, what they have accomplished would be nothing short of remarkable.

Jankovich and Co. drew a No. 6 seed in the NCAA Tournament, much to the chagrin of SMU fans, who thought it was way too low. But the Mustangs are more than okay with it.

When you have made a season, a college career out of proving people wrong, why stop now?