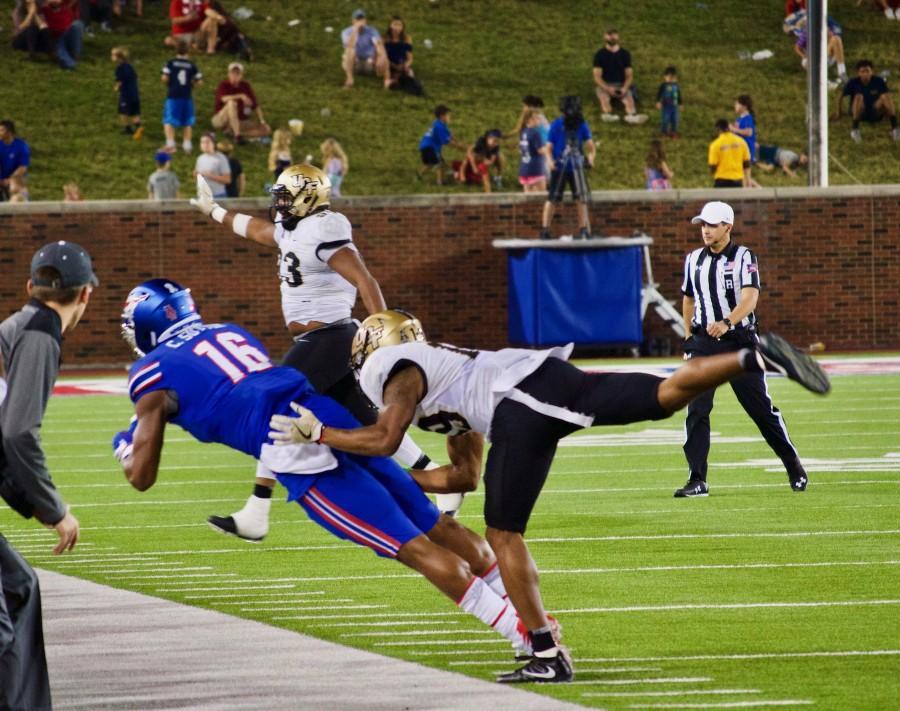 Things were looking up for the SMU Mustangs late in their 31-24 loss against Central Florida on Saturday night. Down just seven points to the No. 18 team in the country, they were driving the ball down the field with an opportunity to tie the game.

The Mustangs had two plays to get two yards and continue their drive. They had all the momentum on their side, and the home crowd behind them. It looked like they would pick it up.

But on third down, Ben Hicks was stopped for a one-yard loss, making the task a little bit more difficult. On fourth down, Hicks evaded the rush and looked to hit the nation’s leading receiver Trey Quinn just past the sticks for a first down.

But Quinn dropped it. Turnover on downs. UCF ball with just 4:50 left in the game.

“Bless his heart,” SMU head coach Chad Morris said. “He’s a competitor—how many plays has that guy made? I know he’s sick about that, but he’ll bounce back.”

Still, the game wasn’t over. The Mustang defense had one last chance to hold and force a quick punt, but it’d be a difficult task. UCF’s offense had already racked up close to 600 yards of total offense, and recorded big play after big play. It looked like the SMU defense was just overmatched. The first play of the drive further reinforced that thought. Adrian Killins Jr., the Knights’ star running back, found a crease and ran down to the SMU 37 for a gain of 25.

Then the SMU defense stepped up in a big way. On second down, it stopped Killins Jr. in the backfield for a two-yard loss. On third down, defensive end Delontae Scott got into the backfield untouched and body slammed McKenie Milton for a 12-yard loss. The Knights were out of field goal range and forced to punt. The Mustangs were back in it.

SMU took over on its own 20 yard line with 2:40 left, needing a touchdown to tie the game. The Mustangs got a first down after three plays, but couldn’t get any more yardage. On fourth down and 10, with just 1:24 left, Hicks’ pass couldn’t find Courtland Sutton. The Mustangs turned it over on downs, effectively ending the game.

SMU couldn’t capitalize on several key chances early in the first half. After James Proche’s 86-yard touchdown reception on SMU’s first drive, UCF took over at the Mustangs’ 25. On third down, SMU defensive back Mikial Onu intercepted a Milton pass at the Knight’s 43. Even with great field position, SMU went backwards and had to punt.

Early in the second quarter, the Mustangs drove down the field with the opportunity to take a 14-7 lead over the Knights. On third and two from the UCF 10, Ke’Mon Freeman took a wildcat snap and ran over the right side before he was hit at the goal line, jarring the ball loose. A Central Florida player jumped on the fumble in the end zone for a touchback. It was the Mustangs’ first lost fumble of the season.

“[That play was] very uncharacteristic of us,” Morris said.

The Mustangs trailed 21-14 going into the half, but cut the lead to 21-17 on a 45-yard field goal by Josh Williams. It was his second-longest field goal of the season. The Knights would respond just two plays later when Killins took a cut through the Mustang defense en route to a 64-yard score that put Central Florida up 28-17. SMU pulled to 28-24 at the end of the third quarter on a 2-yard run by Xavier Jones.

After a UCF field goal that put the Knights up 31-24 early in the fourth quarter, SMU had another chance at points. Aided by a stout running game, the Mustangs moved the ball down to the Knight’s 41 before the drive stalled after two incompletions, and SMU was forced to punt. It was one of several missed opportunities on the night for SMU.

“We can’t let SMU beat SMU,” Morris said. “And we had that tonight.”

Ben Hicks was solid again against UCF, completing 27 out of 51 passes for 283 yards and a score. Hicks also added 54 yards on the ground, a career-high for the sophomore signal-caller.

“Probably the most I’ve ever had in my entire career, ever,” Hicks said.

Trey Quinn led SMU in catches with 11. However, it was Proche who stole the show. The sophomore receiver had 7 catches for 173 yards, his second-straight game of with over 100 yards receiving.

“James played a heck of a game,” Hicks said. “He’s done a great job all year of playing hard and winning his one-on-one battles and I think that’s what he did again tonight.”

The Mustang defense yielded 615 yards to the nation’s number-one offense, but held the Knights, who average 51 points-per-game, to just 31. Chad Morris saw that as a small victory.

“Outside of a few busts, we swarmed to the ball better,” Morris said. “We created three turnovers and a pick six, but again we’ve got to clean up a few of those mistakes.”

The Mustangs still control their fate in the American Athletic Conference’s West Division. However, they’ll likely need to win out to secure a spot in the conference championship game. They have a tough road in front of them, with Navy and no. 21 Memphis still on the schedule. Morris still has faith in his team as it moves into their most difficult stretch of the season.

“We’re good enough to play with and complete with and to beat some of the best teams in the country,” Morris said. “We’re not far off.”

SMU plays at Navy at 2:30 p.m. next week. CBS Sports Network will air the game