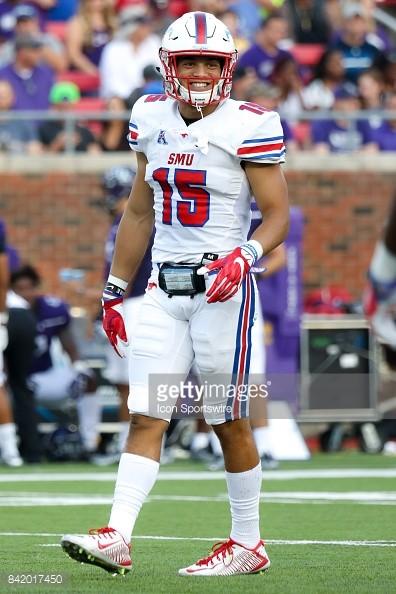 Two years ago, the SMU Mustangs lost to FCS school James Madison at home by just three points. Last year, they struggled against Liberty, another FCS school, pulling out a win in the final few minutes.

However Saturday night, the Mustangs showed how far they have come in the Chad Morris era, racing out to a 38-7 halftime lead before downing FCS school Stephen F. Austin 58-14 at Gerald J. Ford Memorial Stadium.

“This was much needed for these young men,” SMU head coach Chad Morris said. “A lot of work has gone into getting where we are.”

SMU’s offense had received the bulk of the attention during the offseason, and for good reason. However the defense stole the show early, holding Stephen F. Austin to just seven points in the first half. Cornerback Jordan Wyatt, a preseason second-team All-AAC player, showed that he is the real deal — scoring two touchdowns on an interception return and a fumble recovery.

“Jordan Wyatt picked up right where he left off,” Morris said. “I think he is one of the best players in college football.”

The defense’s success was largely due to their scheme. Defensive coordinator Van Malone called an aggressive game, blitzing early and often. The Lumberjacks’ offensive line was not able pick up the Mustangs’ pressure, which forced SFA’s quarterbacks into early throws and bad reads. SMU’s defense recorded 2 sacks and 6 quarterback hits.

It was a good sign for a unit that has struggled at times in recent years. Last year the Mustangs ranked 111th in scoring defense and 110th in yards allowed, allowing 36.3 points and 453 yards per game respectively. Saturday night, they allowed just 219 yards.

Offensively, the Mustangs were solid but showed signs of rust. Quarterback Ben Hicks, named the starter before the game, completed just nine of 19 passes. He overthrew open receivers on several passes, but showed increased poise in the pocket. Most importantly, he did not throw an interception.

“I thought I was out of rhythm a little bit tonight,” Hicks said.

Morris said that Hicks will start again for the Mustangs next week against North Texas.

The Mustangs ground attack was on all night. SMU had 243 yards on 48 attempts, and had seven players recording at least one carry. Ke’Mon Freeman had 14 carries while Braeden West led the Mustangs with 86 yards on eight carries. Xavier Jones also worked his way into the mix, recording 43 yards on 10 carries. Morris said that he expects all three to share carries for the rest of the season.

Receiver Trey Quinn, a transfer from LSU, paced the Mustangs with 53 yards on four receptions in his SMU debut. He found the end zone in the third quarter, breaking three tackles en route to a 31-yard touchdown reception.

“I told you not to sleep on Trey Quinn,” Morris said. “He makes everyone around him better.”

The Mustangs face North Texas next week in a rivalry game at home. North Texas routed Lamar 59-14 Saturday night to become 1-0 on the season. Morris said he expects a good game, but that his players must not get complacent.

“Dealing with success is going to be our biggest challenge,” Morris said.