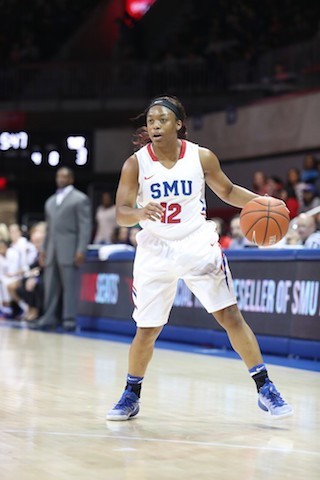 SMU secured its seventh AAC victory Monday night when the Mustangs defeated Houston 74-45 in Moody Coliseum. The Mustangs not only celebrated the victory in their final regular season game, but also the seniors on the team.

“I’m glad we were able to send the seniors out on such a fantastic note,” said head coach Travis Mays. “Led by Morgan Bolton, you can’t write the script any better. What Morgan did, her performance, is what gave our team a whole lot of confidence and we were able to come out and get the victory tonight.”

Senior Morgan Bolton scored her career high 20 points in her final game in Moody Coliseum. After trailing by one at the close of the first quarter, Bolton got the Mustangs’ momentum flowing in the second quarter by shooting triple three-pointers to boost the SMU lead.

SMU outscored Houston 20-9 in the second quarter and went on to lead the Cougars significantly in the remaining quarters.

Earlier this season the Mustangs beat Houston in Houston by 21 points, but tonight the Mustangs took home a 29-point victory.

Overall SMU’s 74 points finished the game with the most points scored and the largest margin of victory in the American Athletic Conference play.

First year head coach Travis Mays was extremely pleased by the team’s performance and recognized the value of the seniors on the team.

“The seniors have meant everything because they know they only have one more year,” said Mays. “They bought into what myself, and the rest of the coaching staff, was asking them to do and they did it to the best of their abilities. A coach can’t ask for anything more than that.”

Although tonight’s bittersweet game wraps up the regular season, now the Mustangs will prepare for the start of the AAC Championship. In a post-game press conference, Bolton reflected on her time playing for SMU and looked forward to the upcoming tournament.

“My days are really numbered now, so I’m going to make the best of them,“ said Bolton. “I’m going to miss my teammates the most, and playing with them here in Moody.”

The victory against Houston places SMU as the sixth seed in the AAC Championship. The Mustangs will play East Carolina next on Saturday night at 8 p.m. at the Mohegan Sun Arena in Uncasville, Connecticut.