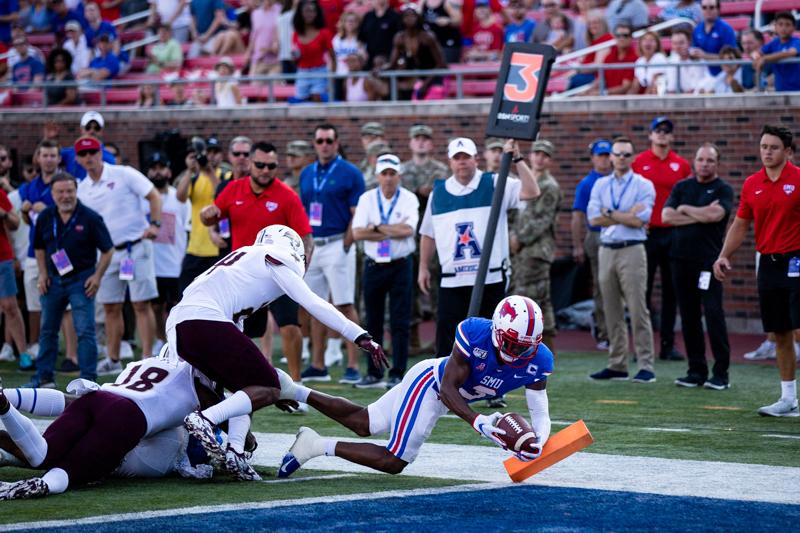 Sonny Dykes and the 2019 Mustangs took down the Texas State Bobcats at Gerald J. Ford Stadium with ease on Saturday.

The Mustangs put up 47 points on the Bobcats, and while the offense did a good job throughout the game, the Mustangs’ defense stole the show. They allowed only 241-yards and two touchdowns out of the Bobcats’ offense. Linebacker Patrick Nelson was named American Athletic Conference Defensive Player of the Week against North Texas. He did not disappoint this week against Texas State as he secured seven tackles and three sacks.

⚠️❕ He did not come out here to play nice with y’all. #PonyUpDallas pic.twitter.com/ahqWYjo4g1

“A lot of confidence and playing fast, that’s kind of what he’s good at,” Dykes said. “I think we found a good spot for him. He doesn’t have to read a whole lot of things. He just gets to react and be a football player, and that’s what he’s good at doing.”

While grad-transfer quarterback Shane Buechele had a rough day with two interceptions and his season low of 219 yards passing, the SMU backfield got the job done with downhill, power running football. Xavier Jones added another touchdown to his stat sheet, but most notably, TJ McDaniel, a true freshman out of Southlake Carroll High School, turned heads with his incredible debut.

“He just practiced at such a high level. He just does everything right. Usually, as a football player, the guys that do things right kind of get rewarded for it,” Dykes said. “Thought about playing him some last week but we hadn’t really prepared during the week to do it…When he got in there, he really produced. I think he averaged 20-yards a carry on eight carries. Not surprised really, honestly, he’s a good football player and does things the right way.”

.@run_mcd giving you a proper introduction in the first game of his collegiate career, gets himself a third TD on the night. #PonyUpDallas pic.twitter.com/8m1GjdPc0A

The Mustangs struggled at times on special teams, as they missed two extra points in their matchup against the Bobcats. With place kicker Kevin Robledo out with a groin injury, the Mustangs had Luke Hogan to kick.

The Iron Skillet Rivalry continues next week as the Mustangs head to Fort Worth to face the TCU Horned Frogs. Both teams will head into the matchup undefeated.