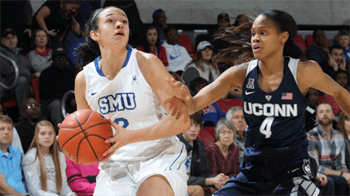 In Saturday afternoon’s matchup against the No. 1 ranked Connecticut Huskies, SMU forward Alicia Froling drove the ball straight up the floor for an easy layup and the Mustangs’ first points of the day. That bucket came with 2:06 remaining in the first quarter. The score? UConn 21, SMU 2.

That deficit was the game in a nutshell. While the Mustangs would battle back to cut UConn’s lead to 15 in the second quarter, the underpowered SMU squad could do little to change the lopsided affair – little to change the inertia of a Huskies team on a date with destiny. UConn’s 88-48 win over SMU marked the program’s 91st straight game without a loss, setting a new NCAA record for consecutive wins. The old record was also set by the Huskies.

For UConn head coach Geno Auriemma, breaking records is just another day at the office. In his 32nd season with the program, Auriemma’s record as a head coach has swelled to an astounding 970-134, giving him the highest winning percentage of any NCAA basketball coach at the helm of a program for at least 10 seasons. In that stretch, Auriemma has won 11 national championships, including four straight titles and six of the last eight.

Standing in the opposing coach’s box on Saturday, SMU head coach Travis Mays cannot help but glance over at Coach Geno. In his first season as a head coach, Mays aspires to one day turn his program into the heavyweight contender of women’s collegiate basketball.

“What a good team. What a very, very good team,” Mays said of UConn in the postgame press conference. “I heard people say at the beginning of the year that UConn was supposed to have a down year. That’s not a down year. That’s a program that has championship pedigree and the culture is there.”

Mays is no stranger to having a front row seat for UConn’s “championship pedigree.” When Mays served as the associate head coach of the University of Texas’ women’s team, he and the Longhorns were eliminated from the NCAA tournament by the Huskies in back-to-back seasons.

Every loss to the Huskies serves as a crash course in what it takes to win. Mays said UConn’s attention to detail and willingness to go after high-percentage shots is what makes them special.

“[UConn] competes against themselves to be perfect,” Mays said. “And it’s not perfect, it’s just to stay consistent. Playing against the best, we get an example of what we should want to look like.”

Consistent seems like the best word to describe a UConn program that has dominated the landscape of women’s basketball for the past two decades. Coach Auriemma would probably prefer “consistent” over “perfect,” suggesting that his team is not the immovable object everyone perceives it to be.

“We’re not machines,” Auriemma said postgame. “We’re not some piece of technology that you just hit the button and everyday it looks like it did this past Tuesday night. We’re not anywhere near perfect.”

Auriemma was of course referring to last Tuesday’s thrashing of 20th ranked South Florida. The Huskies defeated the Bulls 102-37 in a game that looked like anything but a face-off between two ranked opponents.

“I told the players, ‘look, everything ends, I don’t know one thing that doesn’t,'” Auriemma said. “I remember using the analogy of a wave – I don’t care where it starts. I don’t care if it starts in Portugal, that wave is going to crash on some shore. We just want to be riding it as long as it’s out there.”

The wave analogy also serves as a fitting descriptor of Auriemma’s career. A certain ebb and flow has brought the legendary coach championships, top prospects and countless wins. While his team’s wave could crash at anytime, the wave of Coach Geno’s career might be trailing somewhere around Bermuda by now.

However, the wave of Mays’ coaching career is just now setting sail. Mays said he is glad to have Auriemma in his conference. Just like Coach Geno’s players give his Mustangs an example, Auriemma gives Mays a constant reminder of all the new shores to crash on.

“How can you not be inspired by what he’s doing?” Mays said. “He’s done so much for the game, it’s almost ludicrous when I hear people say, ‘is what UConn’s doing bad for the women’s game?’ How is that even a question? There’s so many things I could look at and hope one day through this process that my program can get to somewhere close to what he’s done.”