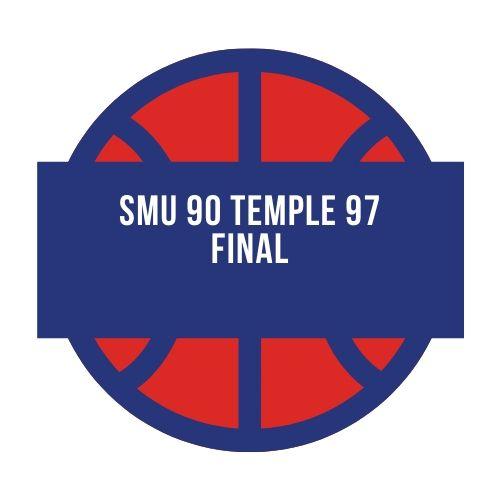 The Mustangs held a strong lead throughout the first half, at one point leading by 19. With no seniors on the roster, SMU’s starting line-up consisted of five transfers: Isiaha Mike, Isiah Jasey, Tyson Jolly, Kendric Davis, and Emmanuel Bandoumel.

The second half had a slower start in scoring for the Mustangs, who only recorded two points in the first four minutes of play. As Temple mounted a comeback, SMU struggled to find the basket.

Then, with only 2:06 left to play, Pierre-Louis tied the game at 72 on two successful free throws. SMU responded with a quick three-pointer by Davis, but it wasn’t enough to hold off the Owls. With one minute to play, Temple took the lead for the first time in the game off a three-pointer by senior Alani Moore II. Three free throws from Jolly evened the score at 80 and sent the game into overtime.

The first four minutes of overtime was a close matchup. Then, with 45 seconds remaining, a foul on Davis sent him to the bench and Temple to the line, allowing the Owls to gain a 93-90 lead. As the clock ran out in overtime, Mustang fouls gave Temple an opportunity for an additional six points from the free throw line. The Owls made four to secure their seven point victory.

Davis led the Mustangs with 23 points and 10 assists while Mike and Jolly added 13 points apiece.

Next up, the Mustangs will host Connecticut on Wednesday night tipping off at 6 p.m.