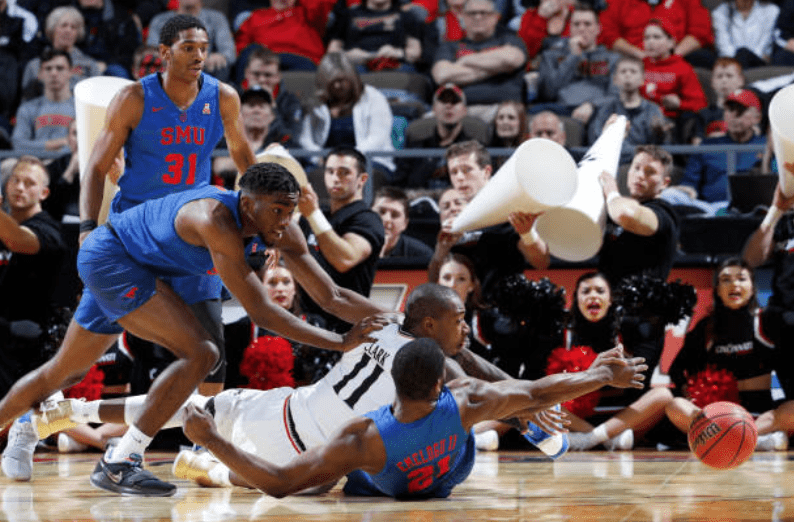 Just days after a tough loss to Tulane in New Orleans, the SMU Mustangs traveled to Cincinnati, hoping to right the ship against one of the AAC’s best teams. Instead, the Mustangs fell flat, struggling all night to a 76-56 loss to the Bearcats Sunday night at BB&T Arena, Cincinnati’s temporary home.

SMU’s offense couldn’t get in a groove against the tight Bearcat defense in the first half. The Mustangs turned the ball over 11 times over the first 20 minutes, leading to extra possessions for the Bearcats, which helped the Bearcats amass a 12-shot advantage. The lead would have been worse if Cincinnati had shot higher than 28 percent from the floor.

The Mustangs did not play the ball well either. They made just six of 20 shots from the floor and two of nine from behind the arc. Their baskets came few and far between, often interrupted by long, scoreless streaks. At one point, the Bearcats were on a 27-4 run.

Also, some of the Mustangs’ best players found themselves in early foul trouble. Ben Emelogu and Ethan Chargois both picked up two fouls early in the game. Emelogu picked up his third foul with just under seven minutes left in the half and sat out for the remainder of the half.

Near the end of the half, SMU battened down the hatches and started to cut into the lead. The Mustangs outscored Cincinnati eight to seven in the final six minutes of the half, going in the locker rooms down 34-20. SMU’s 20 first-half points were its lowest output since 2014.

Things didn’t improve for the Mustangs. Cincinnati maintained its edge in the scoring column as the Mustangs continued to turn the ball over, leading to fast break opportunities for the Bearcats. SMU turned the ball over seven times in the second half and 18 times on the night.

Cincinnati continued to dominate the offensive glass, grabbing 14 offensive rebounds over the course of the game and converting many of those rebounds into second-chance points.

Jahmal McMurray struggled all night, turning the ball over seven times. He finished with only three points on 1-2 shooting.

After sitting out in the Mustangs’ loss against Tulane due to an illness, Chargois didn’t look like his usual self. He fouled out in the second half after only hitting one shot.

SMU finished the night shooting 18-48 from the floor and 6-19 from long range.

The loss was SMU’s worst since a 76-54 drubbing at the hands of Michigan in November 2016.