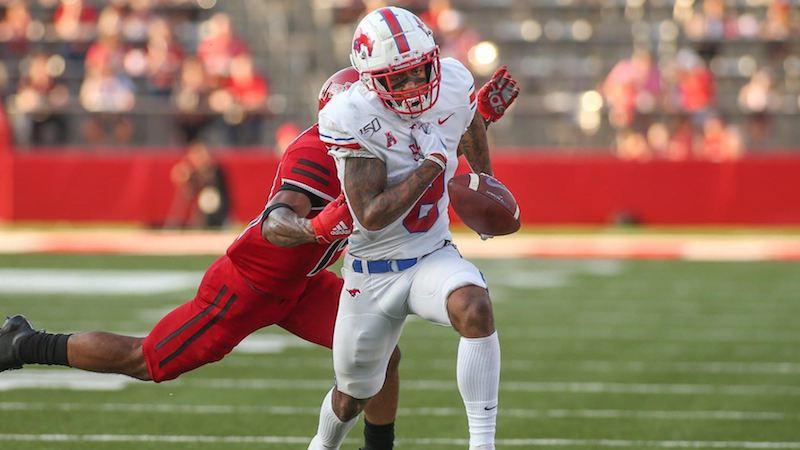 SMU football traveled to Jonesboro, Arkansas, this Saturday for their first matchup of the year against Arkansas State. In Sonny Dykes’ second year as head coach, the Mustangs secured the victory with a final score of 37-30.

University of Texas grad-transfer Shane Buechele had a great night for the Mustangs in his first game as the starter. Before the start of the season, Buechele was named captain by his teammates and clearly has gained trust and respect from them after his debut.

Aside from the first-quarter interception, Shane Buechele looked confident and poised in the pocket in his first game as a Mustang. He completed 30 out of his 49 pass attempts for 360 yards but could not find the end zone. On almost every good drive Buechele put together his receivers could not cross the goal line. In the first half, SMU marched down to the red zone a couple times only to settle with a pair of field goal attempts, one missed. Buechele hit his targets James Proche and Reggie Roberson in the hands on both drives but they couldn’t come down with the football. Neither of the throws were badly thrown, but they were difficult catches to make with the power Buechele used.

A big reason why Arkansas State managed to stay in this game was because of the SMU secondary not making plays. Ar’mani Johnson and UCLA transfer Brandon Stephens got the start at corner, while Rodney Clemons and Trevor Denbow keyed on the quarterback at safety. Denbow was ejected on a targeting call early in the first quarter. He was replaced by true freshman Chace Cromartie who has proven his ability to play at this level during fall camp. The biggest issue in the secondary was one-on-one coverage outside. Johnson gave up uncontested hitch routes constantly as Arkansas State ran a quick-tempo offense. They attempted to go over the top on Stephens multiple times but he consistently played sound out-of-phase defense. Stephens is just three weeks into his transition from running back to corner back, but you could tell, once he gets a complete understanding of his new position, he can do great things for this defense. This is a fast and athletic secondary. They need to look to make plays on the ball.

Going into this first matchup, one of SMU’s biggest problems was depth and experience at offensive line. At times, they opened up some running room for running backs Xavier Jones and Ke’Mon Freeman, but consistency was an issue. When Jones or Freeman made a big run it was usually bounced to the outside because of clutter inside. This offensive line group did alright on pass block, only allowing 2 sacks, but Buechele never had more than a couple seconds to go through his reads.

The defensive line came alive towards the end of the game, but struggled to stop the ball carrier at the line of scrimmage early on. Also, the pass-rush was scarce in the beginning, giving ASU quarterback Logan Bonner plenty of time in the pocket. They were only disruptive on the Red Wolves’ last drive when Delontae Scott grabbed his first sack of the season as time ran out.