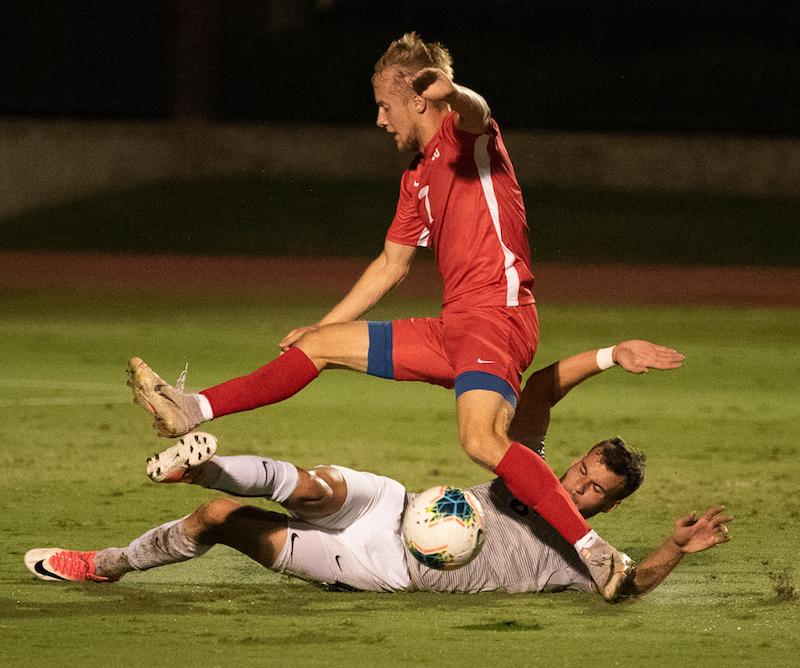 When Gabriel Costa was being enveloped by a sea of blue and red shirts in front of a raucous SMU student section, head coach Kevin Hudson calmly made his to the water cooler. With confetti flying from the stands after Costa’s 83rd minute equalizer, Hudson’s demeanor almost appeared out of place. That is if you do not know who the sixth year head man is. With SMU maintaining its undefeated season with a comeback tie against UCF, this team is still chasing after the 2001 Mustang squad that raced out to 21 games before suffering defeat. On that team, Hudson was a 19-game starter and also a part of SMU soccer’s first Final Four appearance. A veteran of big moments, Hudson isn’t shaken even when the stands quite literally are.

If a team adopts the personality of its coach, the Mustangs mimicked a calm confidence in the face of a 3-1 deficit as late as the 70th minute of the match. The final 20 minutes of regulation, however, showcased something the now 9-0-1 SMU team hasn’t been forced to do all season- mount a comeback. Catalyzed and finished by Costa, who is leading the nation in points per game (1.96), SMU came all the way back and almost buried the Golden Knights in regulation.

Answering the Cal Jennings goal for UCF that came in the 69th minute, Costa only needed 24 seconds to cut the deficit to one. Playing a ball just yards away from the right end line, the sophomore thread the needle through multiple defenders in grey uniforms and somehow found the hands of UCF goalkeeper Yannik Oettl. The junior from Germany however mishandled the shot and could only watch as the ball spun away from his outstretched arms and past the goal line.

13 minutes later, Costa was dancing again with the student section and home bench at his back and split three UCF defenders. In the process, the 5’ 5’’ midfielder was pulled to the ground by Hattabiou Barry, setting up a penalty kick. With his right foot, Costa went to his right on a liner that found the back of the net and tied the game at 3.

“There is nobody else in the league that can make that play. He is a special talent,” Hudson said of his reigning American Athletic Conference offensive player of the week. “He does things with the ball and sees things that other players don’t. There are times in training and in games when you just watch him go and just smile. You say, ‘Thank God I got him on my team.'”

While the 3-3 tie breaks up the nine game win streak to open the season, the result still leaves the undefeated record in tact. In a matchup of two of the top 11 teams in the nation, with UCF coming in ranked as high as nine in one national poll, the tie is certainly not something the Mustangs are scoffing at. The 3-1 comeback in it of itself showed a fighting, physical side of a team that had only trailed for four minutes the entire season coming into Sunday night.

Another aspect of the evening came with the injury to junior Talen Maples. Hudson saw his “steely” leader go down right before watching a UCF goal on the other end. Authoring this comeback with Maples sidelined made the tie all the more impressive.

“I have mixed emotions. Down 3-1 when our physical leader in midfield goes off, if you had asked me at that point if I would have taken 3-3 I would have said yes,” Hudson said. “Once we had all the momentum and the wind behind us… we had chances to win. Overall it was a really good effort from us… I’m proud of the guys.”

Going back to 2018, UCF and SMU were no strangers after meeting in the conference championship a year ago and splitting their two head to head battles. The familiarity was evident in a game that got increasingly chippy. Coming into the evening, both teams ranked in the top 15 in the nation for goals per game, with 3.44 and 2.33 GPG averages for SMU and UCF respectively. The contest played out as one would expect for two high power offenses, featuring 57 combines shots. Garrett McLaughlin lead the Mustangs in shots with six.

Now 9-0-1, SMU will be on the road for a match against USF next Friday. Hudson indicated the next days will be both a mixture of recovery and growth.

“We have to learn. We will have to recover that was a hard game and we covered a lot of ground. I haven’t seen the numbers yet but I assume the load was really high. Tomorrow we will take off because we need to but be back at it Tuesday,” Hudson said.