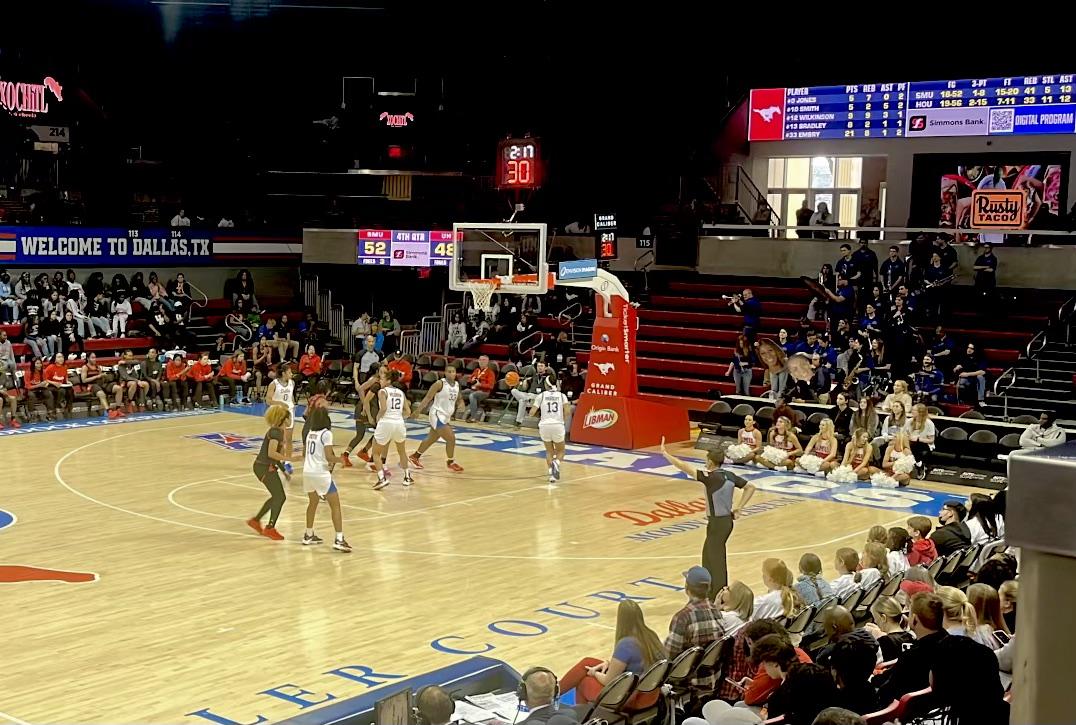 The Mustangs fought the Houston Cougars in a tooth-and-nail battle on the court in Moody Coliseum Saturday afternoon, resulting in a thrilling game: a Mustang win of 53-50, and a lot of praise for the courtside hustle of 6’1” SMU forward, Chantae Embry.

The game began with an impressive Cougar lead, with Houston ahead of the Mustangs 17-11 at the end of the first quarter.

Though the Mustangs struggled with shooting and defensive maneuvers in the first two quarters, many star players allowed the team to remain strong against Houston.

“They had a couple mistakes in the first half, but it was an exciting game,” Johnson said.

By halftime, the Mustangs trailed slighted by four points behind an aggressive and goal-oriented first-half Houston team and left the court 28-24.

The Mustangs gave the crowd a show, sprinkling in a bit of Moody Magic on the hardwood. Special guests from multiple community programs focused on involving young women in basketball sat in the stands watching the Mustangs play at Saturday’s home game.

The last two quarters showed drastic improvement from the Mustangs, as the team nearly doubled their field goal percentage from 23.5% in the second quarter to 50% in the third.

SMU forward Jasmine Smith scored a shot clock buzzer beater layup at the top of the third quarter that amplified the energy of an overwhelmingly pro-Mustang crowd. This tied the Mustangs and Cougars at 28-28.

Houston forward Bria Patterson and guard Tiara Young made sure to let the Mustangs know their battle was far from over. Young is one of Houston’s highest scorers, shooting an average of 80% sunken shots from the free-throw line in this game alone.

Amid the high-energy back-and-forth scoring, both teams had room for improvement in the fourth quarter. There were turnovers and a long list of personal, rather than team, fouls from both Houston and SMU.

Houston spent the fourth quarter trying to cling to their American conference reputation as a highly competitive team and keeping the game tied for a bit until Houston forward Kamryn Jones fouled, bringing SMU forward Savannah Wilkinson to the free-throw line.

With only 15 seconds left in the 4th quarter, SMU’s Wilkinson scored 1 point on a free throw from Jones’ foul that gave the Mustangs a three-point lead over the Cougars, 53-50. Houston, now out of time, had no chance to catch up. The close final score was solidified by both Wilkinson’s free throw and an impressive assist from Embry minutes earlier.

“[The Mustangs] need to work on offense because I felt like the score could have been higher,” said spectator Sheri Graves-Deaver.

To see how the rest of the season unfolds for the Mustangs, be sure to attend the next home women’s basketball game against USF on Saturday, Feb. 4 in Moody Coliseum. Tickets are $10 online, or free with a valid SMU student ID.