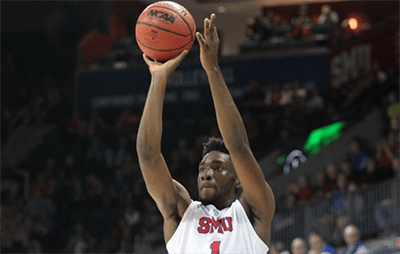 With 7:23 left in the first half, Connecticut forward Vance Jackson drove the lane for an easy layup. Out of nowhere, SMU guard Jarrey Foster flew up and swatted the ball into the front row, crashing Jackson to the hardwood. The sold out Moody Coliseum crowd shot to its feet and let out one of the loudest pops of the season.

The image of Foster towering over the floored Jackson serves as a fitting reminder of how UConn has fared in Moody during the past few seasons.

When SMU opened its newly renovated homecourt in 2014, the Mustangs entered as the underdog against a Huskies squad ranked 17th in the nation. Not so after all, as SMU gave itself a housewarming gift in the form of a 74-65 win over a UConn team that would go on to win the national championship.

That win included, the Mustangs have posted a 5-2 record against the Huskies in the past three seasons with three of those wins coming at home. SMU’s 69-49 win over UConn on Thursday night pushed that record to 6-2, further adding to a winning tradition few saw coming four years ago.

Not only is SMU’s home record against UConn amazing, but also the dominating fashion in which the wins have come. The Mustangs have led the Huskies in the scoring margin at home by an astounding 73 points in that span.

Defense was key in SMU’s latest win over UConn, with the Mustangs holding the Huskies’ top producers to five points combined. SMU held the Huskies to only 15 points in the first half, the fewest points the Mustangs have allowed in the opening frame this season.

SMU guard Shake Milton said taking Brimah out of the game was a goal in practices this week. Brimah, one of the top shot-blockers in the nation, is a well-known threat on both ends of the floor.

“Coach basically just told us whenever we’re driving, look to kick,” Milton said postgame. “If we can’t, try to show him the ball and pick up fouls. It really doesn’t make sense to go and try to shoot a one-legged layup on a 7-foot shot-blocker.”

UConn shot only 34 percent from the field and 32 percent from three-point range. On top of a poor shooting night, 16 Huskies turnovers led to 18 points for the Mustangs, virtually putting the game out of reach for UConn.

The Huskies entered the game in the top half of the conference in defensive efficiency, but some impressive individual performances by the Mustangs had UConn scrambling.

Shake Milton led SMU in scoring with a season high 23 points, five rebounds and six assists. Milton shot 50 percent (8-for-16) from the field and 56 percent (5-for-9) from three-point range.

Ben Moore finished with the Mustangs’ only double-double, adding 14 points, 13 rebounds, three steals and two blocks. Moore played an elite defensive game, holding fast against a UConn team that scores a majority of its points inside.

Forward Semi Ojeleye gave another fantastic effort, finishing with 17 points and six rebounds for his 19th double-digit scoring performance of the season. Ojeleye had a scare in the second half when he injured a finger on his shooting hand, requiring him to head to the locker room for care. Ojeleye would return and finished the game with some fingers taped.

“He’s a tough guy,” Milton said. “I really wasn’t too worried about him. He could run through a wall. I feel like nothing is going to really hurt him, he’ll be fine.”

With a tough test coming up against Houston on Saturday, Moore said SMU can only worry about what it can control. Playing hard is the only focus for the Mustangs right now.