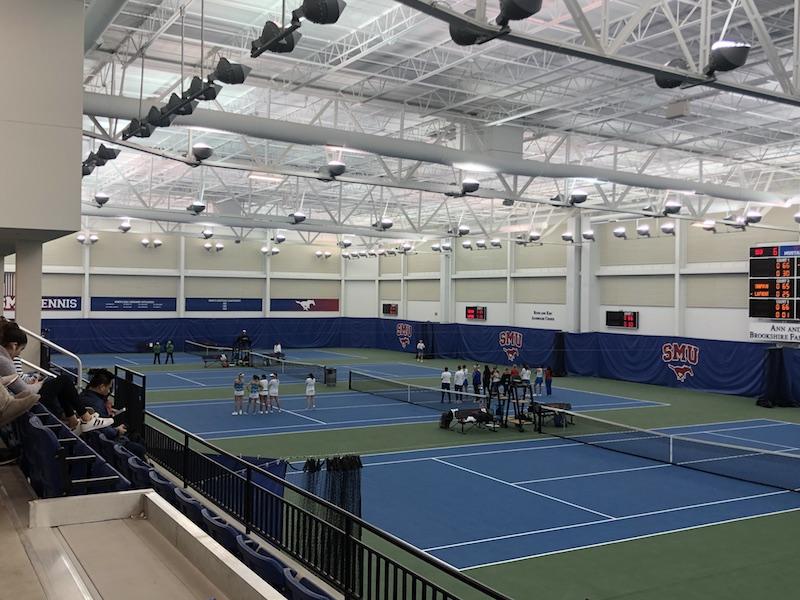 With the first American Athletic Conference match of the season, the Mustangs rallied to improve their season record to 4-3. Tulane continued their six-game losing streak, falling to 4-6 overall.

As for singles, Perez-Lopez continued her winning streak with an easy 6-0, 6-2 win over Christina Sisti on Court 4. The Mustangs continued their domination with wins for Traxler and Kulicke on Courts 2 and 5.

Liza Buss, last week’s AAC Player of the Week, and freshman Katherine Jakeway also recorded wins at No. 1 and No. 6 singles. SMU finished off the day with senior Anzhelika Shapovalova winning 6-2, 7-5 on Court 3.

“Our season is going great. We took a few tough losses on the front-end, but I think we’re getting better and better and that’s what matters,” head coach Kati Gyulai said.

Sophomore Nicole Petchey was very proud of her team’s performance despite being unable to play in Sunday’s match.

“I think the team did really well in picking up their energy after winning the doubles point and everyone started off their singles matches really strong,” Petchey said. “It was an important win for us too because it was our first conference match that we played and it’s good to see that our hard work has been paying off.”

As for the rest of the season, the Mustangs are aiming high. “We want to be top 25 and win the American Athletic Conference Championship,” Gyulai said. “We have five seniors in our lineup which certainly helps in terms of experience, in terms of them knowing what needs to be done. They’re the ones who that help us advance [and] strengthen our culture, so that has been very good.”

Regarding the Mustang’s biggest obstacle this season, the key is consistency. “Maybe a little bit of challenge for us is being more consistent at number 6 in the lineup,” Gyulai said.

The Mustangs will face their next set of challenges this Thursday, Feb. 21 at noon at Kansas State and Friday, Feb. 22 at 1 p.m. at Wichita State.