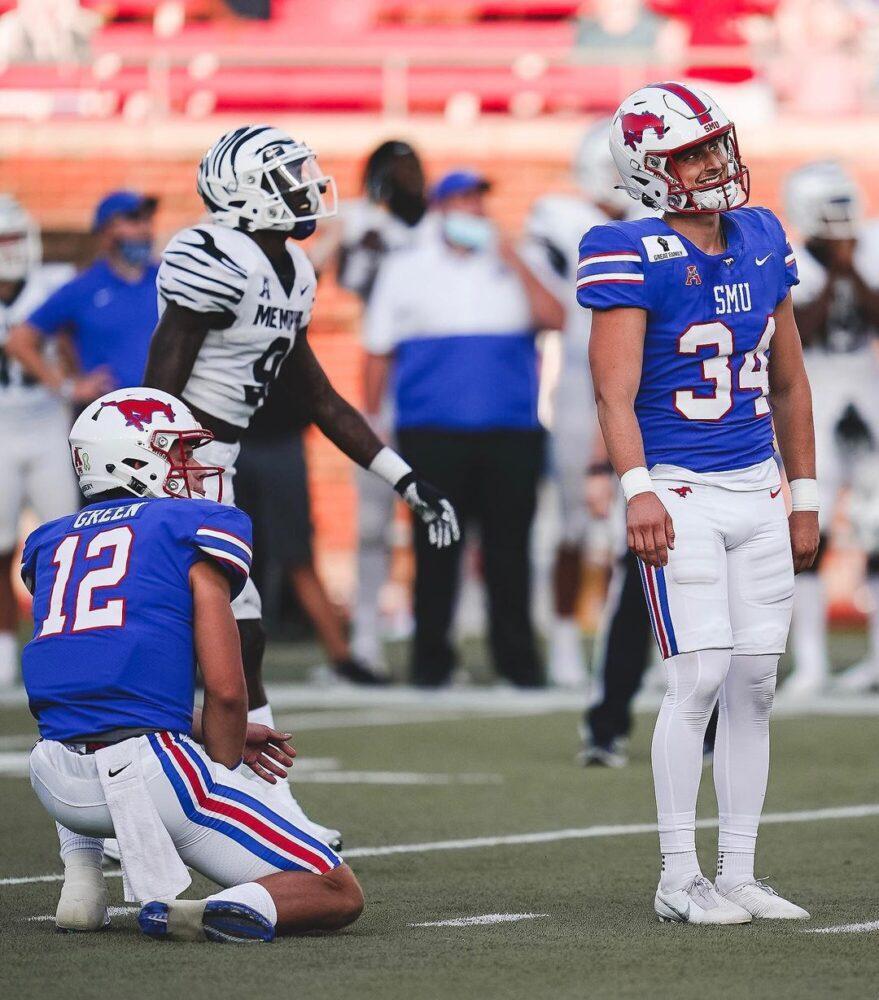 UNIVERSITY PARK, Texas — Memphis had the 21-point comeback all but sealed. Brady White had finally completed the throw he had missed all day — a 32-yard seam route to Calvin Austin III — and the stage was set for a game-winning field goal. The final 1:22 were supposed to be a formality.

And then a Junior Aho play changed everything.

In the span of 68 seconds, Aho poked the ball out of White’s hands and watched as Elijah Chatman fell on it. On the ensuing snap, Ulysses Bentley IV broke free for a 14-yard scamper into Memphis territory. The frantic sequence ended with Austin Upshaw lunging to position Chris Naggar’s walk-off, 43-yard field goal.

With nine seconds on the clock, Naggar kicked SMU to a 30-27 win over a ranked Memphis team.

For what was easily Naggar’s biggest moment as a college player, after transferring to SMU this summer, the meaning for the program at large cannot be overstated . A year ago, SMU faltered at Memphis in large part due to special teams miscues. A 43-yard field goal was all but out of the question. This year, there was no doubt.

It is now the difference between a 4-0 start, a win over the defending conference champions and a firm hold of first place in the conference.

“It felt really good to be able to have confidence in the kicker. When you look at the difference between last year’s and this year’s game, it really comes down the to the kicker,” Sonny Dykes said.

“You know, we knew how big of a game this was. They are the reigning champs in our conference and if you want to win the league, you have to win games like this,” he added.

This game itself was erratic. SMU raced out to a 24-3 lead by late in the second quarter but couldn’t maintain the advantage. The hosts posted 205 yards of offense in the first quarter alone, included two home run touchdowns to Reggie Roberson Jr., and then entire parts of the offense fell off.

T.J. McDaniel suffered a left leg injury on the first play of the game. Later on, Roberson Jr. pulled up on a 43-yard sprint grabbing at his knee. It knocked out two of SMU’s most productive starters — Roberson finished with 243 yards receiving — and the momentum gradually faded away.

“You hate to see that, with the game that he was having, and just the season he was going to have. I don’t know the severity of his injury,” Shane Buechele said after the game on Roberson’s injury.

Memphis closed the gap with a 24-3 run of its own to tie the game at 27 with 2:53 in the third quarter. The Tigers’ offense, which looked the part of a team that had not played in 28 days due to COVID, settled in.

Damonte Coxie methodically hauled in eight catches for 169 yards. Sean Dykes and Austin III answered with two receiving touchdowns and Memphis was poised to complete the comeback until the final sequence.

SMU stayed afloat without its main cast in large part due to Buechele’s day. Throwing for 474 yards and three touchdowns, it was the senior who made plays down the stretch to clinch SMU’s biggest win of the season.

With Bentley IV struggling to find running room, finishing with 32 yards on 13 carries, Buechele relied on Kylen Granson and Upshaw to make plays. It was Naggar, though, who defined the day.

“You know, when I came on my visit the coaches told me that they needed help on special teams. I wasn’t here, but I watched film of the Memphis game,” Naggar said. “I’m glad I could do my part.”