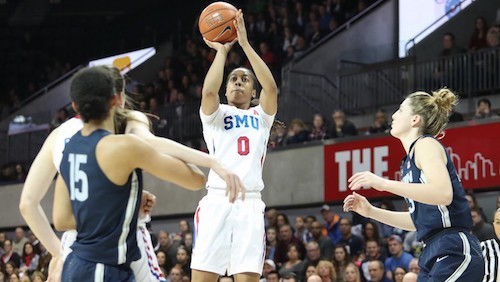 No. 1 ranked UConn will strive to win 100-straight games in tomorrow night’s game against No. 6 ranked South Carolina. UConn picked up their 99th win Saturday afternoon in their game against SMU.

After a close first quarter, UConn expanded their lead over SMU and continued to widen the gap. The Huskies outscored the Mustangs 22-8 in the second quarter and finished the half with a 44-22 lead.

The Huskies consistently scored 22 points in each of the first three quarters and wrapped up the game with 17 points in the fourth. The Huskies ultimately defeated the Mustangs 83-41.

Next up, the Mustangs will be on the road Wednesday for their game against Temple at 6 p.m.