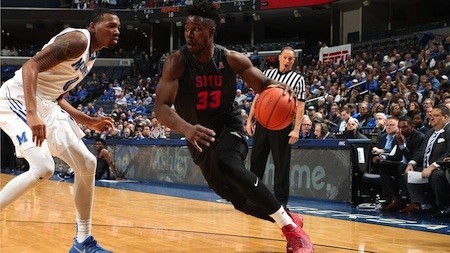 Both in their first season as player and head coach with the Mustangs, Semi Ojeleye and Tim Jankovich earned high praise from AAC coaches in the form of top honors.

Ojeleye, who entered the season as one of the top, yet unknown players in the country, was voted AAC Player of the Year. Ojeleye led SMU in scoring during the regular season, averaging 18.5 points per game. He also scored in double figures in all but one game.

Ojeleye helped lead @SMUBasketball to The American regular-season title, averaging 18.5 points per game while shooting over 43 % from 3-pt pic.twitter.com/OtQ8P8nZbA

His POY honor gives the Mustangs three straight wins in the category, with former SMU point guard Nic Moore winning the award in seasons prior.

Earlier this week, Ojeleye was also named to the AAC All-Conference First Team and to the USBWA All-District VII team.

The junior forward was also recognized for his superior performance in the classroom. Ojeleye, who majors in psychology and carries the academic standing of a senior, also won AAC Scholar-Athlete of the Year days after being named an Academic All-American.

After amassing a 36-4 record through his first 40 games as head coach, Tim Jankovich earned AAC Coach of the Year honors. He coached SMU to a 9-0 record during Larry Brown’s NCAA suspension last season and led a team with only seven scholarship players to a conference title and AP Top 25 ranking.

Jankovich was named one of the 10 semifinalists for the Naismith Men’s College Coach of the Year award last week.

Ojeleye and Jankovich were not the only winners from SMU. Junior guard Ben Emelogu was named AAC co-Sixth Man of the Year on Wednesday. Ben Moore, Sterling Brown and Shake Milton were also named to the AAC All-Conference Second Team.