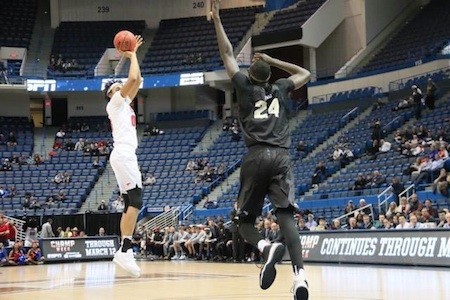 HARTFORD, Conn. — When the final buzzer of No. 12 SMU’s AAC Tournament semifinal game against Central Florida hit, Mustangs fans everywhere could let out a sigh of relief.

24 hours earlier, SMU avoided what would have been a disastrous start to its postseason campaign, holding off an East Carolina team that rallied from a 22-point deficit to tie the game with 57 seconds remaining.

Thanks to a game-high 36 point performance by junior forward Semi Ojeleye, the Mustangs pulled out the win, earning the right to play another game and another night at the plushy Hilton adjacent to the XL Center.

Because it proved SMU’s showing on Friday was a fluke.

The Mustangs’ near collapse in their first game went against the expectations of almost everyone. SMU had easily handled East Carolina twice this season by a combined 71 point margin. When the Pirates got past Temple in the first round, many thought a semifinal appearance for the Mustangs was a shoe-in.

That expectation combined with 13 made East Carolina three-pointers almost resulted in heartbreak.

Was it carelessness? Was it overconfidence? Or did SMU just not have it that day?

Maybe none of those. Maybe some of each. Regardless, it happened. When Central Florida ran up the score on Memphis in its quarterfinal, Mustangs fans had reason to be nervous.

But SMU took care of business, scoring 44 points in the second half to secure a 70-59 win over Central Florida and clinch a birth in the AAC Tournament finals. Sophomore guard Shake Milton scored 14 of his 16 points in the second frame and senior Sterling Brown added a game-high 22 points while shutting down the Knights’ Matt Williams on defense.

It was just another example of what the Mustangs do best: respond.

“You know, we played very well yesterday for 34 minutes or so, and then really had a rough ending,” SMU head coach Tim Jankovich said in the postgame press conference, referring to Friday’s quarterfinal. “So to bounce back from that and really look like the team we’ve seen all year? I’m really proud and happy for them.”

The win was the Mustangs’ 29th on the season, making this team the winningest in program history. Jankovich said he is not surprised by that fact given how his team plays.

“There’s a lot of sacrifice and giving and unselfishness that goes into being a great team,” Jankovich said.

Jankovich believes SMU plays with a mindset uncommon in college basketball today, one where players favor winning at all costs over trying to be the star.

“They are a little bit throwback,” Jankovich said. “They are a joy to coach.”

The Mustangs looked like their normal selves against Central Florida. 1 seeded SMU may not have walked to the tournament final like some expected, but will play for the championship on Sunday.

Meanwhile, on the other side of the bracket, another conference favorite sustained through absolute chaos.

Cincinnati, who split the season series with SMU, advanced in its semifinal to meet the Mustangs once more for the tournament championship. Getting there was not a cakewalk.

After quietly discarding Tulsa in the quarterfinals 80-61, the 2 seeded Bearcats were matched up with Connecticut, a familiar foe who had defeated Cincinnati in three straight conference tournaments. A volatile Hartford crowd that had already powered a 6 seeded and injury plagued Huskies squad past South Florida and Houston descended on the Bearcats with a riot mentality.

Foul trouble cost Connecticut heavily, forcing Jalen Adams and Kentan Facey to ride the bench for a portion of the first half. That bought Cincinnati enough time to build just enough of a lead to walk out of the building in one piece.

Both SMU and Cincinnati faced adversity from teams that finished the regular season below .500 (East Carolina: 14-17, Connecticut: 14-16). The Mustangs withstood a barrage of threes, the Bearcats won a game of 5-on-12,005.

The two best teams in the conference get to battle for a championship, and that is how it should be.

The main event of American Athletic Conference play in 2017 has been booked well, pitting the perennial favorite of the season against a team that was once an afterthought – a team that won the regular season championship with only seven scholarship players.

The title of “best team in the AAC” would not only depend on who you asked, but when you asked. Cincinnati was ranked in the Associated Press Top 25 Poll by the second week of the season, when SMU received one measly vote. Jankovich was more than willing to joke with an AP reporter who asked about the team’s previous off the radar status, attributing it to, “bad voting.”

Fast forward to now: the Mustangs are ranked three spots ahead of the Bearcats. SMU also finished the regular season six spots higher than Cincinnati in the KenPom ratings.

Sunday’s game will not decide the better team, but will rather reaffirm that this is the ending to AAC play we knew should have happened. Now we get it.

Jankovich respects the moment, knowing the special effort it took to get here and the effort it will take to bring another trophy back to Dallas.

“Here we’re working on such short numbers,” Jankovich said. “If we were fortunate enough, which we are, to play three games in three nights, I felt like this could be as hard as anything we’ll do all year. We’re going to have a great opponent in the championship game. It’s a huge challenge.”