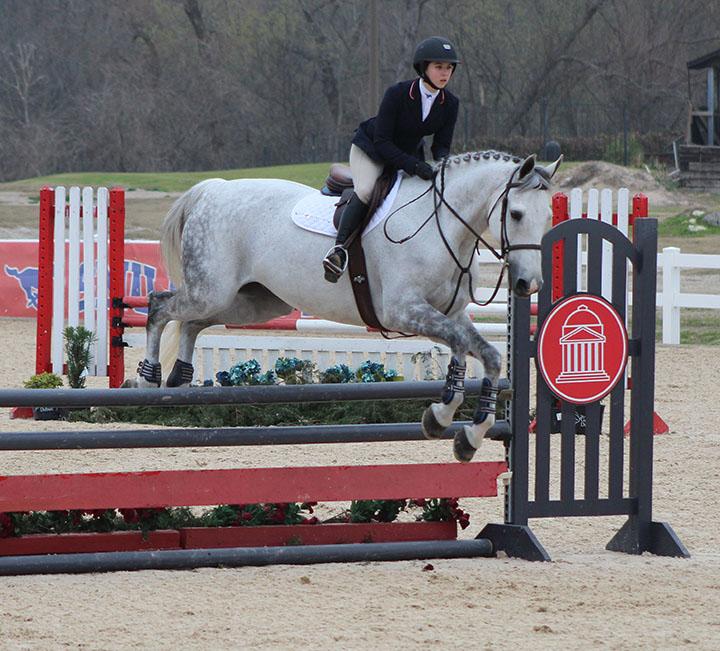 Auburn started the competition by taking a 4-1 lead over SMU in Equitation over Fences. Auburn riders Caitlin Boyle, with a score of 86, and Hayley Iannotti, with a score of 85, added two points to their team’s total before Devin Seek pulled a point for SMU with her score of 86. Auburn concluded the event with an additional two points.

SMU tied 2-2 with Auburn in Horsemanship. The two teams went back and forth until Haylee Schoonover and Auburn’s Taylor Searles both concluded the event with scores of 72.5.

“I looked at it as I have nothing to lose going into it,” said freshman Megan Waldron, who competed in Horsemanship. “My goal was not only to have a clean pattern, but to be as aggressive as I could be, and just do my part to help my team win.”

SMU dropped four points to Auburn in Equitation on the Flat. After the two runs, Nora Grey added a point to SMU’s total with a score of 83. Vivian Yowan was granted a re-ride on Clover, and she got another point for SMU with her score of 84.

“When I get a re-ride, I feel like it’s almost like a time for redemption,” Yowan said. “I just had that fire in me that I needed to win this.”

SMU made a comeback in Reigning, scoring 3-1 over Auburn. Jill Pfisthner started the event by pulling a point for SMU with a score of 71.5. Then, Madison Steed earned her M.O.P honor for the highest score in the event, 73.0, over Auburn’s Terri-June Granger, who scored a 72.5. Holly Lansidel’s score of 71.5 added the final point to for SMU.

The team recognized and celebrated its graduating seniors last weekend.

“When I first came on this team as a freshman, the team was nothing like this,” Yowan said. “Because of the seniors, the team has grown tremendously, and it’s going in the right direction; we’re only going to get better from here.”

Parents attended this last home competition to join the team in celebrating the seniors.

“All these girls have the opportunity to climb, and it’s a great opportunity to continue with Equestrian,” said Camee Schoonover, mother of senior Haylee Schoonover. “I’m so glad that SMU has this program that my daughter was able to participate in.”