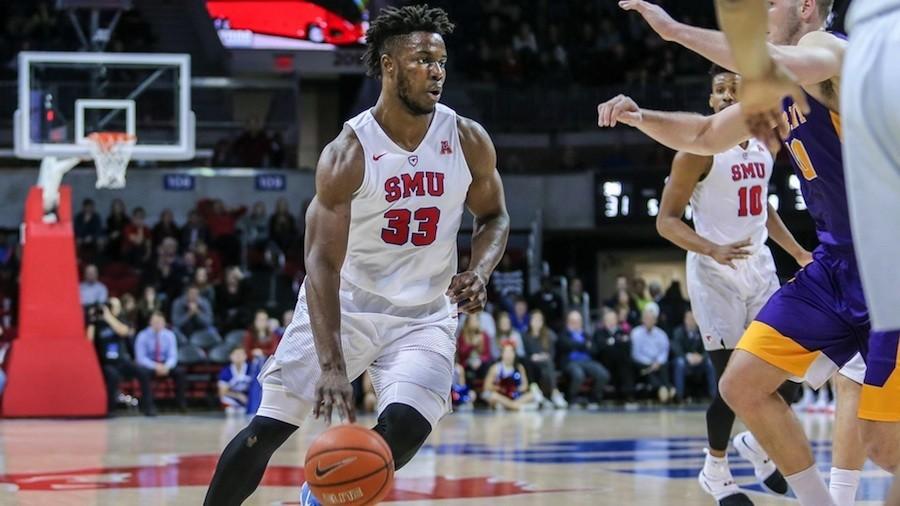 With 22 seconds left in the first half, Albany’s David Nichols hit a jump shot to put the Great Danes up 32-31. Not wanting to go into the locker room behind, SMU pushed the ball up the court with the shot clock already off. With just four seconds left, Jarrey Foster found an open Semi Ojeleye, who sunk a three to put SMU up two at halftime.

Ojeleye’s three before the buzzer was his fourth of the night. The Duke transfer scored 17 points before the half, taking care of the offense himself on a night when the Mustangs struggled to create space between themselves and a game Albany team. Ojeleye scored 50 percent of SMU’s first half points by himself, the most by a Mustang in an opening half this season.

“I just love guys that are so passionate about their craft,” Jankovich said in the postgame press conference. “Semi spends as much time in the gym, I can’t imagine there’s anyone in the country that spends more time away from practice working on his game. That’s near and dear to my heart.”

Ojeleye was not satisfied with just 17. He scored 11 more in the second half, finishing the night with 28 points and five rebounds. It was Ojeleye’s 13th double-digit scoring performance of the season and fifth game in which he scored 20 or more points.

“Everybody was finding me,” Ojeleye said postgame. “We find anybody that has a hot hand at the moment, and it happened to be me tonight.”

SMU’s starters did most of the heavy lifting in the Mustangs’ 71-53 win over Albany. SMU scored only six points off the bench. Four of the Mustangs’ starters scored in double figures.

Sterling Brown, who had the hot hand in SMU’s win over Stanford on Monday, had another great shooting night. Brown finished with 12 points despite playing the fewest minutes of the starting five, sitting out much of the first half after picking up his second foul early. Shake Milton hit key shots in big moments to keep SMU ahead, finishing with 10 points.

Jarrey Foster finished a rebound short of a double-double and also scored 10 points. SMU found itself in a scary moment when Foster slid across the floor after being tripped up on a fast break five minutes into the second half. He was able to walk to the locker room and did return to the game, but had to play through some knee pain.

“Everybody kind of holds their breath when anybody goes down and holds their knee or ankle like that,” Ojeleye said.

With such a young, short bench, how did Jankovich react when Foster went down?

“Just hyperventilating,” Jankovich said. “So if you ever see the brown bag come out, I’m breathing in the brown bag.”

Senior forward Ben Moore was the only SMU starter to not score in double figures. Moore finished with five points, seven rebounds and four assists. Moore was scoreless in the first half after not taking a shot from the field, but played one of his better defensive games of the year.

“I just want to win, that’s the biggest thing with me,” Moore said postgame. “I’ll do whatever it takes to win.”

Jankovich was quick to praise the senior for wanting to play the night after he required multiple stitches to close a cut on his lip.

“It wasn’t even a question he’s going to play,” Jankovich said. “I just think it speaks to him. I love him. He and Sterling as seniors, it’s so hard to think about the day when they’re not here.”

SMU will enter American Athletic Conference play on a six-game winning streak with a 10-3 record. Jankovich said that despite early losses on the road, he and the team are figuring out the formula to be successful. With a month to focus on basketball before spring classes begin, everything might be coming together at just the right moment.

“For a game to leave campus for a few days, have a break and enjoy some early Christmas, this could not have been a better situation,” Jankovich said. “I’m really proud of our guys.”