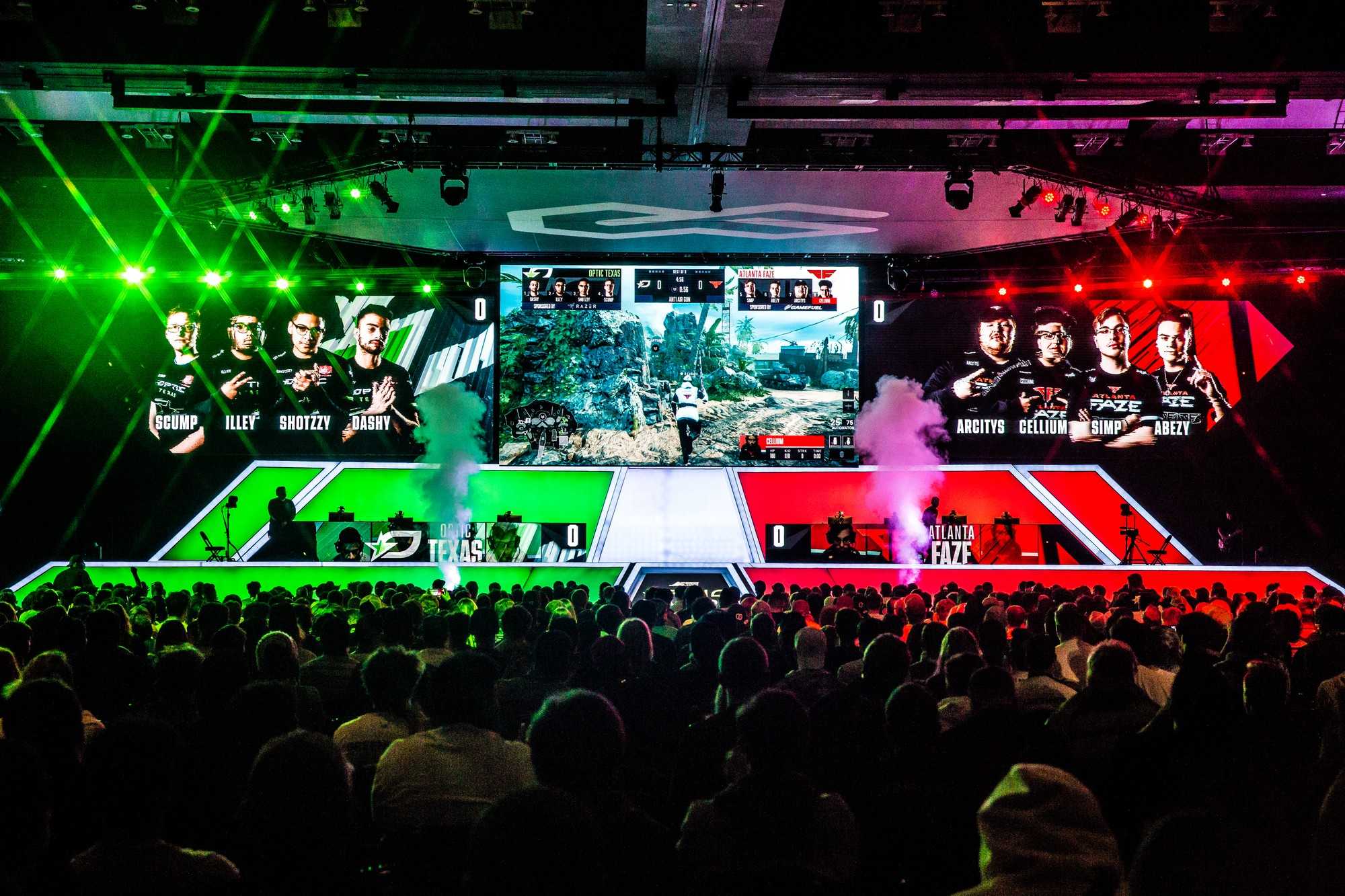 ARLINGTON – After days and nights of practicing for both OpTic Texas and Atlanta FaZe, OpTic player Seth “Scump” Abner says that his team’s work finally paid off.

Playing in Call of Duty’s first major of the season in Esports Stadium Arlington, OpTic faced FaZe in Day 3 and Day 4 of the Major. The streak between the two Call of Duty esports giants ended Sunday evening after the DFW-based team, OpTic Texas, secured the first games of the season for Call of Duty League. While defeating one of the best teams in the scene, OpTic claimed their victory against Faze while taking home a prize pool of $200,000 from the Major I League Esports Tournament.

“Seeing OpTic and FaZe verse each other after not playing against each other for years is nostalgic to me” said an attendee. The OpTic v. FaZe rivalry reoccured on both March 5, 2022 and March 6, 2022, rallying in over 1 million views on the COD League YouTube channel for the days OpTic went against FaZe.

The floor shook as fans clapped, stomped, and cheered for their favorite team. Separated by green (OpTic) and red (FaZe), each member of the audience took their role in supporting their favorite team of the night. The chants of “Let’s Go OpTic,” ricocheted from the left side of the stage, bouncing throughout each corner of the stadium. There was not a single moment of silence for Team OpTic.

Many fans in the stadium booed FaZe as they walked out, ready to play on stage, and even chanted “overrated.”

OpTic did not begin the game expecting to win. FaZe won over two rounds over OpTic. However, the crowd kept the enthusiasm running. The “Greenwall,” what OpTic calls their followers, cheered every time “Scump” got a kill – even when OpTic was down in points. Despite OpTic down 0-2 against FaZe, the team eventually managed to tie up the points with FaZe, bringing the score to 2-2.

President of Optic Gaming came out to the ground floor as tension started to rise. With the crowd roaring in excitement during each stage of the game, it was seen that the noise was effecting the gameplay of the match.

“It is your duty as a brick (what they call their fanbase) to tell the other bricks to shhhh…” said Hector “Hecz” Rodriguez.

Afterward, “Hecz” pulled out a signed gold badge and handed it to a fan in the crowd.

OpTic and FaZe came back on the stage after a short intermission. Determining it all for Saturday night’s semi final winner’s bracket, OpTic managed to take on 6 straight rounds of Search and Destroy on Tuscan, bringing the team to victory with a final score of 3-2, reverse sweeping FaZe and giving them their first loss of the season.

“I’m just so proud of these guys, and to come out and reverse sweep phase, I mean – that’s what feels great” said “Scump” in an on-stage interview.

After FaZe won their bracket against the London Royal Ravens, OpTic and FaZe faced a highly anticipated yet unexpected rematch for the finale of the Major.

OpTic started the finals with a win on Gavutu Hardpoint going 250-130 against FaZe. The nerves began to rise as FaZe won their Search and Destroy game on Desert Siege, coming to a close 6-5 lead for Faze. Moving into the third game that would break the 1-1 tie, OpTic secured the round, but had to rematch a round of control due to FaZe player, Alec “Arcitys” Sanderson, experiencing PC issues that caused the player to lag. After all technical issues were solved, OpTic reassured the round with a win.

After a 5-2 victory over Atlanta FaZe, OpTic Texas is seen as one of the best Call of Duty teams in the world. Ranked as the No. 4 team in Call of Duty League, each player on the team, Seth “Scump” Abner, Brandon “Dashy” Otell, Anthony “Shotzzy” Cuevas-Castro and Indervir “iLLeY” Dhaliwal played their part in advancing through the winner’s bracket, and facing Atlanta Faze once more in the league. Player, iLLeY clutched up many rounds and landed an outstanding performance for his team while MVP of the season, “Dashy,” states that he “likes [his] chips with the dip,” referring to OpTic’s win with his fellow teammates.

OpTic led an unstoppable season that had fans cheering the team on from start to finish. The player’s earned every bit of the season and were determined to get the win – and so they proved everyone right.

With everyone in the audience standing up from their seats and running towards the stage wavering their “GreenWall” flags in the air, the team settled in for a post-game interview on-stage.

“The work we’ve been putting in has shown and this is only the beginning. We’re going to keep working hard every single day, we’re not going to be complacent. We’re doing this every single year!” said “iLLey.”

“I’m on top of the world right now. This team has worked so-so hard, day in and day out, always improving” said Scump.

Going into Dashy’s portion of the interview, the crowd began to chant “MVP,” with his mother cheering him on in the crowd.

Leaving the stadium after celebrating a 5-2 victory in the Major I Championships, the post-game aura had an undisturbed, harmonious and compelling feeling to OpTic Texas’s player room. With Indervir “iLLey” Dhaliwal lying on the couch and Brandon “Dashy” Otell sitting beside him, Anthony “Shotzzy” Cuevas-Castro roams the room with a gleaming smile on his face, while Seth “Scump” Abner and the OpTic team reflects on the victorious experience of winning the championships. Head Coach of OpTic, Ray “Rambo ”sits by his wife exchanging a conversation while the President of OpTic, Hector “Hecz” Rodriguez, walks into the room holding a camera towards his face.

In the room sat many excited members of Team OpTic. Each and every person was calm, as if the team had not just won a Championship and were declared one of the best Call of Duty teams in the world.

The crowd’s synergy plays a tremendous role in garnering the spirits for the hometown players in OpTic. “After you get kills and you hear the crowd roar, it just gets you in the zone” said “iLLey.” “Having a crowd like this behind you is just amazing. There’s no real feeling when you pop a two-piece, and the crowd goes crazy. You just start feeling yourself.” said “Shotzzy.”

One of “iLLey’s” favorite plays that highlighted Sunday’s championship match was his three-piece on Gavutu. Meanwhile, “Shotzzy’s” wallbang play on the winning point of Berlin S&D was a highlighted moment for those watching and the player himself. “Shotzzy” hits a remarkable play during the game winning point for OpTic. “I went top-third and was wallbanging until I got the pick. Seeing how it played out and imagined was really cool” says “Shottzy.”

Wrapping up the championships in their white OpTic hoodies and sandals, “Scump” says that “the talent is definitely up there with those teams. I would say the biggest difference between our teams and those teams is we just work way hard. We make sure everything is smoothed over, and nothing is left to chance.”

The star player reminisced on a tweet that he had said: “There has got to be light at the end of this,” and with that tweet, “Scump” and the OpTic team found themselves in the light, winning the Call of Duty Major I Championships.