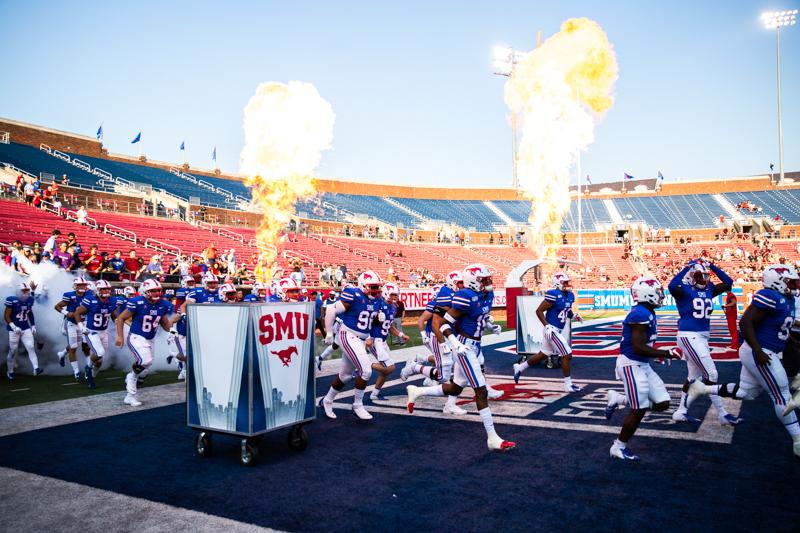 Editor’s note: The student-athletes in this story asked not to be named due to the sensitivity of their comments and potential repercussions for speaking out.

As SMU’s athletic department begins the process of bringing back 75 student-athletes to campus, several returnees are voicing concerns over their safety.

Four SMU football players, who chose to remain anonymous out of fear for the repercussions of talking publicly, spoke with The Daily Campus about the COVID-19 liability waivers and “inadequate” safety protocol measures.

SMU required all players to sign a document titled the “Acknowledgement of Risk for Covid-19 Summer 2020” by Wednesday, the first of three possible return days to voluntary workouts for student-athletes.

The form was aimed at absolving the university of potential legal risk for those who contract the virus while going through summer workouts. The document was first reported by Sam Blum of The Dallas Morning News and was later confirmed by three student-athletes, across two sports, by The Daily Campus.

“As we developed our plan for student-athletes to safely return to campus and resume voluntary activities, we consulted with an array of internal and external colleagues,” Athletic Director Rick Hart told The Daily Campus in a prepared statement. “The inclusion of an acknowledgement form emerged as a best practice among peer athletics programs, as well as other organizations and facilities such as schools, gyms and daycares.”

One SMU football player indicated that he was unaware that players would be asked to sign a document when they returned to campus. He added that signing the electronic form made him feel “uneasy” and only heightened the concerns he held prior to reporting for preseason camp.

“When you sign a document like that you feel scared for your safety for sure,” the football player said.

The same player said he did not feel pressured to sign the form, but he was unaware of anyone who elected not to sign.

SMU has stated that the document was circulated to student-athletes on Friday, when the wording of the document was finalized. SMU athletics also indicated that athletes who return on July 6 and July 13 will have more time to review the document before returning to campus.

“Our intent in providing the document is to confirm that our student-athletes acknowledge that there is risk associated with co-existing with a pandemic, particularly since they will be operating under our protocols for only a short period of time each day during this voluntary summer workout period,” Hart said in a prepared statement. “Our intent is also to make clear that if, for any reason, a student-athlete is not comfortable participating in activities at this time, it will not impact their eligibility or their scholarship status.”

There is an option on the document for student-athletes to decline to return to campus and instead file for a medical hardship or medical exemption. Right after, the document states that scholarships will be unaffected for those who “have concerns regarding the COVID-19 virus.”

Other student-athletes have held issues with the health protocols that SMU has put in place to keep student-athletes safe. All returning players were tested with an antibody test and diagnostic test upon arrival. However, one SMU football player was concerned with the lack of tests from that point on.

“It’s crazy, man,” the player said. “All these people just getting sick in Texas and we [are] getting tested just that first day. People just aren’t listening. What if you get sick day two, day three?”

The plan states that all athletes who do not test positive for the virus will enter into a phased training program over the next two months. The only mechanism for monitoring players’ health, after an initial passed test, will be with daily temperature checks and a health questionnaire, according to the released plan.

“I’m not a doctor. I don’t pretend to know everything about this. I want to play, believe me, we want to play. But it just doesn’t make you feel good knowing that first test will be it,” the same player continued. “We are preparing for the fall, and I guess this is the only way, but I don’t know.”

Other universities have come out with versions of continued testing. Baylor University indicated they would be installing systematically randomized tests after the initial testing is complete.

SMU has only outlined for continued tests on student-athletes who test positive on the day of return. Those athletes will be quarantined for two weeks and then tested twice more before returning to team activities. It is still unknown where sick players will be quarantined.

The same SMU football player also held grievances with the speed at which the phased-in plan develops. After one week, limited weight room access is set to become available. Two weeks after the initial report date, the number of athletes allowed in a workout group will jump from 10 to 50.

“I have friends who play at other schools and they have been saying the same thing. People are getting sick. Weight rooms, all of it, it is just quick,” the anonymous SMU football player said. “I don’t know what is going to happen.”

Another player echoed this sentiment, stating it “just felt too soon.” When asked if there would be more comfort if SMU had delayed coming back until July, as Oklahoma University’s football team is doing, he was also skeptical.

“The more time, yeah that always helps. It just doesn’t seem to be getting better, so I don’t know if I have a specific date in mind. It just feels too soon,” the player said. “I just have this feeling.”

SMU’s plan does come at a time when the number of coronavirus cases and hospitalizations in Texas, and Dallas, are spiking to their highest levels since the outbreak. Dallas County reported 413 new cases on Wednesday with nine deaths. At SMU specifically, four staff members tested positive for the virus this week along five student-athletes from multiple sports. The university has said three players are asymptomatic and two showed “mild” symptoms.

No players interviewed had preexisting health conditions that would make them uniquely affected by the coronavirus. However, when the same player who felt it was “too soon” to go back to training was asked about this aspect of the plan, he raised more doubt.

“I don’t have [preexisting conditions], but I know people do. There are guys who have stuff like that. People always think [student-athletes] are big and strong but we have our issues too,” the player said.