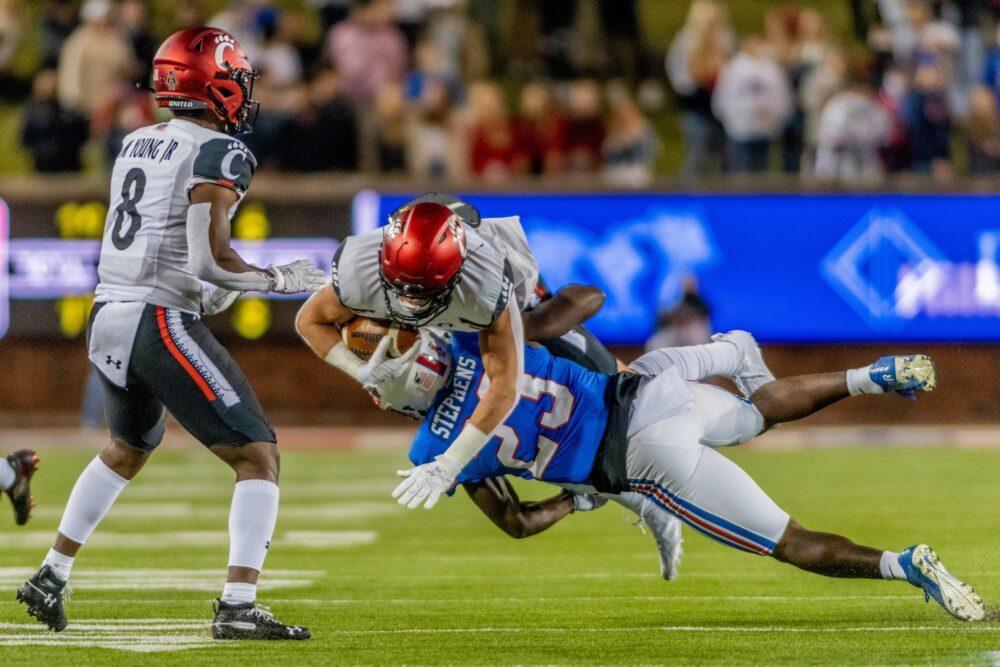 Here are some keys to this Halloween matchup:

The last time these two teams clashed, Navy overcame an 11-point halftime deficit to upset SMU 35-28 at home. It handed SMU its second loss last season. Navy nearly doubled SMU in time of possession and out gained the Mustangs by almost 200 yards.

SMU is coming off of a 42-13 defeat against Cincinnati in the school’s first home game between ranked teams since the Death Penalty.

Navy hopes to bounce back from a 37-21 loss to Houston.

SMU struggled to defend the run against Cincinnati, allowing 313 rushing yards and nearly nine yards per carry. The loss was punctuated by a 92-yard rushing touchdown by Bearcats’ quarterback Desmond Ridder who finished with eight carries for 179 yards and three touchdowns.

The defense will need to find answers quickly before its matchup with Navy, a team built on running the football with the triple option. While the Navy offense has struggled to score so far this season, averaging just 19.3 points per game, it has run the ball on 82.5% of its offensive plays.

The SMU offense struggled to find a rhythm against Cincinnati, totaling 290 yards of offense. In the previous five games,SMU averaged 563.2 yards per game.

The passing attack seemed to suffer from the absence of Reggie Roberson Jr. with a few key drops from tight end Kylen Granson and wide receiver Rashee Rice taking points off the board. Quarterback Shane Buechele posted his worst completion percentage this season, completing just 23-of-44 passes for 216 yards.

On the flip side, the offense tied its worst rushing output of the year with just 75 rushing yards and recorded less than two yards per carry. Running backs Ulysses Bentley and Tyler Lavine were unable to make big plays with the longest run between them going for just 13 yards.

If there were a defense for SMU to regain its offensive identity against, it would be this Navy defense which has struggled against prominent offenses this season. It allowed 55 points against BYU, 40 against Air Force and 37 against Houston, all teams with high-powered offenses.

Despite its loss against Cincinnati, SMU is still very much in the mix for a conference title and a berth in a New Year’s Six bowl. The team currently sits tied for third in the American Athletic Conference with Memphis, but controls its own destiny.

Ups and Downs for the Midshipmen

Navy started the season on a rough note with a 55-3 loss to BYU but rebounded strongly with three conference wins over Tulane, Temple and East Carolina. Despite their recent loss to Houston, this team presents many challenges to any opponent due to the uniqueness of its offense.

Navy has had SMU’s number in recent years, having won nine of the last 10 matchups between the two. The last time these two teams met in Dallas, the Mustangs pulled out a 31-30 win in overtime.