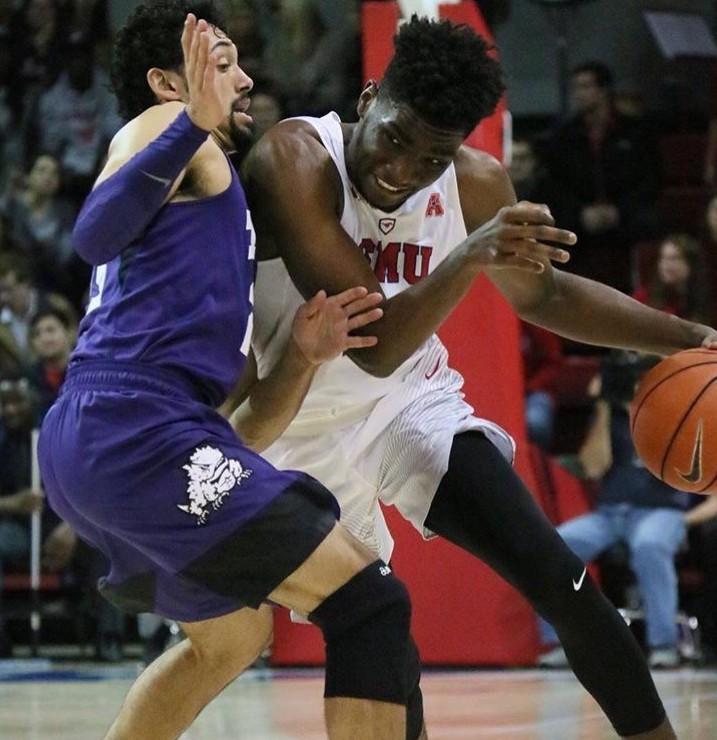 With 13:30 left in the first half, Ben Emelogu dished the ball to Semi Ojeleye near the charity stripe. Ojeleye’s pump-fake drew TCU’s Brandon Parrish away from Shake Milton in the right corner, leaving him wide open for a three. It worked so nice, SMU called it twice. On the next possession, Emelogu passed the ball back out to Jarrey Foster, who found Milton alone in the corner again. Swish. Mustangs up 19-8.

This minute of great offensive execution sums up how SMU played against crosstown rival TCU on Dec. 7. The Mustangs played with energy and moved the ball better than they have all season. The 74-59 win over TCU was the first blemish on the Horned Frogs’ record so far.

“We were clicking on both ends in a lot of ways,” SMU head coach Tim Jankovich said in the postgame press conference. “The crowd was outstanding. I think we are a team that is growing.”

For a team that returns only four players from last season’s roster and has so few minutes coming off the bench, limiting mistakes is key for Jankovich. The Mustangs’ performance against TCU was a return to last season’s form. The SMU team that showed its youth through its first nine games was nowhere near the building Wednesday night.

“We needed this win,” SMU forward Semi Ojeleye said postgame. “We’re a better team than we play sometimes. Sometimes I think we don’t play to our capability.”

Ojeleye finished with 23 points, seven rebounds, three assists and two blocks. It was his ninth double-digit scoring performance of the season and the sixth game he has led the team in points.

“They’re one of the rivals that we have,” Brown said postgame. “It just feels good to beat them and get the win for the school, coaches and everybody else.”

Brown was the only SMU starter to not score in double figures, but grabbed four rebounds and played one of his better defensive games of the season.

SMU’s energy on offense carried over to the opposite end of the floor. While the Mustangs did allow TCU to shoot 43 percent from the field, SMU allowed the Horned Frogs to shoot only 27 percent from three-point range, tied for a season-low. The Mustangs also out-rebounded TCU 24-21 on the defensive glass.

“We got outplayed,” TCU head coach Jamie Dixon said postgame. “The rebound was what we emphasized, we didn’t get it done.”

The Mustangs took extreme care of the ball for the first time this season, turning the ball over only five times against a TCU team that entered the game forcing turnovers on 26 percent of opponent possessions. SMU came in averaging 14 turnovers per game, but set a new season-low against the Horned Frogs. TCU earned only seven points off of Mustangs turnovers to SMU’s 14.

“I didn’t think we were aggressive enough going after the ball,” Dixon said.

“We always want to take care of the ball,” SMU forward Ben Moore said postgame. “We knew they played some pressure defense and we were just working on different things in practice and the coaches got us prepared for that.”

Jankovich said the team’s performance against TCU was an indication of how the Mustangs are learning and growing.

“We’re evolving,” Jankovich said. “We did some things tonight that we feel moving forward are going to help us. I think a lot of that is a result of playing such a difficult preseason schedule so far and learning some tough lessons.”

SMU is going through the growing pains of losing a lot of experience and playing such a non-traditional type of basketball. It is a process, and SMU is coming along. The bench is becoming longer with guard Ben Emelogu and freshman forward Harry Froling finding new ways to contribute.

“I think Harry is getting better and better and more confident,” Jankovich said. “The only reason why Harry sometimes doesn’t play more is because Semi and Ben are playing so darn good.”

Confidence will undoubtedly be a major factor in this young team’s success, and a win against a rival helps. The Horned Frogs have made noise early on, averaging 82 points per game and outscoring opponents by an average of 17.1 points. SMU held TCU to their lowest point total of the season.

“Our guys were outstanding,” Jankovich said. “Made very few mistakes, at least from where I was sitting. It felt like we were about as on point as we’ve been at any time during the year, and that’s very encouraging to me.”