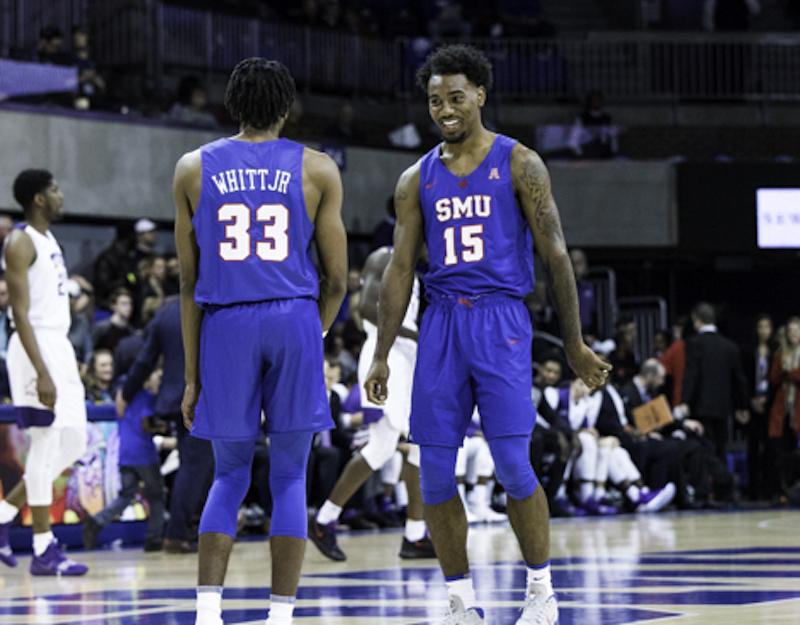 At a critical point in their season, the SMU Mustangs went on the road for two games against conference powers.

They were 4-3 in conference play going into the road trip. The Mustangs had the chance to separate themselves from the middle of the AAC pack with road wins, or slide further down with losses. They fought hard but lost both, falling 85-83 to Wichita State on Wednesday before losing 73-68 to Cincinnati Saturday night.

Last year, the thought of back-to-back games in Wichita and Cincinnati would have been among the most daunting in the country. Both teams were ranked and had rosters stacked with savvy veterans. This year, the path was slightly easier. The Shockers were 8-11 overall and 1-6 in AAC play going into their game with the Mustangs, losing key players to transfers, graduation and an early departure to the NBA. Mick Cronin has withstood big losses but still has Cincinnati near the top of the conference.

With a dearth of talent on each squad, SMU has the goods to hang with each team, even on the road. The team got going offensively, extenuated by the fact that Isiaha Mike is coming around, emerging as a legitimate offensive weapon. Following a 20-point outing in SMU’s final game before its road trip, Mike put up 25 in Wichita and 17 in Cincinnati.

The problem for SMU was defense and late game execution. The Mustangs allowed Wichita State to top 80 points, something that had happened just once previously in the season. Against the Shockers, it was outside shooting that plagued SMU, as the Shockers hit 10 of 21 3-pointers. They also moved the ball well, totaling 19 assists.

The game was tightly contested throughout, as SMU built an 11-point lead in the first half, but Wichita State came back quickly to tie it up five minutes into the second half. The teams went back and forth throughout the final half, and Jimmy Whitt hit a jumpshot to tie the game up with 18 seconds left. But on the ensuing possession he gave the points right back, getting roasted on a drive by Samajae Haynes-Jones who hung and hit a tricky reverse layup for the win.

Against Cincinnati, the Mustangs played hard to make the game close at the end. After trailing for most of the game, SMU held the Bearcats scoreless for a stretch that lasted nearly five minutes, cutting the deficit to two points. Still, SMU had no answer for Bearcat guard Jarron Cumberland. Cincinnati’s best player finished with 24 points, nine rebounds and five assists. He knocked down 3s when he got space, sprayed passes to open teammates and was physical on both ends. Cumberland embodies the hard-nosed, smart basketball that Cincinnati plays. SMU hasn’t had a player like him since Sterling Brown.

Still, SMU found itself in a position to steal a win. A Jahmal McMurray 3-pointer brought the Mustangs within one with 2:50 remaining, but SMU mismanaged the end of the game. Ethan Chargois was whistled for a “hook and hold” flagrant foul, and missed a 3 after Cincinnati’s Nysier Brooks split the free throws. SMU had a chance to tie the game after an impressive Feron Hunt block, but its possession stagnated. A few harmless set-up passes led to an isolation for Mike; he picked up his dribble in no man’s land and threw the ball away. Later in the game, SMU stole the inbounds pass down two, but the game-tying possession went no better. Jimmy Whitt took a deep contested 2-pointer and bricked it off the backboard. SMU final last-gasp chance to tie it was unsuccessful as McMurray air balled a 3-pointer.

SMU showed flashes in its two road losses. Mike has the look of a dynamic all-around scoring threat, and freshman Feron Hunt’s athleticism came up big in the Cincinnati game, his first career start. Still, the team has a long way to go. It goes through stretches where it can’t get a stop and hasn’t shown the ability to consistently close out games. Twenty-one games in, the chance to turn around the season is fading.