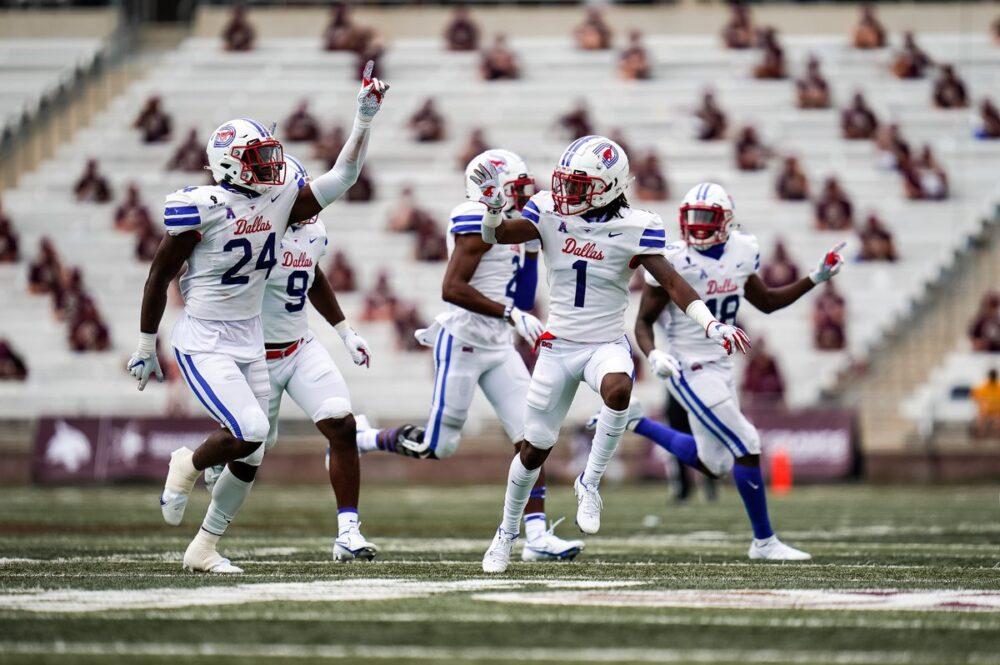 SAN MARCOS, Texas — Texas State head coach Jake Spavital said in the lead up to Saturday’s contest he wasn’t sure when it would start to feel like an actual game week. After months of the coronavirus, limited practices and protocols, the game itself almost felt like a mirage.

And following the first FBS college football game in the state of Texas Saturday night, Spavital concluded it never really did sink in this day happened at all.

“I never felt like it was a true game day. You drive up to the parking lot and there are no cars,” Spavital said in the post-game press conference for Texas State. “I didn’t look up too often, but you see the fans and they are spread out across the bleachers. I thought it was unique.”

On the football side, SMU squeaked past an undermanned Bobcats team, 31-24. Texas State, playing down players from those who tested positive for the coronavirus earlier in the week, at one point had to play a fullback at defensive tackle. The play on the field was sloppy, indicative of the month’s layover and the novelty of the entire event.

The first drive of the game said everything about what this day was. The inaugural play of the season resulted in Texas State quarterback Brady McBride losing his helmet. The next play, the snap sailed over the backup quarterback’s head. And, on a third and forever, running back Brock Sturges took a draw play 45 yards through a shocked SMU defense.

Ultimately, SMU survived. Shane Buechele threw for 367 yards but added more interceptions, two, than touchdowns, one. TJ McDaniel churned out 130 yards on the ground but also fumbled in the end zone that wiped out a touchdown. Two scores on this day, including a Kylen Granson 56-yard touchdown, were called back.

“It wasn’t always pretty. You could tell it was the first game of the season… I’m proud of our guys and how they have dealt with adversity,” SMU head coach Sonny Dykes said through a team spokesperson.

But today was not about the football. It was about the 25% capacity at Bobcat Stadium and the uniqueness of seeing the band take up the entire end zone in a socially distanced format. It was about the masks SMU wore over their helmet as a precautionary measure for the coronavirus. It was about seeing how, and if it was possible, to play college football in a world still dominated by a pandemic.

And just making it to this day, in this case, was an accomplishment. The circumstances surrounding the season opener only added to the surreal nature of it all.

Less than 24 hours prior to kickoff SMU heard from TCU the game next Friday had been canceled due to a breakout in Fort Worth. Things even earlier in the week for the game in San Marcos looked tenuous after multiple positive tests, including the backup quarterback, on Texas State’s football team.

Dykes mentioned SMU tested all 72 traveling players three times throughout the week and the group tested negative each time.

It was an atmosphere that was jarring. Players wore masks when they were without their helmets on for the majority of the afternoon. Texas State give its players the option to wear face shields on the helmet depending on their comfort level.

“They sacrificed. They didn’t go out as their friends were doing stuff. I think it was important to go out and play a football game and continue to play football games. I think it says a lot about our program,” Dykes said.

Of course, though, there was nothing anyone could do about the fans in the stands. The 7,500 fans that were allowed into the stadium had mixed results on whether they wore a mask or not. The stadium was loud at times but there were moments it was evident the 30,000 seat football cathedral was unusually empty for Texas State’s first ever nationally broadcast game.

The band was heard a little louder, Spavital said. The screams of the coaching staff could be heard sharply. At one point, Spavital was arguing with the officials over a dropped pass and every word could be heard from across the stadium. Another time, Granson came off a block on a Ulysses Bentley IV touchdown and could be heard screaming “oh my goodness” as he watched the play unfold. There was an intimacy to the game not normally felt in college football.

“I don’t think it started to feel like a real game until the second quarter,” McBride said. “Once we started to get into a groove we were able to go back and forth.”

Overall, the players felt it was odd. But it was still football. The game swung in the second half as Texas State was worn down. The tie game was broken by a pair of plays from Reggie Roberson Jr. and Bentley IV in the third quarter. There was even a brief injury scare with Roberson, who had his foot stepped on in the first half.

Every time the football threatened to make people forget about where and how this contest was being played, though, another reminder popped up. There were moments players had to space out, take off their helmets, and catch their breath from playing in a mask. Occasionally coaches forgot to pull up their gators.

It is all new and a work in progress. It will be all season in a college football world that is unlike anything the sport has seen.

“With all the ups and downs, the uncertainty, and the new normal protocols (it is a lot),” Spavital said. “The testing, those kids got tested three times this week and I can tell you it is not the most pleasant thing. But we do it and we don’t complain. We had an opportunity to play in front of national TV and I think our guys deserve that based on everything they have done.”

“I tell them all the time, football is not a game of perfect. With our social distance and everything, as long as we are doing that the majority of the time we will hold each other accountable. But I had a blast out there and I think this is a moment our kids will not forgot” he finished.